On the forest plot No. 333/340 (Włodawa Forest Inspectorate) there is a grave of six escapees from the Sobibór death camp. They were murdered in the second half of 1943, probably in October, when the camp prisoners under the command of captain Aleksander Pieczerski rose up in an armed uprising and escaped from the camp. We know the approximate location of the grave thanks to the account of an inhabitant of Zbereże (born in 1928). We also know that, together with six escapees from the camp, the remains of two local Jewsin are buried either in the same pit or right next to it. The two men ran a liquor store in Zbereże. A father and son named Wenecki were murdered on the same day as the escapees from the extermination camp.

Jan D., a resident of Zbereże, born in 1928, witnessed the capture of a group of escapees from the death camp in Sobibór:

“There was a German watchtower. There were ditches and mounds of earth about half a meter high. The ditches were left as a barrier against the guerrillas so that they would not attack the Germans in their beds while they were sleeping. From the inside, there was an opening to the outside. There were wire fences all around and a gate. When Jews escaped from Sobibór, they walked along this forest between the lake and Sobibór. They went this way. And here they came across this watchtower and the Germans caught them. I was grazing the cows, because our pasture was here, all the way to the railway track. […]They got to the watchtower and the Germans saw them. I heard two shots. The Germans were shooting and Jews started to run away. There used to be a road here. I was walking along it and wondering where they had buried them. I came to this field and saw freshly dug sand. I walked closer and saw that it was strewn evenly and trampled with shoes.

– When were you there? The day after the execution?

Two men from Zbereże died together with the insurgents from Sobibór: “There were six of them [escapees from the Sobibór camp], and the other two used to have a liquor store in our village, they sold vodka, Jews, father and son, the son was also over 15 years old. […] When they caught them [the escapees from Sobibór], they also joined the vodka seller with his son. […] They were called Wenecki, I don’t know what their last name was. People have always said, “Go to Wenecki and buy vodka”. He had nothing more but vodka.” (Zbereże, July 2014)

Jan also remembered the Jews who lived in Zbereże until the war: “About eight [Jewish] families lived here. There were two elderly seamstresses. They lived there, half a kilometer away. They took them to Sobibór. The Germans rented carts and took them away. […] There were about ten families in total. One man was a glazier, another one was a fisherman, he lived here. […]

– Was there a synagogue here?

– No, only in Włodawa. Here they gathered at this fisherman’s.

– Yes. He had a big house and they all gathered there. When we grazed the cows, we often heard them having a holiday on Saturday. We always listened to them singing. Their prayers took place there. (Zbereże, 22 July 2014)

There are at least two more unmarked Jewish graves in Zbereże: “There was a Jew in our village, I remember his name – Ginsberg. Two of his sons went to school with me. There was a second watchtower here, the Germans were also guarding it. There was a trench from this watchtower to the Bug river. The Germans took the old Ginsberg and led him through this trench. Next to the river, the Germans killed him in this trench and buried him. But the Bug plucked off the ground every year, until the Russians on the other side noticed that a man was buried there. It turned out that it was this killed Jew. […] They should put them in a coffin and bury him in the Jewish cemetery in Chełm, and make an inscription where he came from.” (Zbereże, 22 July 2014)

Thanks to Jan’s account, we also know the fate of the eldest son of Ginsberg from Zbereże: “There was an Orthodox church there, which I don’t remember. But my parents used to remember. It was made of wood. And there was a German bunker in the center, and the cannon was concreted there.

– So one of the sons of this Ginsberg …?

– Yes, he was killed behind this cannon. I even know more or less where. I showed people who had been here before you where the Germans had buried him. They did not want to do it in the field because the field was plowed.

– What about these two other sons?

– These young ones were probably taken to Sobibór by cart.

– And you don’t remember their names?

– These sons? The one killed behind the cannon was Szlomcha. I don’t remember the other two anymore. Szlomcha was the oldest

– About twenty, I guess.

– And the two younger ones?

Jan also shared his memories about the functioning of the death camp in Sobibór: “We grazed the cows there. At three, after lunch, there was a transport. We saw people in the windows and we counted carriages. It was always the same. And every week a plane landed and took away the gold from those people who had been brought here … […] It was forbidden to walk near these wires and watch. Only the workers who were loading these wagons were allowed to stay nearby. Some of the women would take fried geese and ducks and vodka from the village and went to spend a night there. The guards were giving these women some things. Around this ghetto, in the forest, it was easy to fall because of the bottles. Visiting the surrounding villages was like going to department stores. They sold clothes, coats, shoes. When they were transporting Jews from Czech Republic, they said that they were transporting them in service wagons. […]

– Do you remember the smoke rising above the forest?

– When they were burning? It was in front of the forest. We lived seven kilometers away. While we were grazing the cows, we saw a black cloud hovering over Sobibór. When there was no wind, the cloud grew huge, and in the evening, the smoke spread all over the area. Even the cows roared. In the evening, we closed the door in the village because of the smell. When they lit the fire it was like a star, shining for nine months. The sky was all red. More transports were still coming. Oh, what a stench it was. (Zbereże, 22 July 2014)

The place of the grave was marked with a wooden matzevah as part of the project “Reference points”. The project is an attempt to find a way to mark the grave sites before they can be commemorated. The action was aimed as an intervention in the landscape of these places, which would remind about what remains invisible, even if present in the memory of local communities. Being only a temporary commemoration, wooden matzevot invite local communities to discuss and take action, to discover the places, and perhaps to start their own memory practice related to them or to permanently commemorate them.

On November 28, 2013, a site inspection was carried out in the presence of a witness who indicated the approximate location of the mass grave of 8 victims (GPS: N 51°23.539 ‘E 023°39.711’). This place is located close to the forest track leading to the Orthodox cemetery. During the next site inspection on July 22, 2014, the site was selected in accordance with the witness’s indication, in order to conduct research with the use of GPR. On GPR profiles named: ZBE10001-ZBE10003, anomalies were recorded at approx. 0.2 m to approx. 4.5 m, at a depth of approx. 0.75 m below sea level.

On November 28, 2013, a site inspection was carried out in the presence of a witness who indicated the approximate location of a single grave (GPS: N 51°23.183 ‘E023°39.611’). The indicated place is located at the entrance to the village, next to the ruins of the bunker.

GPR survey is not helpful in this case.

The LiDAR survey is not helpful in this case. 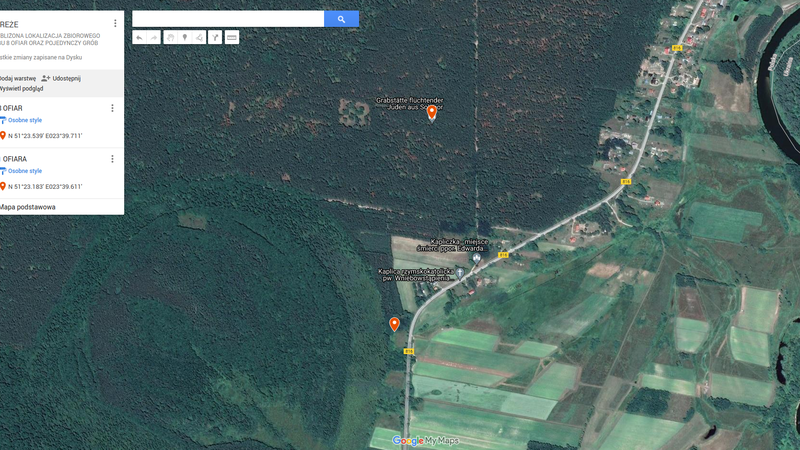 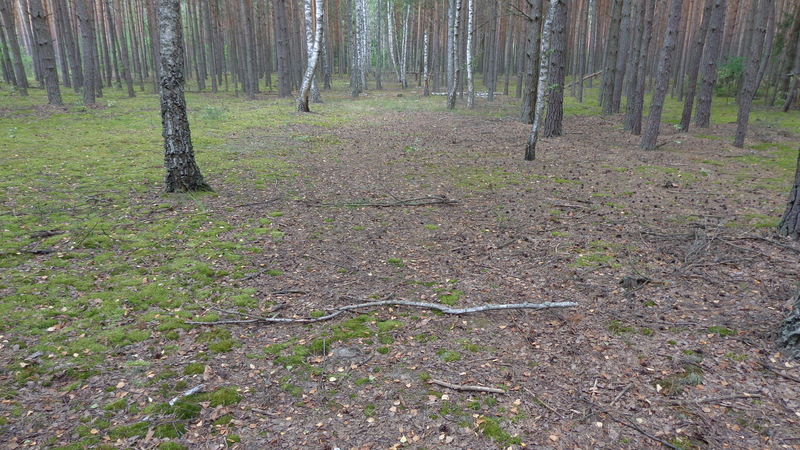 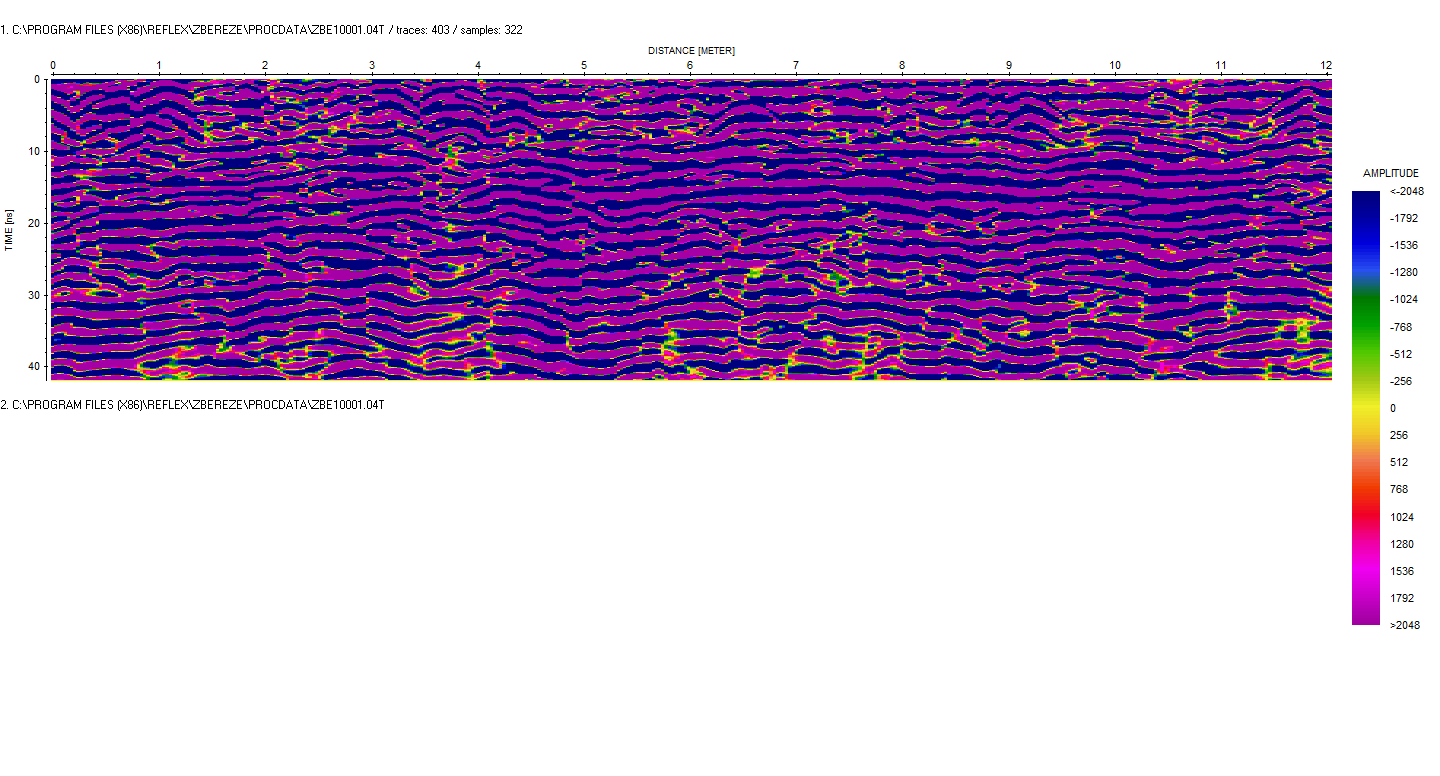 We are still looking for information on the identity of the victims and the location of Jewish graves in Zbereże If you know something more, write to us at the following address: fundacjazapomniane@gmail.com.