An arable field near a road called Lipki (within the boundaries of the Michałów farm.)

In November 1942 approx. 70 Jewish women, men and children died in a mass murder in the Wożuczyn village. They used to work in a local sugar plant. They lived in a wooden shed adapted for human living. On that tragic day the Jews were called out in groups of four and shot in the back of their heads against the north-east wall of the shed. Their bodies were taken away on a sledge and buried on an arable field near a road called Lipki.

Marian Ż. (born in 1931): “I saw this event from the very beginning. Six military policemen from the police station in Rachanie came and summoned the so-called Werkschutz – employees trained in using rifles to protect the plant. Ukraine was near so they were afraid that an attack could happen at any point. So it was a kind of labourers’ police to protect the [sugar] plant. Sugar was a very sought after product during the occupation so it needed protection. The Germans couldn’t cover the whole area, they had small ‘islands’ of their garrisons which served as bases for their forays. So they came, summoned the Werkschutz and told them to surround the area where the shed was located. They instructed them to shoot if any of the Jews would try to escape. [The Jews who were in the shed] were brought from somewhere by the Germans but I don’t know where from. They were not local Jews. They brought them with their families – wives, children. The range of people varied from intellectuals to various craftsmen. There were about 100 people in this shed. The shed was adapted – there was a large kitchen, a bathroom, everything ready for them to live there.

Every morning the Jewish police organised these people – they formed a column and walked like that to work, every day at the same time. They worked in the sugar plant. […] While walking, they were obliged to sing: ‘Marshal Rydz-Śmigły didn’t teach us anything but our brilliant Hitler taught us to work.’ Everyday thay had to sing the same song. They’d been working for a few months – I think since 1942, when they arrived. Firstly, the shed was adapted and then the whole group was brought in. They weren’t supervised by the Germans but by the Jewish police, so children and all those families could walk freely around the area.

I used to live there. It was a building in which several families used to live. I saw the shed [where Jewish labourers lived] from a window on the first floor. This shed was removed later and now there is a brick building there. There is no trace of that shed left. The grave that was dug for them was located on an arable field near a road called Lipki. I heard about it [the murder in Siemnice] and went to see where they were shot; other boys and I went there to see holes in the fence. They placed them in front of the fence in a row and [killed them] with machine guns. And the bullets were still in the fence. We took them out. I didn’t go to this area anymore – I couldn’t because it affected me so much.

The night before [the liquidation of the Wożuczyn sugar plant employees] some of the Jewish intellectuals disappeared. They just ran away. They must have had places to stay ready in surrounding villages. They left the shed with their families.

They [the Germans] had only handguns, not automatic rifles. They called out groups of four and those people had to run to the place where they were told to kneel and then they were shot in the back of the head. Four military policemen were allocated [to shooting] and two to calling them out from the hut. When a mother with a child was walking, he grabbed her child by the leg, shot it in the head and threw on the top of the pile of corpses. She went mad. It was terrible…

Then knocking out gold teeth commenced. A man called Wiater did it, I don’t remember his first name. It was an employee who was responsible for keeping order in the settlement. He grabbed the hair covered in blood and shook out the teeth and gave them to Hans [one of the policemen]. I saw it with my own eyes. Later a sledge arrived and waited until the dental check of all the old people ended. Earlier, one of the military policemen took whatever they had, rings and all, before they left [the shed.] So only gold teeth were left. When they finished knocking off teeth, they started placing them [the bodies] on the sledge. They did several transports. No one was undressed, they ran as they were standing because they were told to run to the place where [they were killed]: ‘schnell, schnell!’ (Bytom, 10 May 2017.)

In 1950 a judge from the Criminal Municipal Court in Tomaszów Lubelski, accompanied by two eyewitnesses, did a site inspection of the Jewish mass grave. As a result a description of the grave was written together with its exact location. This is how this place looked like in 1950: “The common grave is rectangular: 15 metres long and 6 metres wide. The grave does not have a mound, in two places it is sunken – about 20 cm deep. It is located in a field within the borders of the Michałów farm. According to the eyewitnesses present at the site inspection, bodies of approx. 50 people were buried in the grave – both men and women, including two children who were murdered on the square of the Wożuczyn sugar plant in November 1940. Some of the murdered Jews used to work in the Wożuczyn sugar plant while approx. 25 people were brought in from the surrounding villages.” (IPN BU 175/166, p.1)

Jan S. who as a young apprentice worked on the Squire Holtzer’s estate was an eyewitness to the murder mentioned by Marian Ż. This event was meant to take place in October 1942: “That day in the morning […] we saw Jewish labourers gathering around the nearby warehouse. After a while Germans led several people to a nearby hill. The first group included men, women and children. I saw all the Jews kneeling and Germans shooting them in the back with automatic [rifles.] After the execution the SS-men called several local men and ordered them to dig a deep ditch.” (Jan S.’s account, Fundacja Zapomniane’s archives.)

The IPN archives also hold information about a murder of 13 Jews committed in Michałów in 1942. Four men, four women and five children were killed by military policemen from the police station in Rachanie. Bodies of the murdered people were buried in a mass grave dug by several local residents. (IPN BU 2448/596, p. 3-4) 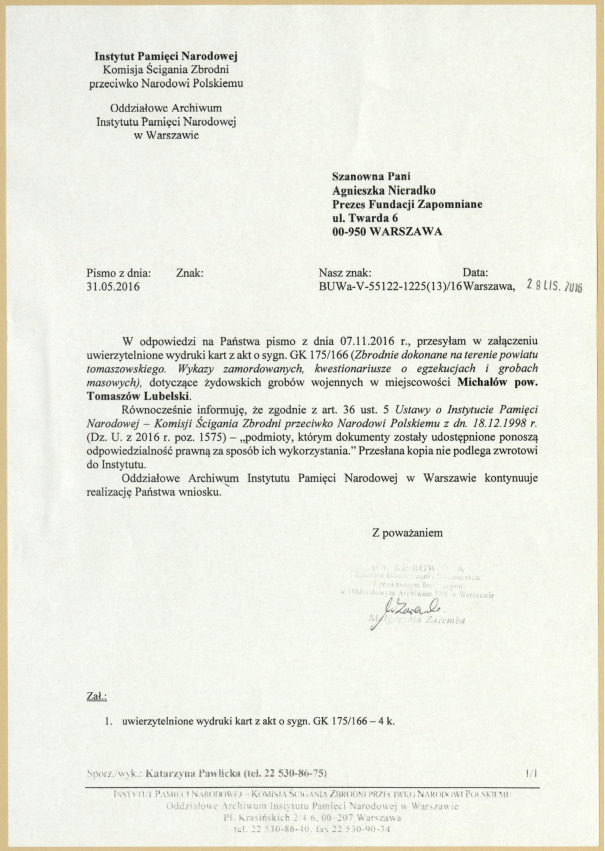 We are still looking for information on the identity of the victims and the location of Jewish graves in Wożuczyn. If you know something more, write to us at the following address: fundacjazapomniane@gmail.com.

IPN BU 175/166, p. 1, Report of the external inspection of the mass grave of Jewish civilians murdered by the Germans (original spelling) in November 1942 and located on the field belonging to the Michałów farm of 10 May 1950.

Mr. Marian’s account with a map showing the crime scene and the approximate location of the grave.

Recording of the Zapomniane Foundation (audio file) and a map showing the crime scene and the approximate location of the grave, name: Marian [eyewitness], b. [lack of data], subject and keywords: Jewish graves in Wożuczyn, interviewed by Agnieszka Nieradko, Bytom, 10 May 2017.