A Jewish grave on a meadow near the Orthodox church’s bell tower.

In October 1942 on a meadow near the Orthodox church military policemen from Uchanie shot to death 60 Jews from Wojsławice, including 20 children up to 14 years old.

The shocking events from October 1942 are recalled by a resident of Wojsławice, born in 1920: “I also remember these 30 Jews killed during the war behind the Orthodox church, near the bell tower. There was a bakery and on a meadow behind the bakery 30 Jews were buried. I know this place more or less. I saw these Jews. We were not allowed to [come close]… But somehow we saw it. They were shooing us away but I wanted to see those people. My heart was breaking, I couldn’t watch. Germans killed 30 people on this meadow. I remember blood, the meadow was red with their blood. So I, as a young girl… I felt sorry for these people. A mother covered a 2.5-year-old child with her body. ‘Mame!’ – the child was screaming, I remember [that] – ‘Mame!’ But a German turned around and killed this child. I agonized over that so much that I couldn’t eat or sleep for two days, I was so scared. I can’t forget this, it stuck in my memory… How can you kill so many people and also a child that was shouting ‘Mame!’ She must have crawled out from under her mother’s body. They killed this child. The German went back and killed the child. I felt such sorrow, I couldn’t get over this. For two days I could neither eat nor sleep.” (Wojsławice, 4 May 2015.)

Another resident of Wojsławice recalls the execution in a similar manner. She was 14-15 years old at that time: “I remember 30 Jews exactly and there was a small child as well – 2-3 years old. I came when they were already on the square to be shot. My mum told me: ‘Don’t go, you are too young to witness something like that.’ I couldn’t… they were people, right? So I went. I cried but it didn’t help me. So many people were killed. We were told there were 30 people. I came when they’d been already dead. I heard the gunshots because I was nearby. I came closer. They dug a ditch and threw [them] into this ditch like herrings.

The Jews had to dig this ditch themselves! I know where it was. I couldn’t eat anything for 2 days! Two days! Nothing, even water, such was this experience. We knew these people, shopped in their shops, they were our neighbours, they were close to us. And they were really friendly.

I was 15-20 metres away when they’d been already shot, [I didn’t come] when they were being shot. I only heard a child. When they shot those people, [I heard] ‘Mami!’ A mother covered her child with her body! And it came out from under her, crawled out after they were shot. The Germans hadn’t left yet. And the child [screamed]: ‘Mami!’ I heard it. He went back and killed it. I couldn’t get over it, I couldn’t eat for two days. I felt sorry for the child.” (Wojsławice, 4 May 2015.)

The view of the bodies of the murdered Jews had been etched forever in another resident’s memories. She ignored her parents’ ban and went to the place of execution: “Well, I was still at school then. In our town they [Jews] stayed for a longer time, apparently they had gold. Our town was rich. But it got to a point when they had nothing more to pay [for their lives.] My parents didn’t allow me [to go] but [I went] out of curiosity. It was important, it was terrible. Later I was sick, I couldn’t sleep at night, I cried because I saw everything. It was terrible, I was 12 years old and I suffered a lot. And I saw everything – Germans had just left and it was a pile of sorts, people [lying] on other people. They probably ordered them to lie like that and shot them. Whole families and even young children. Despite the ban – because my parents had forbidden me to go – [my friend] and I went there stealthily, we had to see it. We heard gunshots. They probably took them straight from their homes. I remember frost.

Everyone used to live well together, it didn’t matter that someone was a Jew. It was a nice town, people helped each other. And now there is no one… It’s unimaginable…” (Wojsławice, 4 May 2015.) 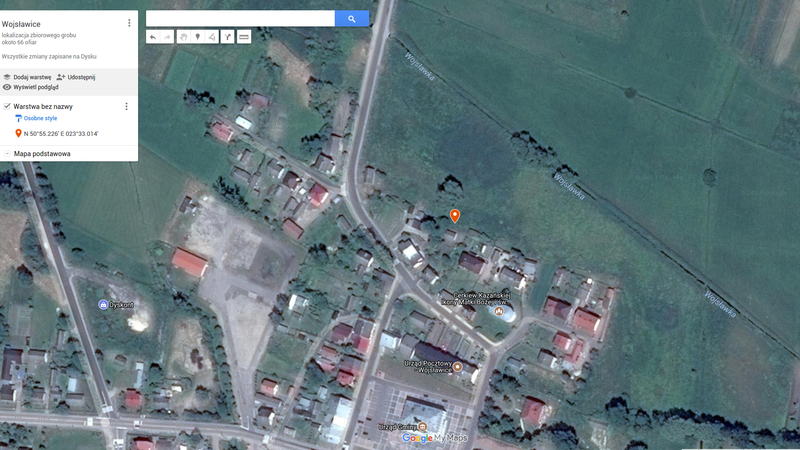 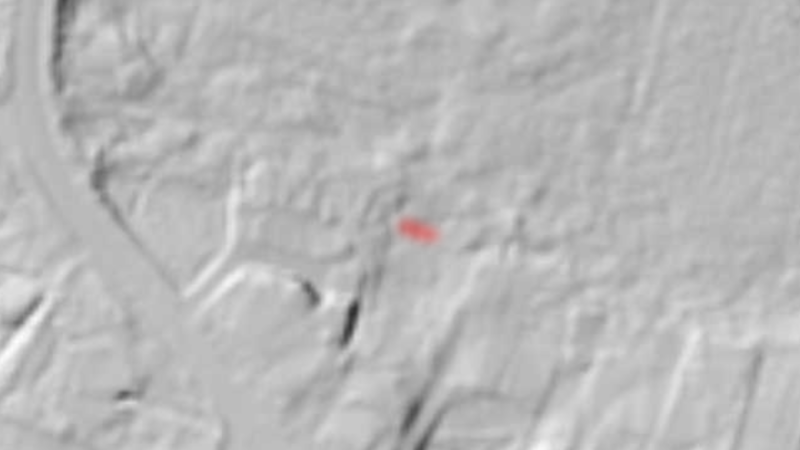 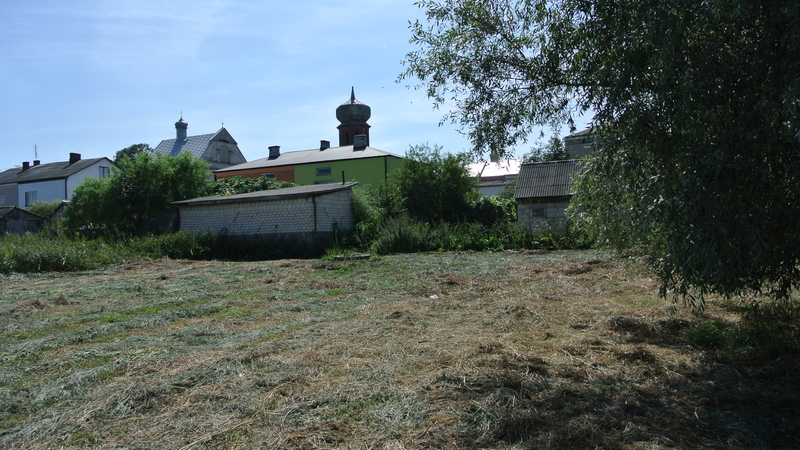 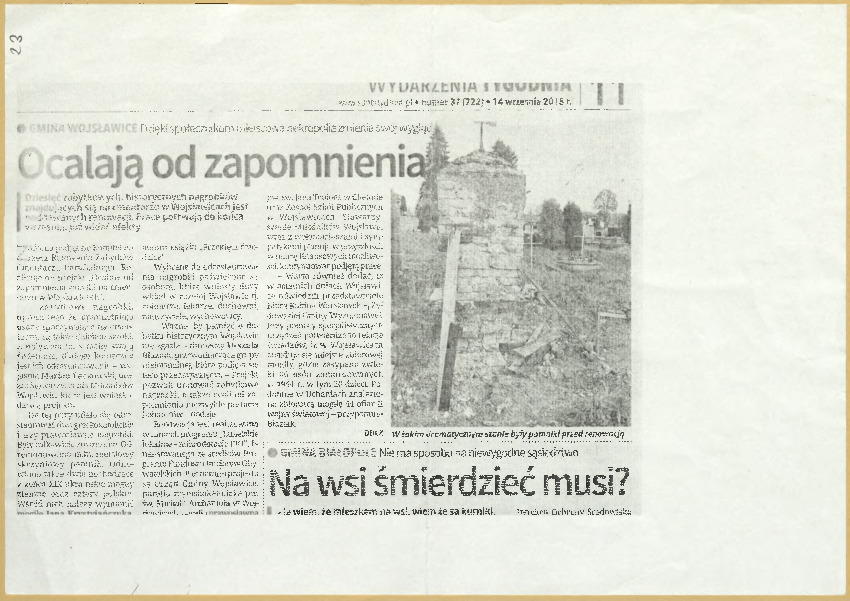 We are still looking for information on the identity of the victims and the location of Jewish graves in Wojsławice. If you know something more, write to us at the following address: fundacjazapomniane@gmail.com.

Recording of the Zapomniane Foundation (audio file), name: – [witness to the story], b. 1920, subject and keywords: Jewish graves in Wojsławice, inetviewed by Agnieszka Nieradko, Wojsławice, 4 May 2015.

Recording of the Zapomniane Foundation (audio file), name: – [witness to the story, a resident of Wojsławice, she was 14-15 years old during the war], b. 1931, subject and keywords: Jewish graves in Wojsławice, inetviewed by Agnieszka Nieradko, Wojsławice, 4 May 2015.

Recording of the Zapomniane Foundation (audio file), name: – [witness to the story, a resident of Wojsławice], b. –, subject and keywords: Jewish graves in, inetviewed by Agnieszka Nieradko, Wojsławice, 4 May 2015.

Copy of letter of the Institute of National Remembrance, the Regional Commission for the Examination of Crimes against the Polish Nation in Lublin to the Association of Wojsławice Enthusiasts regarding sources of information about the murders of Jews in Wojsławice from 17/08/2007

Copies of accounts of Mrs. Janina and Mrs. Helena about the extermination of Jews in Wojsławice recorded by Emil Majuk as part of the “Memory Scraps” project carried out by Panorama Kultur Association in cooperation with Ośrodek Brama Grodzka and the NN Theathre in Lublin.

Copies of photographs showing Helena and Janina pointing out the approximate location of the grave of murdered Jews in Wojsławice, 2009.