The Jewish cemetery in Szydłów. The so-called Knights’ Hall at the castle in Szydłów. A mass grave of the Holocaust victims. At least 6 people were laid to rest in the common grave.

In 1943 (the exact date unknown) approx. 30 Jews were shot to death in Szydłów, including 12 people from the Zelman family and 2 people from the Fiszl family. The names of the rest of the victims haven’t been established. Their bodies were buried on the Jewish cemetery in Szydłów and in random places (IPN Bu 2448/381).

It hasn’t been established as yet where exactly the graves are located on the cemetery.

In 2015 during an archaeological and architectural research conducted in the area of the so-called Knights’ Hall in the castle in Szydłów, a mass grave of Holocaust victims was discovered in the north-west corner of the western part of the palace. At least 6 people were laid to rest in the common grave. Thanks to the interviews with local residents the lead archaeologist established that the bodies probably belonged to the Jewish family of Zalemans (Zelmans) murdered by the Germans in 1942. According to some residents of Szydłów the murdered people came from the nearby village of Kurozwęki. It’s difficult to decide whether it was the same family that was mentioned in the document quoted above.

The mayor of the borough of Szydłów (at the time of the German occupation) testified in 1947 in front of the District Commission for Investigation of German Crimes in Radom that during the transport of Jews to Chmielnik in 1942 six people were murdered in Szydłów (elders and women.) Their bodies were buried on the Jewish cemetery (IPN GK 179/116.) 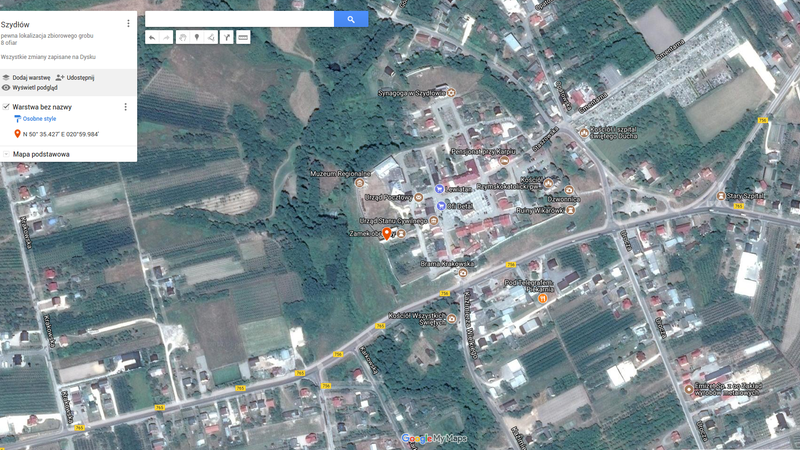 We are still looking for information on the identity of the victims and the location of Jewish graves in Szydłów. If you know something more, write to us at the following address: fundacjazapomniane@gmail.com.

GK 179/116, Files of the Regional Commission for the Examination of German Crimes in Radom regarding Jewish war graves in Szydłów, Staszów district, świętokrzyskie province.