On a private plot of land in the village of Staw there is a grave of an unknown number of Jews. They were slave laborers who regulated the river. The results of the source query carried out in the resources of the Institute of National Remembrance confirm that Jews were executed several times in the area of ​​Staw.

In June 1942, 35 Jews were murdered on the road from Chełm to Staw, 200 meters from the State Agricultural Farm building. (IPN BU 2448/553) The Scout Alert records the murder of one hundred Jews “in a nearby forest”. The description is accompanied by a drawing of the area with the execution site marked. “By the road, 200 meters from the State Agricultural Farm building in the direction of Chełm, there is a place of mass execution of Jews. In June 1942, 35 Jews were shot there. After a while, another 180 Jews were shot in the same place. At the same time, local Jews, including Lejba Freind and his family, were shot in Staw. Another Jewish man named Lejzor was hanged on a roadside chestnut. In order to cover up the traces of the crime, the bodies of these Jews were dug up and transported probably to Sobibór in Włodawa district.” (IPN GK 195/6)

On March 8, 1969, Franciszek M. from Ochoża, gave the following testimony to the district prosecutor’s office in Chełm about the crimes against Jews committed in Staw: “I saw the military policemen who rushed over a dozen (about 16) young Jewish women to the square in front of the windows of the borough building. I didn’t know where they were from, they were brought along the road from the side of Cyców. The gendarmes ordered these Jewish women to sing and after some time they escorted them towards Sawicki’s buildings. After a while I heard single shots from there. […] After leaving the borough building, in the ditch next to Sawicki’s buildings, I saw the bodies of Jewish women who I had previously seen from the windows. On the nearby chestnut tree, there were the corpses of two elderly Jews whom I didn’t know.” (IPN Lu 284/413 / vol. 1)

A resident of the Chełm borough, Jan W., born on May 25, 1930, also confirmed the existence of a collective grave: “… in 1940, to exterminate the Jews, to capture them. They forced Jews from Chełm to work. There was a mill and a small forest […] in Nowosiółki. The river was straightened from Nowosiółki to Staw. These Jews were digging the river. And to keep them here, when they dug this river to the Pond, there was a fire station. […] It’s still there. Wooden building. And they [the Germans] kept the Jews overnight in this building. After all the hard work by the river [the Garka river] in Staw, they locked them there. They stayed overnight there. It was very crowded there. Those Jews were weak, they were exhausted, they had nothing to eat. They were shot – here in “Olszynki”, in the field. They were buried in the collective grave. And in order to cover the traces, the Germans brought prisoners. It was a year later. Or maybe two? Or three? And they dug up these Jews and took them somewhere […] It was about 200 meters from the road. They hung sheets around them so that it was not visible what was going on there. It was not far from the road, about 150-200 m.” (Kolonia Krobonosz, 2018)

In the article “Siedliski sztetl” by A. Zawiaczyński, we can read about the circumstances of the murder and burying of Jews from Siedliszcze in Staw: “Before the war, there were about 2,500 of them [Jews] living in Siedliszcze. […] On June 1, 1940, the Germans established a ghetto in Siedliszcze. […] On October 22, 1942, a decision was made to liquidate the ghetto. The entire Jewish population, isolated in the ghetto, was to be sent to Sobibór. The wealthier (about 800 people) managed to bribe  the Germans with a large sum of money, and instead of going to an extermination camp, they ended up in a labor camp in Nowosiółki. The camp was located near the steam mill (formerly a water mill) by the Jew Lejzor, halfway between the Pond and Stołpie. The camp area adjoined the Uherka River and was fenced with barbed wire. The Jews from Siedliszcze, mainly imprisoned in it, worked on the regulation of the Garki river between Kolonia Ochoża-Parypse-Czułczyce-Jagodno. In Nowosiółki, prisoners were held in extremely difficult conditions. Very often they had to sleep on the ground and in the open air, hunger and work beyond strength completed the rest. They were punished with death for attempted escape or petty theft of vegetables or fruit, and the bodies of the dead were buried at the bottom of a dry mill pond. When the drainage works were completed and the free labor was unnecessary, everyone was driven to the nearby Staw, where on the left side of the road leading to Chełm (currently opposite the street leading to the parish cemetery), they were shot and buried in a mass grave, which they had to dig for themselves. (Today there is a building plot in this place, where the unevenness of the ground is covered with rubble and earth, and soon another house will probably be built there).

And in such a bestial way, Siedliszcze was deprived of the Jewish community, which had shaped its history for many years. ” (Voice of Siedliszcze, April 2020)

The place of the grave was marked with a wooden matzevah in 2020 as part of the project  “Reference points  – marking 24 Jewish war graves with wooden matzevot”. The project is an attempt to find a way of marking these places before they can be commemorated. Marking forgotten Jewish war graves with wooden matzevot is a subtle  intervention in the landscape reminding about what remains invisible, yet present in the memory of local communities. Being only a temporary commemoration, wooden matzevot invite local communities to discuss and take action, to discover the places, and perhaps to start their own memory practice related to them or to initiate a permanent commemoration.

On March 13, 2019, a site inspection was carried out at the place precisely indicated as the burial ground of the Holocaust victims (GPS: N 51°11.218 ‘E 023°24.210’). The location is characterized by an extensive and deep depression with a wet bottom. This place is located approx. 100 m from the road running from Staw to the village of Parypse. The relief image (LiDAR) clearly shows the depression with the approximate dimensions of 43 by 22 meters.

GPR survey has not been conducted due to the wet soil in this area. 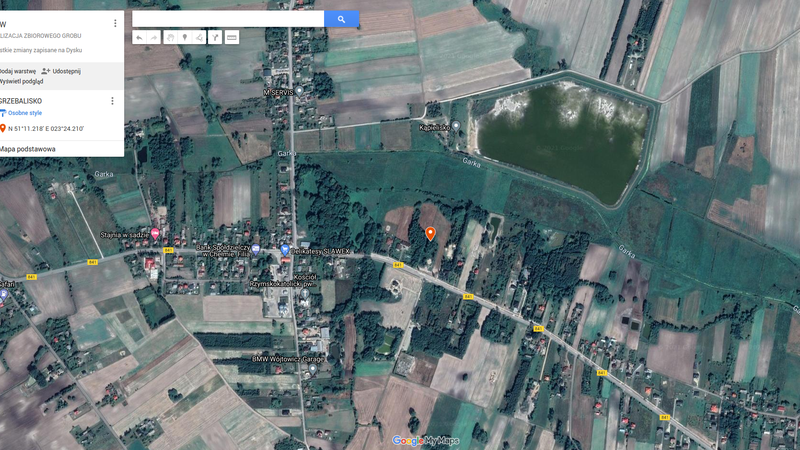 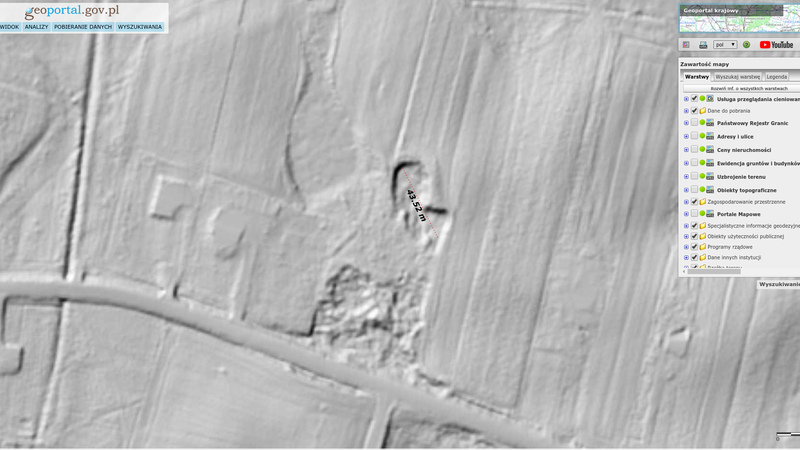 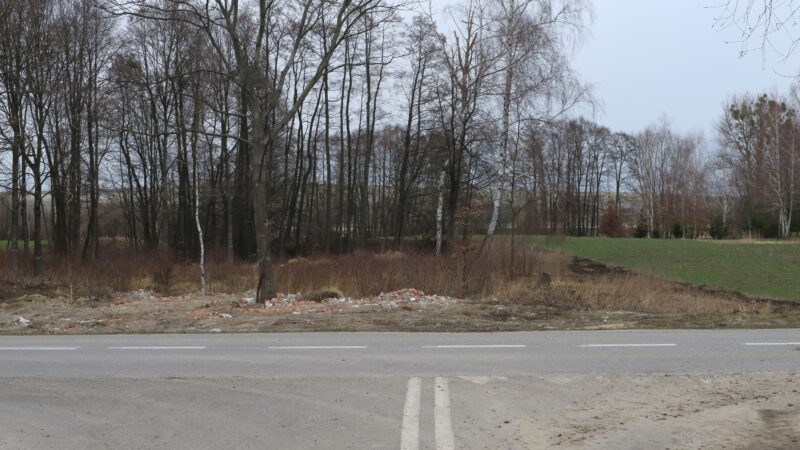 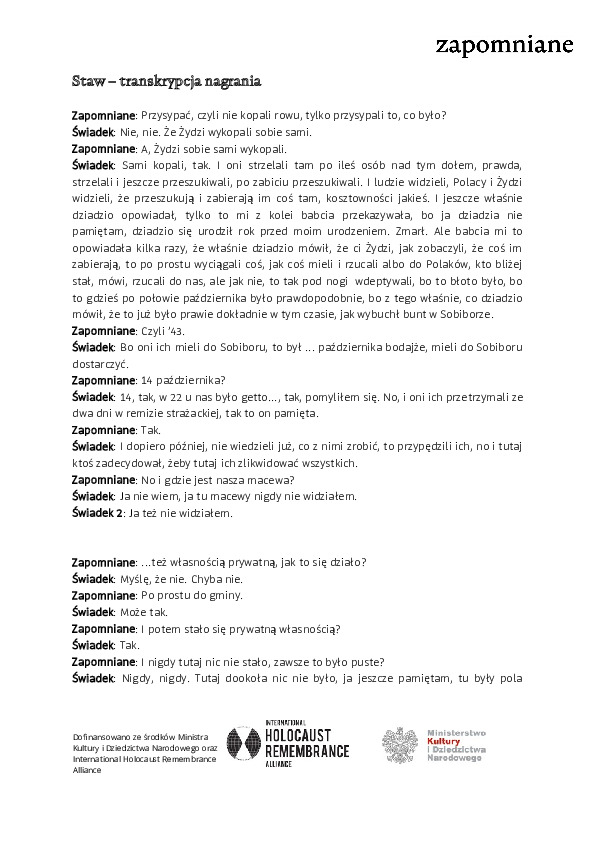 We are still looking for information on the identity of the victims and the location of Jewish graves in Staw. If you know something more, write to us at the following address: fundacjazapomniane@gmail.com.

IPN Lu 284/413 / vol. 1 Crimes committed in the years 1941-1942 by German and Ukrainian formations in the German and Jewish service in the villages: Parypse, Ochoża, Staw, Krobonosz, Chełm district.