Currently the Lipowa Ostoja estate is standing on the site of the graves.

The largest place of executions and mass burials in Pruszków were so-called clay pits near the brickyard. In 1939-1945 several hundred Christians, Jews and foreigners were meant to be killed there. It has been established that the majority of the victims came from the ghetto in Pruszków and the surrounding villages. Their bodies were buried in ditches, in the place of the execution. After the war exhumations were conducted. Out of approx. 800 victims, however, only approx. 78 were exhumed and moved to the parish cemetery. It can be assumed that the vast majority of the bodies remained within the clay pits area. Already in 1945, in the Questionnaire about mass executions and mass graves it was noted that the graves – estimated to be in several dozen – were difficult to find. They were single graves and those in which several dozen people were buried in layers. (IPN GK 163/45)

One name out of hundreds of victims was preserved. On 15 April 1943 Anna Tambeli was taken into care by the Tomaszewski family. She was a daughter of a Jewish woman. “Because the Germans from the SS didn’t find her home, they left a note that she would need to come forward. She went to the police station on her own and they never let her out. After the exhumation her body was moved to Zbikowo. She got a bullet in the back of her head. In the clay pits they were shooting Jews – children and adults.” (IPN BU 2448/1007)

In January 2017 we wrote down the memories of Jan W. (a resident of Pruszków born in 1932). According to him, there were many places of executions in Pruszków but the brickyard was the largest one.

After the war the area of the clay pits was exploited and in 2017 the Lipowa Ostoja estate was erected. 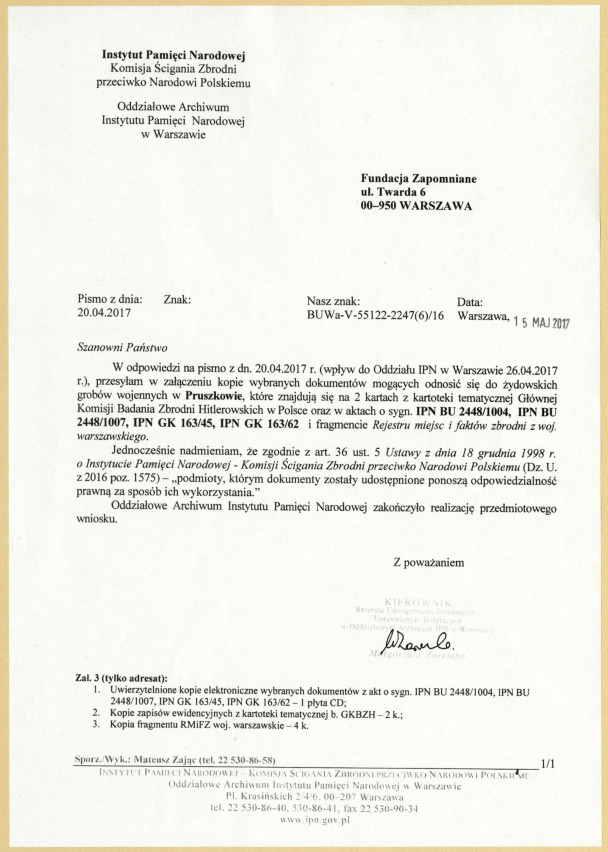 We are still looking for information on the identity of the victims and the location of Jewish graves in Pruszków. If you know something more, write to us at the following address: fundacjazapomniane@gmail.com.

Two cards from the thematic file of the Chief Commission for the Examination of German Crimes in Poland.