In the spring of 2021, we recorded an eyewitness account of the murder of two Jewish men of Czech or Slovak origin in Opoka. The crime was committed by Germans or Ukrainians in the German service. People who know the course of this event also indicated the burial place of the murdered. The account of Bolesław R. is particularly valuable. He is probably the last eyewitness to this crime. Moreover, the crime and burial site is on the border of his plot. His indication of the grave is accurate to several meters. The second witness also knows the burial place very well, because for many years the grave was marked with a wooden cane stuck into the grave. Unfortunately, the original appearance of this place has changed due to the construction of the embankment for the asphalt road, but both witnesses unanimously indicate the burial place under the roadside in Opoka.

“Two Jews from Końskowola came here. My mother said they could have been brothers. She noticed that they were smartly dressed. They were all dirty but well dressed. At first glance, they didn’t seem to be simple people. My mother said that they had very delicate hands, which was not the case with simple Jews, because they all worked hard. […] They came and asked for something to eat. Back then, the times were not easy … I will never forget it [cries] … My mother only had barley soup … She poured it for them, they had their own bowls and spoons, they ate and then left. They went out on the country road and  reached the point where the fence ends. In the meantime, two German soldiers on bicycles arrived. They noticed the Jews right away, stopped, nodded at them, shouted something, and these Jews came over here. They talked for a while. They walked a bit and here, where this apple tree is, there used to be an escarpment. There was a large depression at its tip, maybe two meters or more. There used to be much deeper in the place of this depression. It was somewhere here, maybe even in the same place where we are standing now. A large lime tree grew here, but you could see everything. They ordered them to go down to that pit. There was a dyke here that was much higher then. These Jews entered the pit between the dyke and the top of the escarpment. We looked at it all through the window. The Jews were walking and the Germans took off their rifles. They had normal, infantry rifles. They took them off and my mother said that they would kill them. The Jews entered that hollow and I saw the smoke. I saw smoke rising from the barrels, and then two shots were fired. After a while the Germans went down and we heard two shots again. After [the Germans] left, we were able to go outside. I was little then, I was 9 or 10 years old. When I got there, I saw those killed. One must have had a shot through his spine because he was lying in an unnatural position. He was lying there, belly up, his belt was torn and I could see his flesh. Water, blood and barley soup were flowing out. The peasants dug a hole two meters from where the Jews were lying. It was shallow, because there was rock under the ground. I was at this burial. I’m not sure it is worth mentioning but they still looked at us after their death. Andrzej B. covered the face of one of them with his hat.” (Testimony of Bolesław R., Opoka, April 12, 2021)

The second witness, Henryk S., remembered the day as follows: “There was a tiny pond that had dried up in the summer. The bodies of these two Jews were lying on its shore, and a hole had been dug here. When they dug half a meter, the water appeared. Once they had dug a hole deep enough to bury the bodies, there was plenty of water. I remember as if today how they took those bodies by the hands and feet. Of course, there were no coffins, they just put the bodies in the grave. As they did so, the water splashed all the young rubbernecks around. When they covered the grave with soil, they stuck the cane of one of the Jews into it. Perhaps he was an old man. They stuck the stick where their heads had been. And that was the end of this. This tomb later collapsed. We grazed cows there, but grass never grew in the place of this grave. This cane stood there for a long time. It was still there when I grew up. But later, when road construction began, it all disappeared, covered with dirt.” (Henryk S., April 21, 2021)

After many years Henryk wrote the following poem entitled “Błonie”

On April 12, 2021, a site inspection was carried out in the place indicated as the approximate location of the mass grave of two victims (GPS: N 51 ° 24.674 ‘E 022 ° 04.566’). The grave is currently located on a private property, close to the southern border of the plot. The ground surface in this area is uneven and, according to the report, the area has been disturbed in the past.

The relief model (LiDAR) is not helpful in this case. 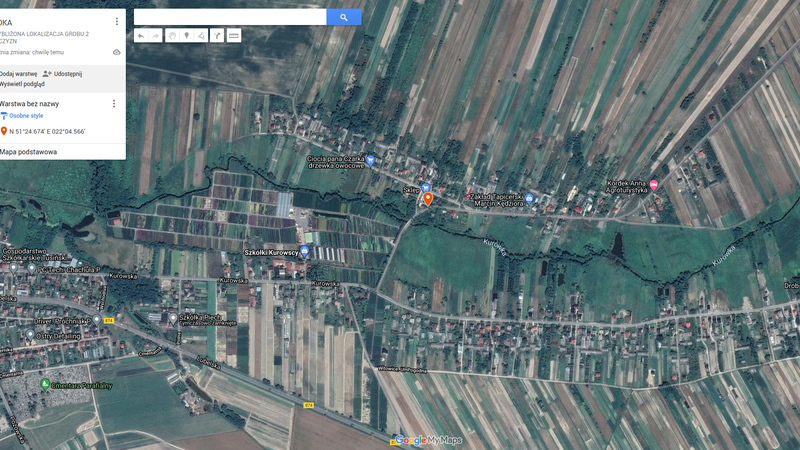 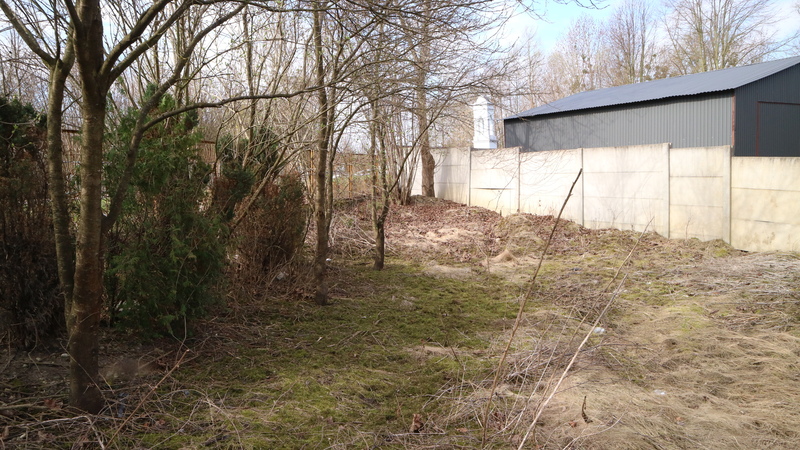 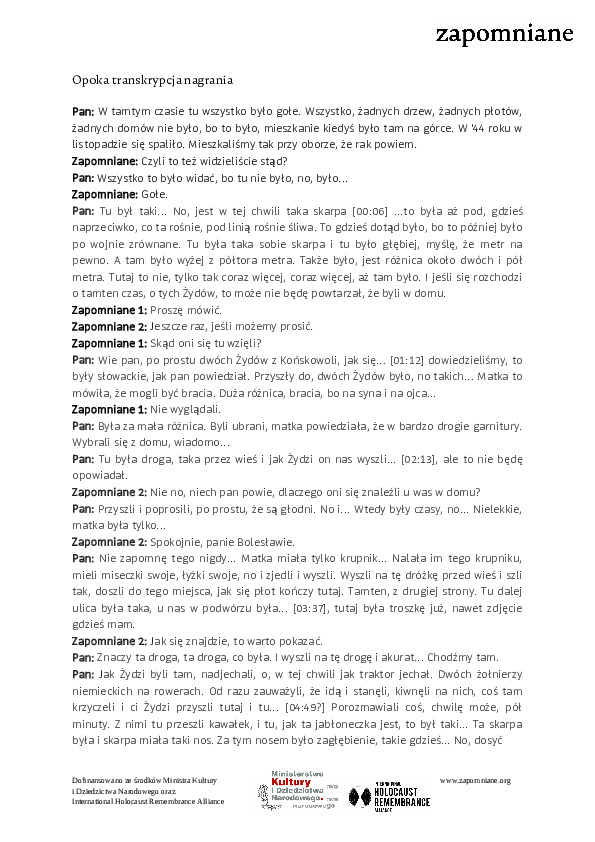 We are still looking for information on the identity of the victims and the location of Jewish graves in Opoka. If you know something more, write to us at the following address: fundacjazapomniane@gmail.com.