Several young men murdered in the autumn of 1943.

In the autumn of 1942 in Mrozy approx. 20 Jews of unknown identities were murdered. Before death they were used for drainage works. “Executions took place regularly on the field owned by the Fabiański family. Now it’s a forest between Sienkiewicza Street and Prusa Street.” In his account from April 2011 the witness, Zbigniew K. (born in 1929) presumed that up to 1000 people could have been killed then. This number seems to be inflated but the number of graves is echoed: “Three ditches were dug there and they were full. I know it because I saw blood seeping through the ground. I heard gunshots and screams of murdered people but I didn’t see it because my father wouldn’t let me out of the house.” (Mrozy, 11 April 2011.) According to Stanisław K., murders of Jews happened regularly in Mrozy: “[…] The Jews who used to work on farms doing drainage works were brought in from other places. The Jews had been working there for a while. Then they started bringing them here to death.” (An account from 31 May 1976.)

On 31 May 1976 Stanisław K. testified in front of the District Prosecutor in Warsaw: “[…] They brought Jews who used to do drainage works. The Jews had been working there for a while. Then they started bringing them here to death. Once I observed an execution on the field owned by the Fabiański family, by the forest. […] Ditches had already been prepared. […] After the execution, when the military policemen [from the police station in Mrozy] left, I came closer and saw the bodies of the murdered Jews. […] There were several dozens of them. I saw these Jews from a close distance when they were brought in carts and later when they led them towards the forest, past my windows. The Jews were miserable and weak. They were so hungry that some of them were too weak to get off the carts. They were dressed in rags and had no shoes. […] To this day in the forest you can see the places where their bodies were buried because the ground sank and hollows appeared. I went there yesterday and saw three hollows.”

On the same day another resident of Mrozy, Bronisława Z. (born in 1910) testified. She noticed two hollows in the forest where to this day the bodies of Jews killed in the autumn of 1942 have been lying:
“Later I saw the graves of murdered [people] many times. In those places the ground sank and hollows appeared. I measured them with steps yesterday. There are two hollows, each of them 25 steps long. It is near my house, […] on Jan F.’s field. Several years later the owner of the field planted a forest there. It grows there to this day.”

In May 2012 a site inspection was conducted in the place where, according to the then owner of the plot, the grave(s) was meant to be located. Representatives of the Masovian Voivodship and the Rabbinic Commission for Cemeteries as well as the mayor of the borough of Mrozy were present. The exact location and the number of the graves will be known once a non-invasive field research is conducted.

Thanks to the support of the Masovian Voivodship Office, in the autumn of 2018 the Town Hall of the Borough of Mrozy secured and commemorated the Jewish graves. The following words have been carved on the monument – in Polish and in Hebrew:
Here lie Jews of blessed memory murdered during the Holocaust.
In the autumn of 1942 approx. 200 people (men, women and children from the work camp in Kuflewo and the liquidated ghettos in Mrozy and Kałuszyn) were killed in mass executions.
In the autumn of 1943 several dozen young men were murdered.
May their souls find eternal life 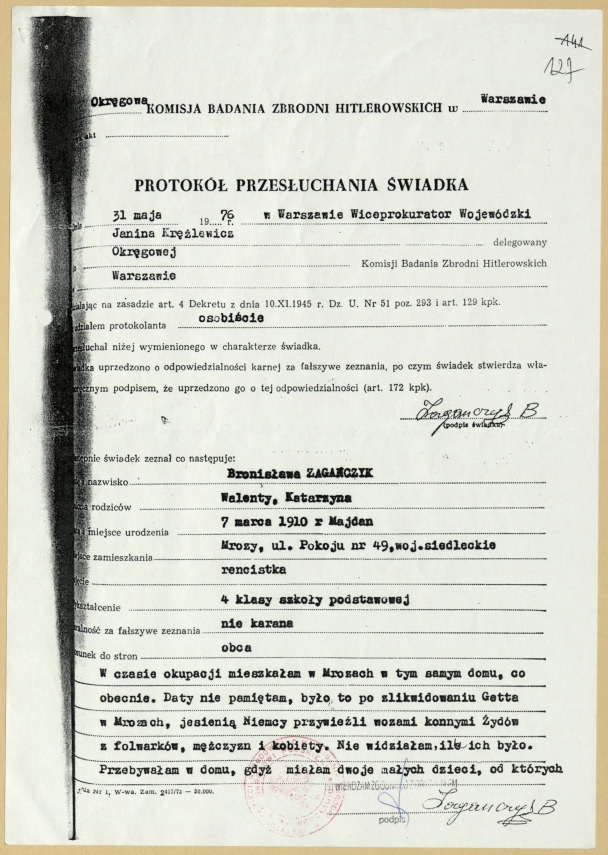 We are still looking for information on the identity of the victims and the location of Jewish graves in Mrozy. If you know something more, write to us at the following address: fundacjazapomniane@gmail.com.

Report of the hearing of witness Bronisława of 31 May 1976.

Report of the hearing of witness Stanisław of 31 May 1976.

A copy of the record of the account of Witness Zbigniew made on 11 April 2011 in Mrozy by The Lasting Memory Foundation.

Copy of the Decision to discontinue the investigation conducted by the Regional Commission for the Examination of Crimes against the Polish Nation in Wrocław of 21 June 2006 regarding German crimes – genocide and killings committed from 11 September 1939 to 1944, in the Mińsk district on the person of Kazimierz Jasiński and others, file no. S 14/05/Zn [including killings of Jews in Kałuszyn].