The forest – a place near the road that leads to the forest.

On 19 August 2015 representatives of the Rabbinic Commission and Fundacja Zapomniane conducted a site inspection in the village of Łopiennik Dolny. A grandson of Lucyna, a resident of Łopiennik born in 1925, informed us about the existence of a forgotten Jewish grave in this village. Near the then headquarters of the Forest Inspectorate there has been a dungeon or a bunker, built probably during the Great War. During the World War II a Jewish family from Łopiennik Górny lived there. Their hideout was discovered probably in the spring of 1943 and five Jews were murdered. The place of their burial remains unknown to this day.

This is the account of Lucyna: “There was the Forest Inspectorate – I worked there. And there was a German military staff in it. The Gestapo came and told the chief forester – they called him outside – that there was a bunker or something and that he, the chief forester, was hiding bandits in it. The chief forester replied that he didn’t know who was there. It was true that there was a dungeon near the road. When front was passing I slept in it with my parents. These Jews had been there for a while indeed. So who was supposed to go to the dungeon? They called a coachman who was there and the chief forester went first with a torch, followed by them [the Gestapo officers] with rifles. And they brought this Jewish family out. There was a 4-year-old child, my heart is breaking… and an 11-year-old boy. And they asked the oldest Jew: ‘How long you’ve been here?’ He replied that just one day and one night. I think they were called Berek. They were not from my village but from Górny Łopiennik. There were five of them – parents, two children and their brother. The boy was 11 years old, I remember it as if it was today. The mother held her 4-year-old child in her arms. It had to be spring. […] They were taken from the dungeon to the forest. [A German] had a rifle and a servant had to go in first because the German wouldn’t go into the dungeon. The servant went in first with a torch, he was shaking. One Jewish woman hid in a corner. There were three rooms [in the dungeon] and she went into a corner. A devil must have found her, the Jew was trying to escape and they took her…” (Łopiennik Dolny, 19 August 2015.)

Everything points out to the fact that the same event is described in the execution card from 1969 (from the archives of Lublin  Regional Commission for the Examination of German Crimes in Poland : “In the autumn of 1942 or in the spring of 1943 the Germans arrived in the village of Kolonia Łopiennik Dolny and in an underground dungeon within the current borders of the Forest Inspectorate they found Polish citizens of Jewish nationality, merchants of unknown names and unknown age, including one man, one woman and three children. They walked them out of the dungeon and shot on site. It happened in the afternoon.” (IPN Lu 501/31 p. 111, 111v)

Unfortunately, we were unable to establish an approximate location of the murdered family’s place of burial.

Lucyna recalled many names and surnames of Jewish families from Łopiennik Dolny: “There was the Tau family: Itka, Szandla and Majorek. Majorek was born in the same year as me – as children we decided we would get married. There were also Małka and Cywia. There were five of them and Cywia, the youngest one, spent a lot of time with my parents. They were children of Icek’s brother, I think he was called Aron. Icek already had adult children… two daughters… no, three! He had three children, his son was called Mosze and was a bit disabled. And they [Germans] took him even before they moved to the ghetto… they took him to chop wood. One day he didn’t come because he was ill and [a German] said: ‘Why didn’t you come to work?’ He said: ‘I was ill.’ The German replied: ‘Take your clothes off.’ The snow was up to the knees. And then: ‘Down! Up! Down! Up! Are you healthy now?’ Those motherfuckers were tormenting him! […] When they were ushering them to the ghetto [in Piaski] it was 2 am. Poor Icek Tau [the owner of a shop in Łopiennik] came to say goodbye. Hi wife was pregnant. When they were rushed [to the ghetto] [a German] kicked her because she fell over. Ah, I don’t want to talk about it anymore because I can’t stand how one man can do this to another.” (Łopiennik Dolny, 19 August 2015.)

The deportation of rhe Jewish families from Łopiennik was also mentioned in the arrest survey from 1969 kept in the archives of Lublin  Regional Commission for the Examination of German Crimes in Poland. Family names recalled by Lucyna were mentioned there. Their fate is unclear though. We have not been able to establish whether they arrived at the ghetto in Piaski or were killed in a mass murder in Gorzków. “In the early hours of 15 May 1942 the Germans arrived in the village of Łopiennik and arrested Polish citizens of Jewish nationality – merchants, i.e.: Majer Giltman with his wife (about 35 years old), Josek Rosencweig with his son, wife and two daughters, Szyja Tau with three sons, wife and daughter, age unknown; Icek Tau with two sons, wife and daughter (age unknown) and Aron Tau with two sons, wife and two daughters. Next, Germans took them to the village of Gorzków and probably killed them alongside other Jews.” (IPN Lu 501/31 p. 101, 101v)

In this context it is important to recall the testimony of Stanisław K. given on 1 February 1971. Throughout the occupation Mr K. was the mayor of the village of Łopiennik Dolny: “I remember that on 15 May 1942 the German military policemen arrived in our village in a lorry. There were about ten of them. I don’t know where they came from, [where] they stationed and I don’t know their names. As the mayor I was ordered to show them homes of all the Jews. I was accompanying the military policemen to Jewish houses. They gathered all [the Jews] at the mill in Łopiennik Dolny. At the mill men, women and children of Jewish nationality were gathered. I remember that at that time were present: Majer Giltman with his wife, son and two daughters; Szyja Tau with his wife, daughter and three sons; Icek Tau with his wife, two sons and daughter and Aron Tau with his wife, two daughters and two sons; and Mordka Lustman with his wife and one child. When all the Jews gathered at the mill the military policemen ushered them on foot to the road in Łopiennik Górny from where they were transported to Izbica and later to Grzków and Bełżec. All the Jews died but where and in what circumstances I don’t know. […] These Jews had lived in Łopiennik Dolny before the war and worked as merchants.” (IPN Lu 284/716, vol. 1, p. 6-7)

Lucyna remembers the last meeting with Majorek, her childhood friend: “I was in the ghetto in Piaski with my father, I thought I would find someone I knew. Unfortunately not. Once in winter it was snowing so much, my God. At 2 am someone knocked on the door. My mother and father were still alive then.
– Mr Kubacki, open the door, it’s me, Majorek.
– Major, how did you get here?  My father gave him tea.
– Thank you, Mr Kubacki, I just want to sleep.
– We’ll get a bed ready for you.
– No, take me to the barn, please. I won’t stay here. Mr Kubacki, wake me up at 6 am, please.
– Majorek, don’t go, maybe you’ll survive [here.]
– No, you’ll get killed and I’ll get killed. I don’t want to get you in trouble. Please, wake me up at 6 am.
My father woke him up and he left. It was such a snowstorm! How did this boy go? Where did he go? I don’t know. […] Poor people.” (Łopiennik Dolny, 19 August 2015.) 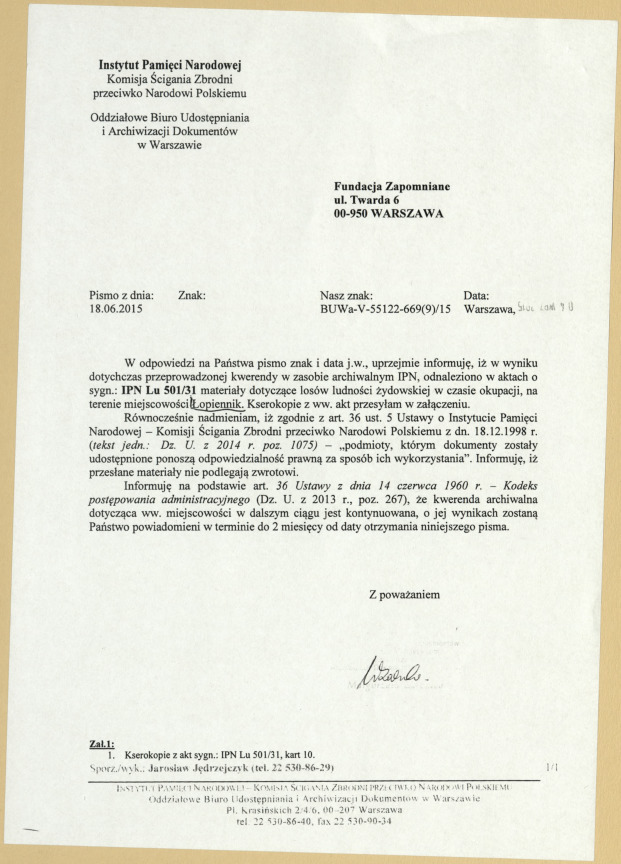 We are still looking for information on the identity of the victims and the location of Jewish graves in Łopiennik Górny. If you know something more, write to us at the following address: fundacjazapomniane@gmail.com.

IPN Lu 284/715, vol. 1, The shooting of two Jewish men from Łopiennik, Aron Josek and Aron Gierszon, in the autumn of 1942 in Stężyca, Krasnystaw district.

IPN Lu 284/716, vol. 1, Arrest on 15/05/1942 by German gendarmes of 15 inhabitants (of Jewish origin) in the village of Łopiennik Dolny, Krasnystaw province, and then murdering them in the Bełżec camp.

IPN Lu 330/149, regarding the village of Łopiennik, Criminal Case Files.