LIST OF VICTIMS
300 Jewish men, women and children from the ghetto in Łomża – murdered in 1943.

Two women and three children murdered in the autumn of 1942.

A forest in the vicinity of the village of Jeziorko was a killing site of residents of Łomża and the surrounding villages – both Christians and Jews. The first execution took place in September 1942 when the Gestapo in Łomża murdered several dozen residents of a social walfare home in Pieńki Borowe. The next execution took place in June 1943. Also in 1943 in the Jeziorkowski forest 300 Jews from the ghetto in Łomża were murdered – men, women and children (The Register of Crime Places and Facts…, p. 86.) The fact of Jews being murdered in the forest near Jeziorko has been confirmed by the local residents.

Stanisław P. (born in 1929) from the village of Poniaty: “First they killed [people from] the social walfare home. The man who looked after them had nothing more to feed them and went [to Germans] to ask for food. “Ja, gut!” They came at  night, took them away, brought them here and killed them. Later again those Jews… They [the Jews] were in the hospital, they [the Germans] came, took them and killed. Then they brought intellectuals from Łomża: doctors, barristers.” (16 August 2017.)

Irena B., a resident of Jeziorko: “They brought Jews. There is a lot of dead Jews there. No one saw them being killed but someone saw them being brought in. It was clandestine. [When] Germans were bringing them in, no one was allowed to come and see. Maybe someone saw [it] but they would run away so Germans wouldn’t see them and wouldn’t shoot them as well.” Irena remembered a group of people being brought in carts to the forest to death: “We were going through the forest, there was a road and once Germans were transporting [them]. There was a girl sitting [on a cart], she had plaited hair and red ribbons. Later on, my dad didn’t go this route again not to look at it. We could only hear gunshots, when they were shooting them…” (Jeziorko, 16 August 2017.) It is not clear whether there were Jews or Poles on the cart.

Bodies of the victims were buried in ditches which previously were a part of a Soviet army camp abandoned by the Red Army when the German-Soviet war started: “When Russians were here there was the whole staff in the Jeziorko manor. I didn’t know then but later I was in the army and found out. There were barracks but also in the forest, 2 or 3 km away from the barracks, there were emergency bunkers. In case of an alarm the army would take food in boxes and everything else and would go to the forest. And when Germans attacked, the bunkers were there. People tried to dismantle them. [Russians] built it so it would last even if a bomb hit it. They had a table and benches inside. And they [the bunkers] stayed there.” (Stanisław P., born in 1929, Poniaty, 16 August 2017.)

According to Stanisław, in the area of the military camp there were three mass graves of the victims of German executions: elders, political prisoners and Jews from the ghetto in Łomża.

It is confirmed also by the account of a resident of Jeziorko who was 8-9 years old during the war: “The monument [in the forest] is located in the middle of a large ditch… there was a large ditch there. Someone ordered to level this large ditch, I don’t know whether it was the mayor or the Germans. As a child, I remember covered vehicles coming from Łomża and people screaming inside. Older people were saying: ‘Oh, they are taking them, maybe to be shot.’ I remember those screams in cars but we would quickly run away to our parents.” (Jeziorka, 16 August 2017.) She also confirmed the existence of three adjacent mass graves. In one of them remains of the murdered Jews were meant to be lying: “When going from the road, the Poles are to the left, elders from the social walfare home are to the right (a small grave) and here are Jews. The smaller grave at the back is of the elders and the other one – Jewish. This one to the left was a large ditch. People from Nowe Jeziorko and those from Motyka [a village near Jeziorko] were saying that if you went to the forest, you could hear moaning. And that the ground was moving, that maybe some people were alive and they were suffocating. The Jewish ditch was smaller and the elders’ ditch was really small. It’s scary to think about it…” (Jeziorko, 16 August 2017.)

Another resident of Jeziorko (born in 1924) also talked about this: “Jews have a separate grave and Poles are on the other side.” (Jeziorko, 16 August 2017.)

The fact that one of the graves is Jewish is meant to be corroborated by a “lay” monument (rather than a cross) standing on top of this grave for many years. The current commemoration was created in 1960s.

In the Jeziorkowski forest there are currently three monuments raised on the graves of murdered residents of the social walfare home in Pieńki Borowe, political prisoners and intellectuals from Łomża. The location of the grave of 300 people from the ghetto in Łomża is unknown. The execution  and burial of 300 Jews from Łomża is not mentioned on any plaque.

A murder of a group of Jews in the Jeziorkowski forest was mentioned by witnesses who testified in front of the Chief Commission for the Examination of German Crimes in Poland in 1970s:

Jan S.: “After arriving in the Jeziorkowski forest we received an order from a military policeman to bury the bodies of people who had been shot. The bodies were located in a ditch. […] The ditch was about 5 metres long and about 3 metres wide and about 2.5 metres deep. As I later found out, the murdered people were elders from the village of Pieńki and Jews from the hospital in Łomża.”

Agnieszka M.: “At the time when Jews were in the ghetto in Łomża I saw a lorry driving through our village of Jeziorko towards Jedwabne and Łomża. There were Jews in pajamas and dressing gowns. From their appearance I recognised that they were Jews. Later on, I heard they were Jews from the hospital in Łomża.” (S92/04 Zk vol. II p. 230)

Władysław W.: “They also murdered about 40-50 elders from the social walfare home in Pieńki Borowe and also some old and sick Jews from Łomża.” (S92/04 Zk vol.I p. 10)

Much like in other places of mass murders, also in the Jeziorkowski forest destruction of evidence took place, i.e. burning of the remains of murdered people.

Wincenty D.: “Before leaving our area, Germans dug out the bodies of murdered people and burned them. Only remains survived. I saw uniformed Germans bringing wood and lime (or another chemical substance) to the Jeziorkowski forest and I saw remains of burned bodies in the place of execution after the uniformed Germans left. I can’t remember the month but it was autumn of 1944.” (S92/04 Zk vol. I p. 151)

The destruction of bodies of the victims of the executions in the Jeziorkowski forest was a part of Operation 1005.

The site of burial of the mothers and their children remains unknown to this day. 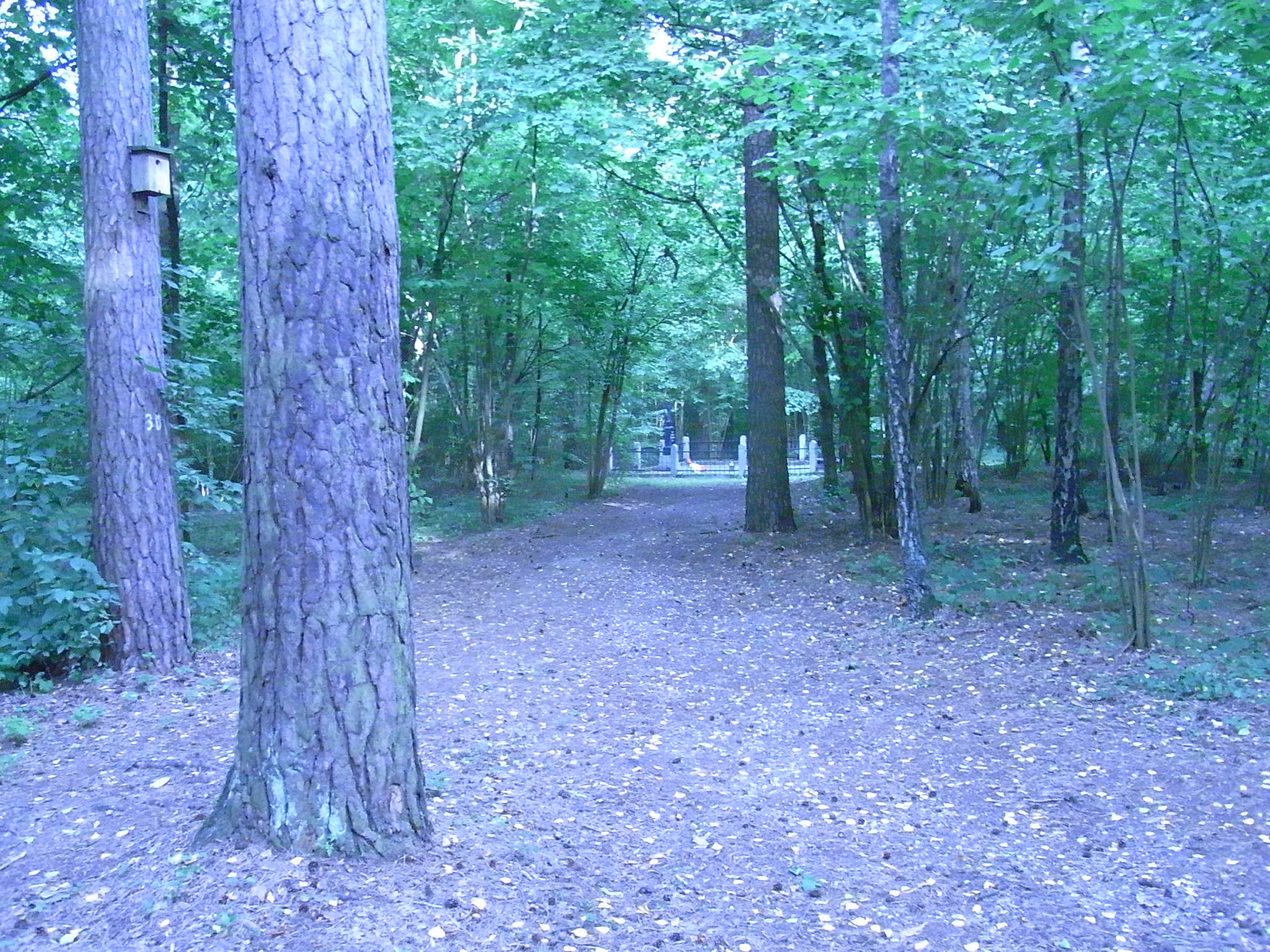 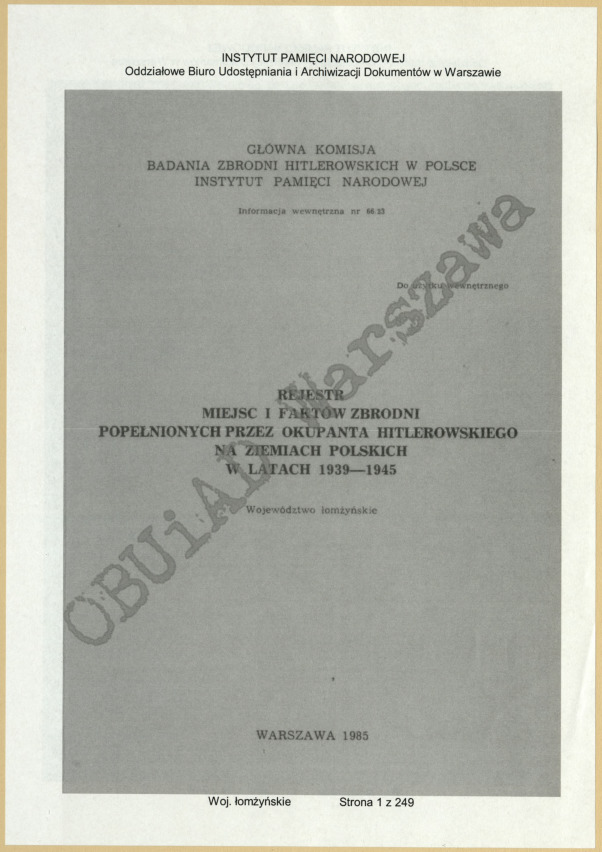 We are still looking for information on the identity of the victims and the location of Jewish graves in Las Jeziorkowski. If you know something more, write to us at the following address: fundacjazapomniane@gmail.com.