51.169566666667 21.853 NAVIGATE
LIST OF VICTIMS
Several dozens of Jews who probably escaped from the ghetto in Opole Lubelskie and was hiding in at least three different hideouts in the forests around Głodno. According to the eyewitnesses, there were about 10 people in one of them (women and men, including a woman with an adult daughter) and about 13 in the other one.

Forests around Niedźwiada Mała (at least two dug-outs, one of them known as Jurkowe Pole).

In the forests around Głodno and Niedźwiada at least several dozens of Jews were hiding. They probably escaped from the ghetto in Opole Lubelskie or they were trying to avoid moving to the ghetto.

One of the residents of Głodno (born in 1928) recounts these events: “[…] [The Jews] dug ditches in the forest and when the ghetto [in Opole Lubelskie] opened, they didn’t want to go to the ghetto but they hid in the forest, made hideouts and in the evening they were coming to the village to get milk. […] There were three hideouts. One of them was here, where Stolarski [lives], the other one near the forest ranger’s [hut] and the third one was called Jurkowe Pole. In one there were about 10, in the other about 13 [people.] I used to go picking mushrooms so I know where they used to be.” (Głodno, 17 February 2015.)

Stefan also remembers the day when the hiding Jews were murdered: „We saw Germans coming […]. They went there, the fuckers knew where [to go] because they hit all three hideouts. I had a friend in Niedźwiada Mała, he told me:

I see Germans on the yard, four of them. The landlord calls to me:

Fuck! I’m looking at the Germans, the fuckers are wearing helmets.

I see him holding a spade – neighbours and friends the same. I take a spade and we go to the first hideout. We dig a large ditch and we pick them up by their arms and legs…

They were all dead, women on one side and men on the other. They were lying on the ground and were shot in the back of their heads. Such were the times, my dear.” (Głodno, 17 February 2015.)

A son of a witness remembers the look of one of the dug-outs from his father’s recollections: “On the top of the dug-out there was juniper. The ditch was covered with juniper – you needed to take it off to get inside and then pull it back.” (Głodno, 17 February 2015.)

The authors of the article „The Ghetto in Opole Lubelskie” from 2011 wrote about the manhunt for the Jews hiding in the local forests: “Germans knew that many Jews were hiding and they sent agents to search for them. In the spring 1943 one of them pointed out a Jewish hide-out in the forest, Germans started a manhunt and murdered most of them.”

In the nearby Niedźwiada Mała we met Edward (born in 1940) who pointed out the location of one of the dug-outs [which was situated near a forest path]. This is what he said: “This is where they hid […]. Someone must have betrayed them, I think it was in autumn 1943 or 1944. There [in the ranger’s hut] were probably three of them. The ranger was called Stankiewicz. These three survived, they were from Opole Lubelskie. The ranger took them in to work, they did some jobs in the forest.” (Niedźwiada Mała, 17 February 2015.)

Edward’s neighbour, Władysław (born around 1935) remembered people who hid in the dug-out near the road: “They escaped, made the dug-outs and they managed to stay here for some time […]. In this one bunker near the road there were 9 or 10 people. Women and men, there was an elderly lady and a mother with an adult daughter. They weren’t here for long, someone spied on them, told someone else and they came and killed them. […] It was in the spring.” (Niedźwiada Mała, 17 February 2015.)

Władysław also told us a moving story of a woman with a child wandering around the neighbourhood: “There was a Jewish woman with a girl walking around, she was hiding on her own. The child died, she was looking for help, she stayed in a haystack but it was winter and the child died. She was 2 or 3 years old. One woman here wanted to take the child in but the Jewish woman didn’t want to give her up. I don’t know what happened to her later. Everyone was running away because they chased them [the Jews.]” (Niedźwiada Mała, 17 February 2015.)

The LIDAR survey reveals two depressions in this location, one of which is a forest hideout, the other probably a mass grave. 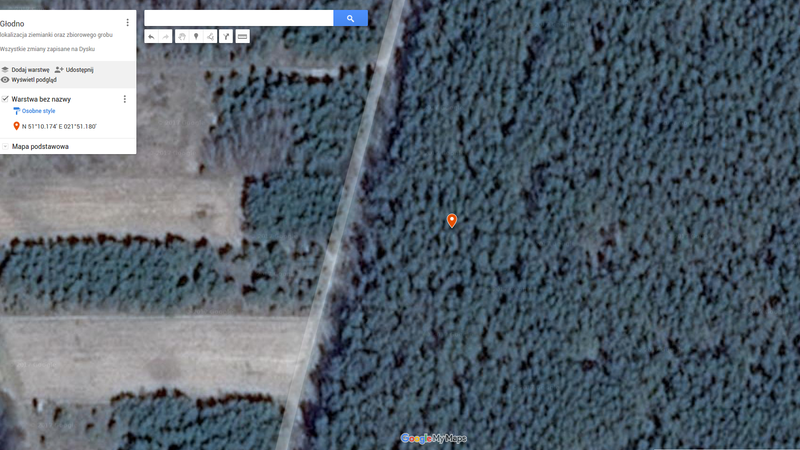 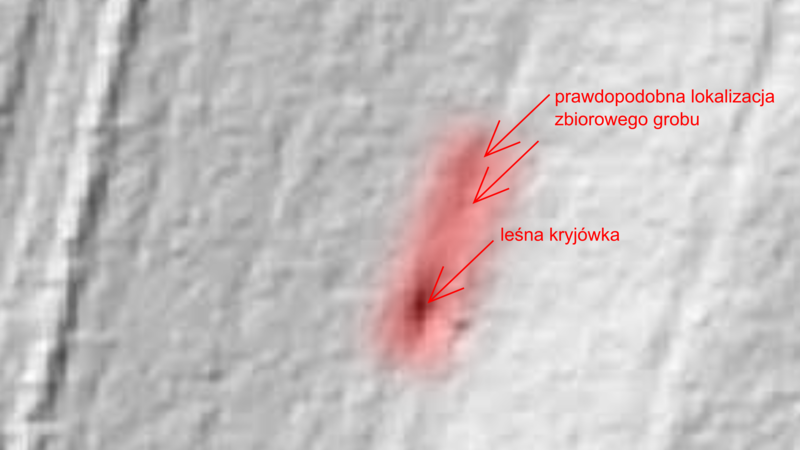 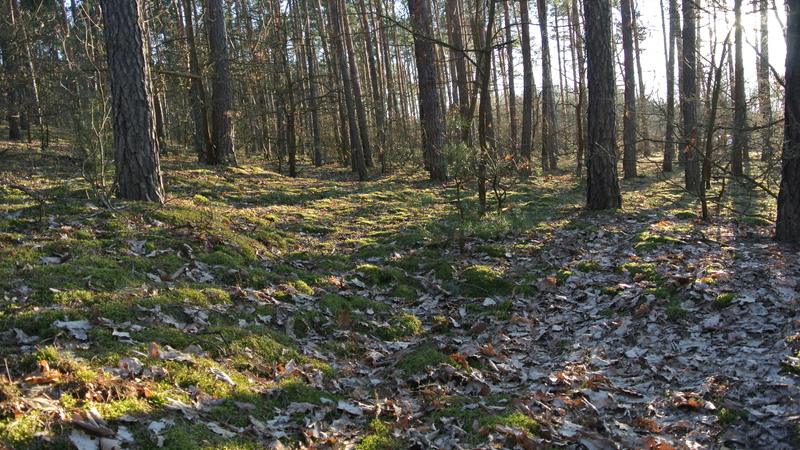 We are still looking for information on the identity of the victims and the location of Jewish graves in Głodno. If you know something more, write to us at the following address: fundacjazapomniane@gmail.com.

Recording of the Zapomniane Foundation (audio file), name: lack of data [son of Stefan, an eyewitness], b. [lack of data], subject and keywords: Jewish graves in Głodno, interviewed by Agnieszka Nieradko, Głodno, 17 February 2015.

Recording of the Zapomniane Foundation (audio file), name: Władysław [witness to the story], b. around 1935, subject and keywords: Jewish graves in Głodno, interviewed by Agnieszka Nieradko, Niedźwiada Mała, 17 February 2015.