The area of the former State Agricultural Farm and railway embankment.

On July 1, 2021, in Czesławice, we met Kazimierz G. who showed us three unmarked Jewish graves. Two of them are single graves of Jewish women, whose dead bodies were thrown from the carriages going to the concentration camp in Majdanek. The bodies were buried by the local people near the railway line from Warsaw to Lublin, between the stations of Nałęczów and Sadurki.

“It was the summer of ’43. Most of the transports were going to Majdanek. The transports would go along these tracks here. It was crowded and there was no air in the carriages. Weaker people simply died on the way. Their bodies were thrown out through the windows. These were cattle wagons with small windows at the top. One Jewish woman was thrown out here by people who were still in that wagon. Another woman was thrown about 300-400 meters further. Both women fell just off the tracks. Local residents decided to bury them.

It was obvious that they were already dead. My grandmother lived across the street and was there when it happened. The body was thrown on a path that ran across the railroad tracks and led to my grandmother’s neighbors. And it fell just on this path. That’s where they wanted to bury her. What else could they do? My grandma asked them to do it a little further from this path so that she wouldn’t have to walk on her grave. They buried her about 30 meters away. I know where it is. And the second woman was buried a little further. One woman was young, the other was older, as far as I know. My father remembered that. Nobody knows about this place except me. My father told me about it. The second Jewish woman is buried right next to the railway crossing. There used to be a well there, which made it easy to find this place. Before the war, there was a railway watchman who opened and closed the barriers to prevent accidents. Today his work is done by signal lights. He had a small building in which he lived and a well from which he could get the water. The building was demolished during the construction of the second track line. The well still stood there unused. This Jewish woman was buried right next to this well, maybe one and a half meters away. My father showed me this place.” (July 1st 2021, Czesławice)

Later we drove to Czesławice where on the area of the former State Agricultural Farm and the present experimental station of the Institute of Soil Science and Plant Cultivation of Puławy, Kazimierz indicated the approximate location of the burial place of a dozen or so Jews murdered in 1943.

“The third place is the [grave] of the Jews who worked for the Germans. They were tailors and shoemakers who worked in the palace in Czesławice [the so-called Czesławice manor, its last administrator was Tomasz Milowicz, after the war it was nationalized by Bierut’s decree]. It was in ’43 when there was an order to liquidate everyone – even those who worked for the Germans. Just because they were Jews, they had to… Even though they were doing some kind of work for the German Reich. There is a building here that was here before the war. Calves were kept in it. They were calling it calves shed. The Jews were shot behind this building and buried nearby. There used to be a barn there. I remember it was still there when I was in primary school. Once there was a custom that all unneeded waste was buried behind the barn. If a pig, a cow or a dog died, the Poles would bury it behind the barn. To humiliate the Jews even more, the Germans decided that the Jewish bodies too should be buried there. A lot has changed in this place since that time. The cowshed is now standing there. The area is leveled and covered with earth. […] They were Jews from the vicinity, brought here to work for the Reich. As far as I know, they sewed clothes and shoes. My grandmother said that a Jew named Lejba used to come to them. Everyone called him Lejbusz. He sewed shoes, often from whatever material that he had at hand. It was not easy to get shoes during the war. Sometimes he would come to them to get something to eat. He cleaned the pot to make sure that there was no pork fat in it. He would always scrub the pot himself to cook something for himself. I know this from my grandma’s stories.

–       Did people know that those Jews were shot in that place?

–       Yes, the old people knew. The Jews did not dig their own graves. The rest of the workers dug it for them. The Jews weren’t digging. There were women there, one was only seventeen. The grave was prepared first and then they came and took them all…” (1 July 2021, Czesławice)

The questionnaire on mass executions and mass graves of September 24th 1945 records the murder of 11 people in the manor in Czesławice:

The German military policemen from Puławy shot 11 Jews on 28 December 1943:

Cyrulik from Białystok, around 30 years old,

Chawa, a seamstress from Markuszów, about 25 years old,

Grajrzewski, a coachman from across the Bug river, about 28 years old,

Lipczyk, a carpenter, about 28 years old, probably from Pińsk,

London, no specific profession, about 28 years old, from across the Bug river,

Wierszubski, a tailor from Białystok, around 30 years old.

The names of 4 people are unknown. Apparently there was a man around 30 years old who was a tailor from Markuszów and a girl around 18 years old, who was the daughter of the tailor named Berek from Nałęczów, as well as Chawa’s sister and mother. The victims were buried in the manor, next to the brick barn after removing their clothes and jewelry. As at the date of the questionnaire, the place of the grave was invisible due to the plowing of the field. The size of the grave, according to the declaration of the inhabitants of the manor, is 3×2 meters. (IPN Gk 163/16)

On October 19, 2022, tests were carried out using the MALA X3M georadar (500 Mhz) in the place indicated by the witness. An attempt was made to locate a single grave of a woman buried near the currently non-existent building of the lineman. The information provided by the witness shows that there was a well near the lineman’s building where the victim’s body was placed. 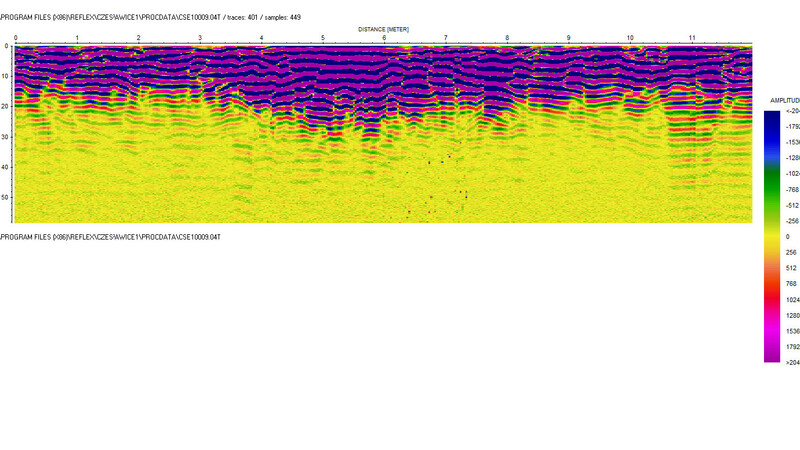 We are still looking for information on the identity of the victims and the location of Jewish graves in Czesławice. If you know something more, write to us at the following address: fundacjazapomniane@gmail.com.

The Register of Killing Sites and Crimes committed by the Germans in Poland between 1939 and 1945, lubelskie voivodeship, Warsaw 1985.