In June 2021, we visited a Jewish war grave in Zwiernik, where the remains of a five-person Jewish family from Pilzno, murdered in the fall of 1943, were buried. Thanks to an archival query, we have found the files in a criminal case against two inhabitants of Zwiernik, suspected of handing over the Klotz family from Pilzno to the police. (IPN Rz 353/183)

We can read from the indictment that “during the occupation, in the village of Zwiernik in Dębicki district, the Jewish family of Klotz, consisting of three adults and two children, was hiding in Władysław P.’s forest. They were hiding in the forest, where they had a dugout in the bank, and local farmers brought them food.” (pp.55-56)

In connection with the investigation conducted in 1949, many witnesses were questioned. From the interrogation reports, we can learn a bit more about the murdered:

Tomasz G.: “[…] I knew this family before 1939. They lived in Pilzno and ran a board store. I brought them food when they were hiding. The bodies of the aforementioned Jewish family were buried at the place of their execution by Andrzej D. and they are still there to this day.” (pp. 4-5)

Bartłomiej P.: “[Policemen] went to Władysław P.’s forest and soon I heard shots and screams coming from there. […] Then D. came, we took shovels and went to bury 5 Jews who had been shot. It was the whole family, i.e. husband and wife, one daughter and two sons.” (pp. 12-13)

Władysław P., the owner of the forest where the Jewish family was hiding: “[…] I also know that they shot 5 people of Jewish origin, i.e. Hirsch Klotz’s family from Pilzno.” (pp. 8-9)

In the case files there is also a report of the inspection of the place where 5 people of Jewish origin were murdered on December 17, 1949: “In Zwiernik, in the “Budyń” hamlet, in Władysław P.’s forest, there is a grave in which the bodies of 5 people of Jewish nationality are buried. It’s located right on the edge of the forest, which is the property of the above-mentioned citizen. The grave is 2 meters long and 1 meter wide. The surface is 20 centimeters sunken, and on both sides there are hills up to 6 meters high, covered with mixed forest. They extend northwards, creating a gorge in the middle. 32 meters from the grave, deep into the forest, there was a hideout in which 5 Jewish people were hiding. Flasks and 2 kitchen pots were found on the site.” (pp. 23-24)

Inhabitants of Zwiernik still remember the tragic events of the fall of 1943:

“”When they were about to bury the bodies, my sister ran there to peek, she was curious, as children tend to. There were five people, Jews from Pilzno, two sons and a girl, probably 15 years old.

A descendant of the family who hid the Koltzs in the attic before they moved to the forest hideout:

“[…] On that day, they [the blue police] came in in the morning, it was about nine or ten when they were killed. When we were grazing the cows, our mother gave us a little borscht and bread, and we brought it to those people. There was a whole family of five there. Two boys, a daughter and the parents. One’s name was Srul, the other’s – Sijek, and the daughter’s name was Cyla. She was sick, her mother said that she had some English disease [probably it was rickets.] They lived with us in the attic. This building was not here, but a stable and a playing field. […] When my father received a message from the police in Pilzno, he took the ladder as quickly as possible and said to them: They will come here and shoot you. They followed that road and hid in that forest.” (Zwiernik, June 21, 2021)

The LiDAR survey is not helpful in this case. 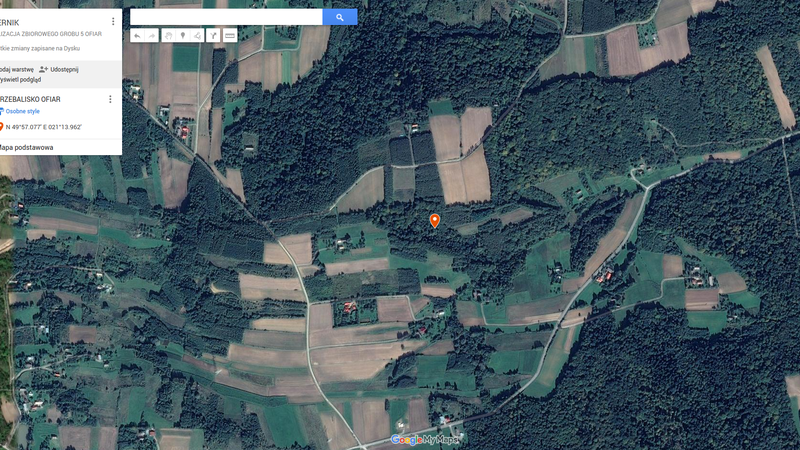 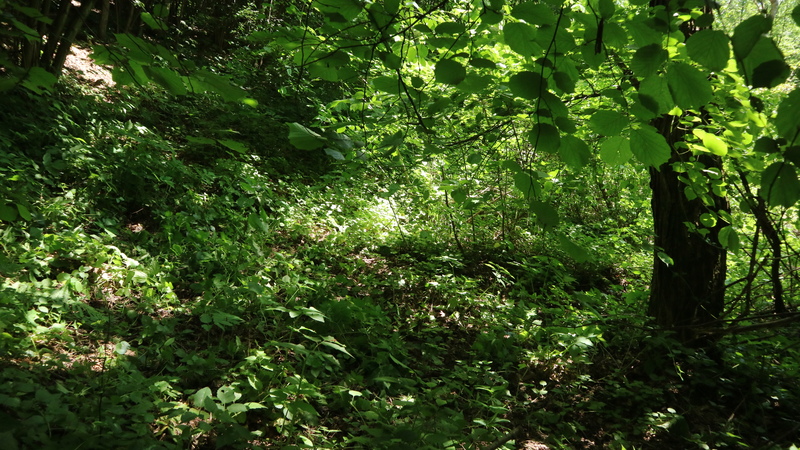 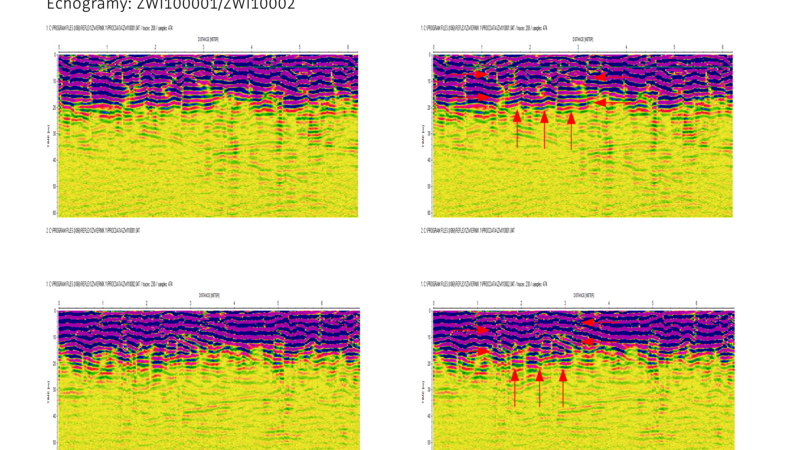 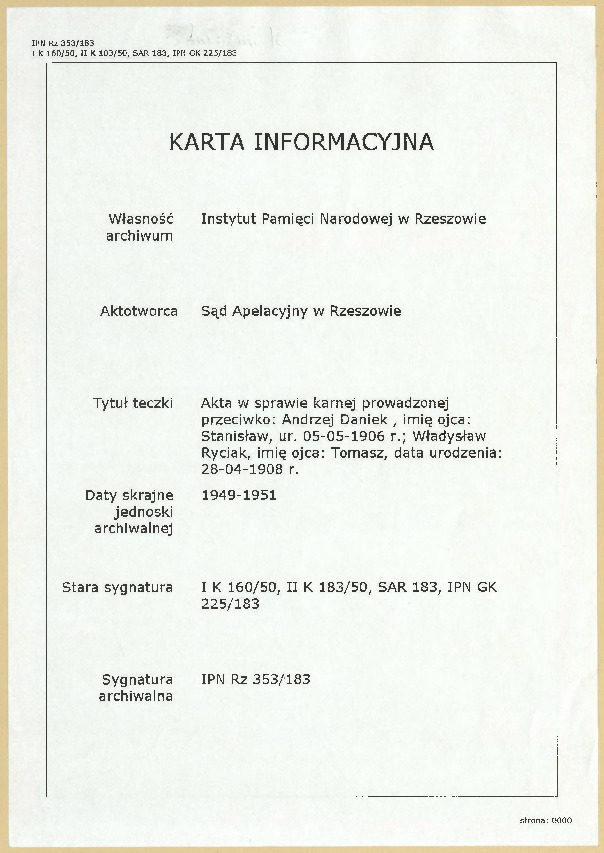 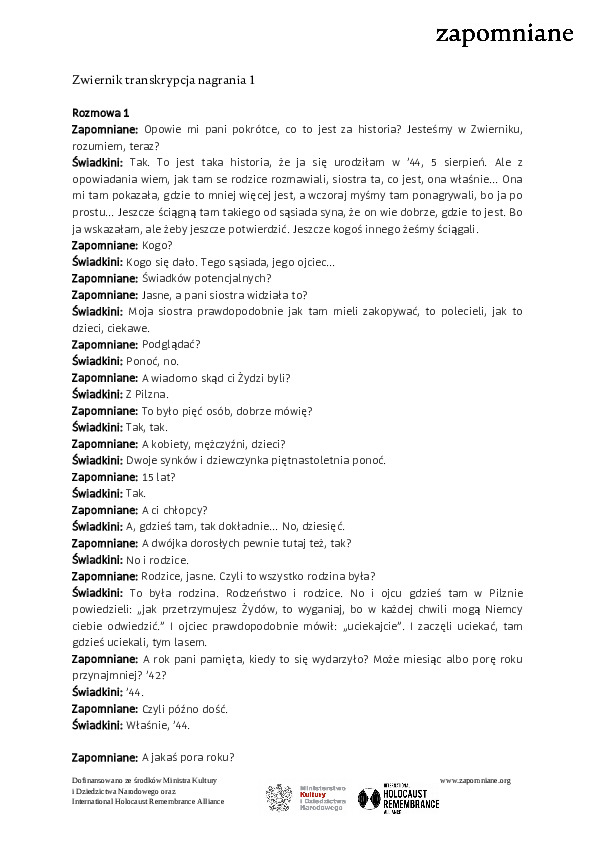 We are still looking for information on the identity of the victims and the location of Jewish graves in Zwiernik. If you know something more, write to us at the following address: fundacjazapomniane@gmail.com.

The Register of Killing Sites and Crimes committed by the Germans in Poland between 1939 and 1945, Warsaw 1984