In a privately owned farmland, there is a grave of a young woman. Here are the circumstances of discovering her remains and burying the body, collected by a person, who reported the existence of this grave to the Foundation. In the unspecified year of the last war, two brothers rode a horse-drawn cart to buy goods to fill the assortment in their store. During the drive through the wolickie fields, the horse got scared, reared up and up and, despite being hit with a whip, did not want to continue. In doing so, it partially broke the drawbar. The brothers found the body of a young woman, about 19 years old, who had been hit on the head with an axe. It was a Jewish woman who was previously hiding in one of the houses in Wolica. They didn’t know what to do, so they put the body on the bank (the road was running in a slight depression). There was another cart behind them, someone informed the mayor of Wolice, the brothers repaired the drawbar partially and went on to get the goods. When they were returning with the goods, a large group of people gathered at the place where the body was found, and the digging of the grave started. The mayor appointed about six young people to dig. [..] The body of a murdered woman was placed directly in the pit, without covering her face with anything.

The name of the murdered person is still unknown. The owners of the field where she was buried cultivate the memory of her by lighting candles and putting flowers on her grave. During the site inspection of the grave in August 2020, we met the son of the man that was burying the body of a murdered woman: “We still call this field “A Jewish Girl’s Field” [na Żydówkę], the people laughed at us more than once: “they leave candles and flowers there”. That’s right, my father said that he just used to see her, he didn’t know her, he’s just seen her. He was burying her. […] Dad told us that it was a very beautiful girl, with braids, a very beautiful, young girl, as he told me about 18, 19 years old.”
Our interlocutors helped us also to determine the approximate location of the grave. On that day, we placed a wooden matzevah in the place indicated by them.

The place of the grave was marked with a wooden matzevah in 2020 as part of the project “Reference points – marking 24 Jewish war graves with wooden matzevot ” . The project is an attempt to find a way to mark these places before they can be commemorated. The action was aimed as an intervention in the landscape of these places, which would remind about what remains invisible, even if present in the memory of local communities.Being only a temporary commemoration, wooden matzevot invite local communities to discuss and take action, to discover the places, and perhaps to start their own memory practice related to them or to permanently commemorate them.
You can read more about the project here (English below):
https://zapomniane.org/wp-content/uploads/2018/10/MACEWY_punkty-odniesienia_folder.pdf

On August 13, 2020 a site inspection was carried out to determine the location of the grave of a single victim. The area indicated by the witnesses is located among arable fields (GPS: N 50°01.459′ E022°25.312′). According to the accounts of witnesses, the grave is located on the arable field, right next to the road and probably close to the axis of the lynchet.

The LiDAR survey was not helpful in this case due to the small size of the grave and the continuous cultivation of the soil. The reference points in this area change over time, which does not allow for a precise indication of the burial place. 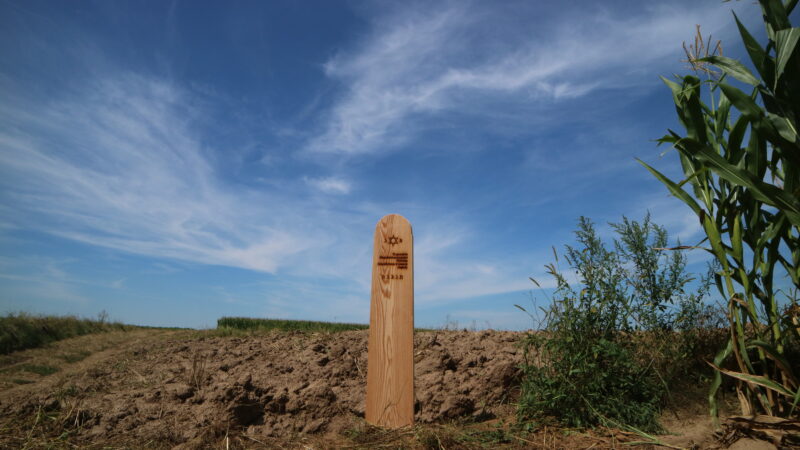 We are still looking for information on the identity of the victims and the location of Jewish graves in Wolica/Gać. If you know something more, write to us at the following address: fundacjazapomniane@gmail.com.

IPN Rz 552/1 – concerns war graves in the town of Gać in the district Przeworsk.