A 43-year-old Jewish woman named Kloc and a Jewish man of an unknown name.

Murdered on 20 November 1942 by the Nazis as a result of his attempt to escape from a transport from Wodzisław to Sandomierz:

The Jewish cemetery in Wodzisław (mass graves are meant to be located in the so-called new part of the cemetery on the west side.)

In the mass and individual graves on the Jewish cemetery in Wodzisław the victims of the following murders are buried:

In the spring 1942 a Gestapo officer murdered a 43-year-old Jewish woman called Kloc “caught while attempting to purchase groceries.” On the same day the same officer shot to death a Jewish man of an unknown name. An eyewitness described the event: “Kap [a police officer named Kap] on the way back from Piotrkowice to Wodzisław saw a cart transporting bags on the road from Piotrkowice. While checking the papers of the man who sat on the cart, he recognised he was a Jew. To make sure he ordered him to undress and show his penis and then he shot him in the back of his head. The body was buried on the Jewish cemetery in Wodzisław” (IPN Ki 53/4477, p. 5).

On 15 June 1942 the SS officers murdered approx. 50 people on the cemetery. Among the people killed on that day were: Bornsztajn Hynsie born in 1882, Hewkowicz Mojsie born in 1902, Nowarski Mojsie born in 1907, Nowarski (first name unknown) born in 1882, Rajdman (a woman, first name unknown) born in 1892. Their bodies were buried on the Jewish cemetery in Wodzisław. In 1968 an eyewitness, Roman S., testified: “I was an accidental eyewitness to an execution of Jews in the town of Wodzisław, Jędrzejów District, Kieleckie Voivodship. I noticed two blue policemen leading around 50 people accompanied by four German SS officers. They took them to the Jewish cemetery ‘Kurkut’ where ditches had already been dug. They stood [these people] in front of the ditches with their backs to the SS officers who said something to them – and then we heard rifle shots. I watched the execution from behind the wall. While led to the place of execution, one of the Jews hid behind a tombstone. After the execution ended one of the SS officers noticed the hiding man, ran to him and pierced him with his bayonet. After the execution I saw them finishing off everyone who showed signs of life with gunshots. Then they left the corpses – other people were meant to bury them.” (IPN Ki 53/4477, p. 7)

In the autumn of the same year during the deporation of Jews to Sandomierz Icek Berek Chamejda was shot to death for attempting to escape. [He was] “born on 20 December 1877 in Wodzisław of which he was also a resident, a citizen of Poland, of Jewish nationality; he was shot by the Nazis on 20 November 1942 for attempting to escape from a transport of Jews from Wodzisław do Sandomierz” (IPN Ki 53/4477, p. 11). There is no information where his body has been buried.

A year later in September and October the mass executions on the Jewish cemetery in Wodzisław and on the meadows called Wierdonki took place during which approx. 318 people were killed. Some of the bodies were buried on the cemetery and some in Świątniki. Witnesses remembered several dozens of carts gathered on the German order and used to transport the bodies of the murdered Jews to the cemetery. The mass graves are meant to be located in the so-called new part of the cemetery on the west side.

On the 12th of September 2015  four potential locations of mass graves at the Jewish cemetery were marked. Three of them are located inside a contemporary fence (GPS: 1. N50°30.836′ E020°11.720′, 2. N50°30.836′ E020°11.731′, 3. N50°30.836′ E 020°11.738′). One is located outside the fence, in the eastern part of the cemetery. This place is located within the historical boundaries of the cemetery (GPS: N50°30.840′ E020°11.809′) and was precisely indicated when the complex GPR surveys were carried out on behalf of the General Directorate of National Roads and Highways (GDDKiA). An attempt was also made to accurately locate the mass graves in the part of the fenced cemetery using a GPR. The results for these locations where of a very low quality, which prevents reliable interpretation of data. The site location took place without the presence of a witness.

Precise LIDAR survey for this location has been obtained. The interpretation confirms numerous ground disturbances, including the places indicated above.

An aerial photography query was conducted, resulting in the acquisition of a photograph dated for19th of January 1945. The interpretation of aerial photography confirms the numerous ground disturbances within the three cemetery plots and along the fence in the south. 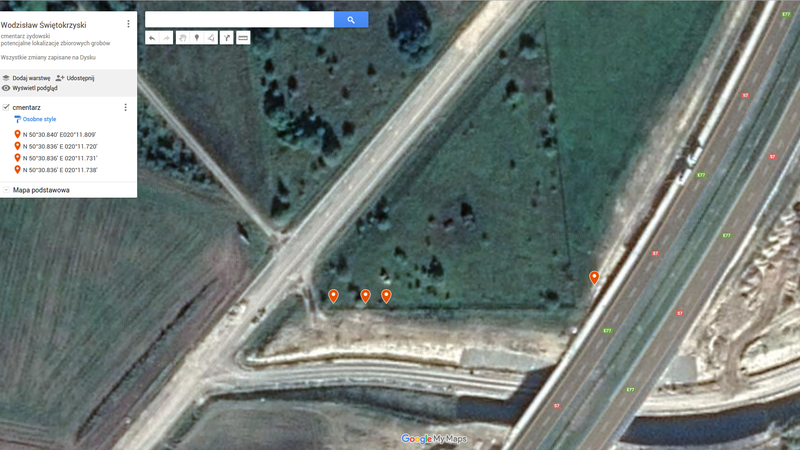 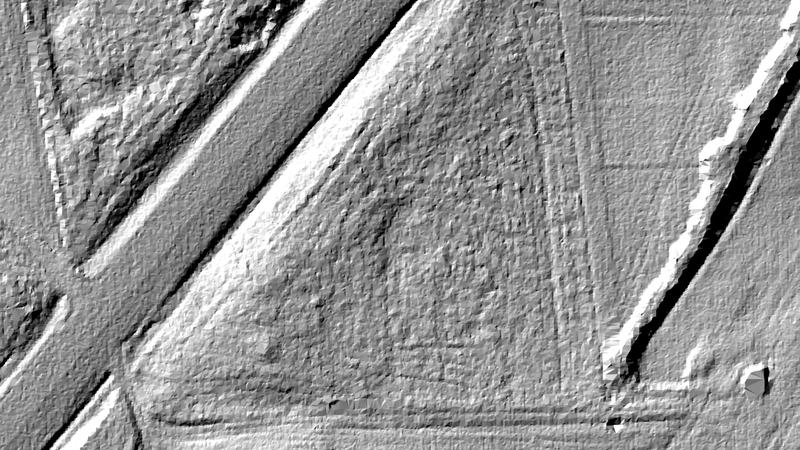 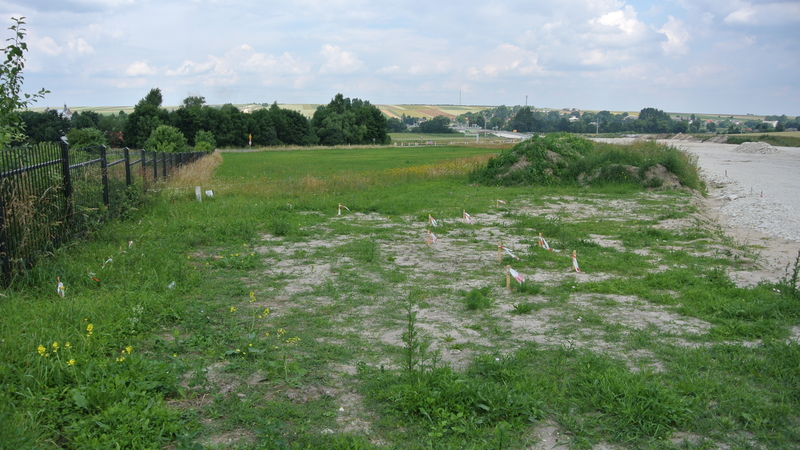 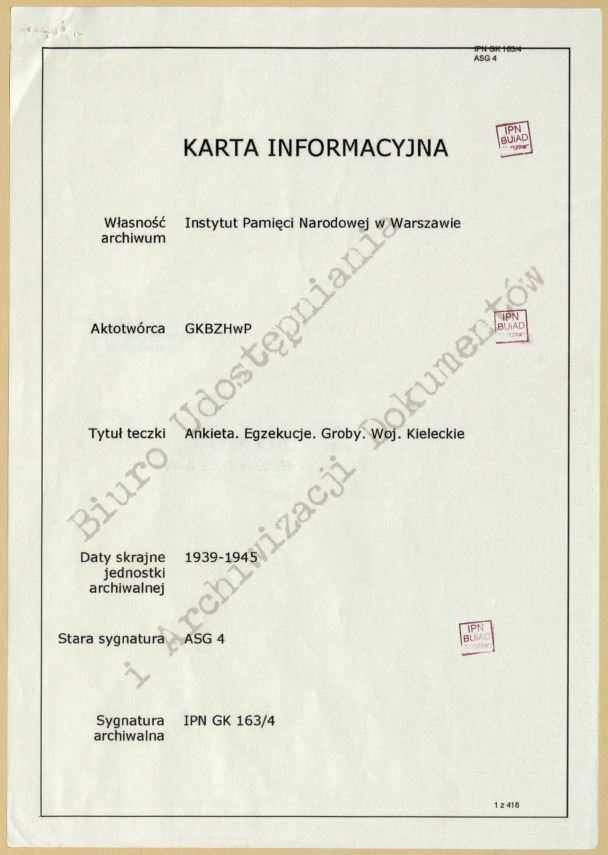 We are still looking for information on the identity of the victims and the location of Jewish graves in Wodzisław. If you know something more, write to us at the following address: fundacjazapomniane@gmail.com.

IPN Ki 53/4477, Questionnaires regarding places and facts of German crimes committed in 1939-1945 in the area of Jędrzejów district.

IPN GK 179/51, Materials of the Regional Commission for the Examination of German Crimes in Radom regarding people from the Jędrzejów district, murdered or deported to camps during the German occupation, lists of the names of the people deported.

Card from the thematic file of the Chief Commission for the Examination of German Crimes in Poland.