Before the liquidation of the ghetto in Ulanów in the autumn of 1942, at least two executions took place in the town:

A comprehensive description of the extermination of the Ulanów Jewish population can be found in the Questionnaire of The Chief Commission for the Examination of German Crimes in Poland and The Regional Commission for the Examination of German Crimes in Warsaw: „From the autumn of 1939, Jews from nearby towns were resettled to Ulanów, in 1940 about 300 Jewish people from Czechoslovakia were brought to the won. In total, about 4,000 Jewish people, men, women and children, were gathered in Ulanów. On October 2, 1940, all the Jews remaining in the town were moved to the ghetto in Zaklików, about 30 km from Ulanów. Younger Jews were ordered to go on foot whereas older ones were transported in carts.
In the period from 1939 until the expulsion there were occasional cases of shooting Jews, mostly by drunk Gestapo, SS or Wehrmacht soldiers. Larger mass executions took place after the expulsion. The displaced Jews returned individually or in groups to Ulanów to take the valuable items left there. These Jews were caught by the uniformed Germans and shot them at the local Jewish cemetery. There were also cases of shootings in houses to which Jews were returning. In addition, Gestapo and SS officers searched the surrounding forest and caught the Jews who were hiding there. They were also taken to Ulanów and shot at the local Jewish cemetery. Such executions, which had already started at the end of 1942, lasted almost a whole year and, according to the information provided by the now living residents of Ulanów [the document is dated November 25, 1968], in particular the former mayor Franciszek Nahajski, about 1,500 Jewish people were shot in these circumstances during the period mentioned above. They were only Jews from Poland. (IPN BU 2448/882)
According to the same survey, 870 of the 1,500 people murdered after 1943 were children.

The place of the grave was marked with a wooden matzevah in 2020 as part of the project  “Reference points  – marking 24 Jewish war graves with wooden matzevot ”. The project is an attempt to find a way of marking these places before they can be commemorated. Marking forgotten Jewish war graves with wooden matzevot is a subtle  intervention in the landscape reminding about what remains invisible, yet present in the memory of local communities. Being only a temporary commemoration, wooden matzevot invite local communities to discuss and take action, to discover the places, and perhaps to start their own memory practice related to them or to initiate a permanent commemoration.

On July 31, 2018, April 4, 2019 and June 2, 2020, site inspections were carried out at the Jewish cemetery at Tadeusz Bula street in order to determine the potential locations of mass graves. The area to be researched was selected based on a photograph taken by Stefan Kiełsznia (the album „Photographs” by S. Kiełsznia – published by the Brama Grodzka Center, NN Theater) taken at the Jewish cemetery in 1943. Judging by the tombstones in the photograph and the position of the sun, the photo was probably taken from the side east towards north – west. In the foreground there are clearly visible traces of a recently buried mass grave (marked in the photograph with yellow and red arrows). The characteristic hill in the background is located in the central part of the cemetery.

As a result of an aerial photography query, a photo with the reference number: GX12185 frame 39 was obtained. The photo shows the cemetery overgrown in a large part, which makes the interpretation difficult. After the photograph was filtered, an attempt was made to trace soil disturbances that could potentially be related to mass burials (marked in red in the photograph).

The relief image (LiDAR) shows a large depression in the northern part of the cemetery, close to the current entrance and also relatively close to the historic entrance, which was on the west side. Moreover, numerous disturbances are visible in the entire area of the cemetery (the extensive depression in the northern part and locations potentially correlating with S. Kiełsznia’s photography are marked in red). In total, four locations were selected and submitted to GPR research.

Location 2 – GPR research in this location is inconclusive. The geophysical interpretation is not helpful in this case.

Location 4 – on three echograms named: ULA50001, ULA50002, ULA50003, anomalies were recorded in the following format: length approx. 28.2 m, width: not recognized, depth approx. 0.60 m – 1.50 m below ground level.
In this area, the ground disturbances are massive and require additional research. The depth of the anomaly is variable, which may indicate the existence of many graves.

Further research is planned for 2021. 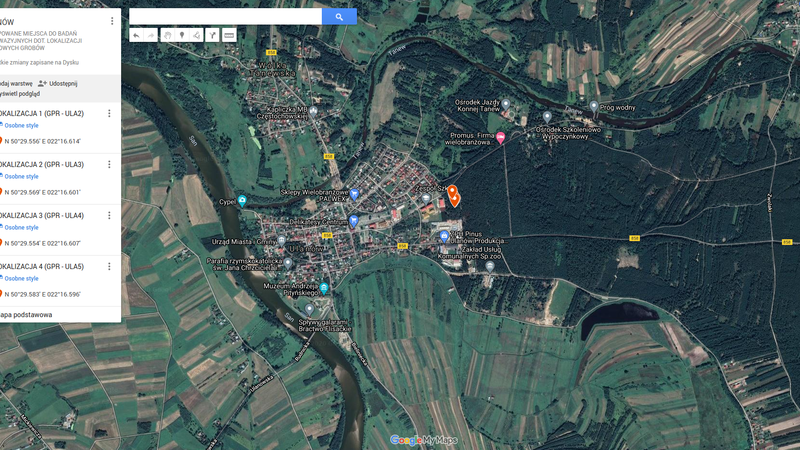 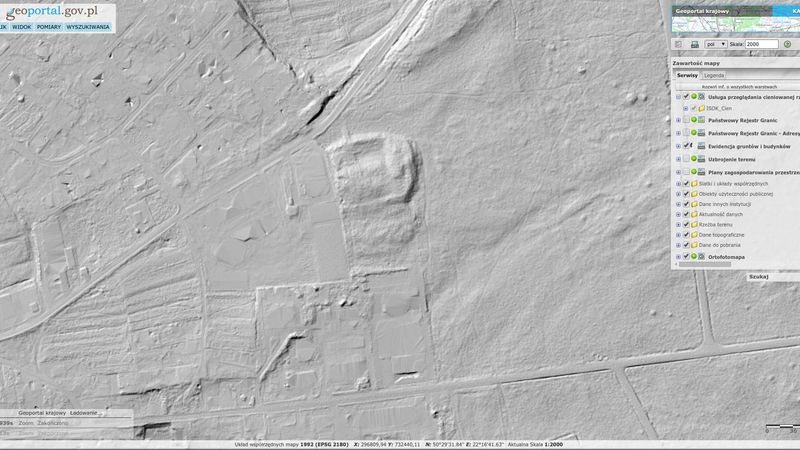 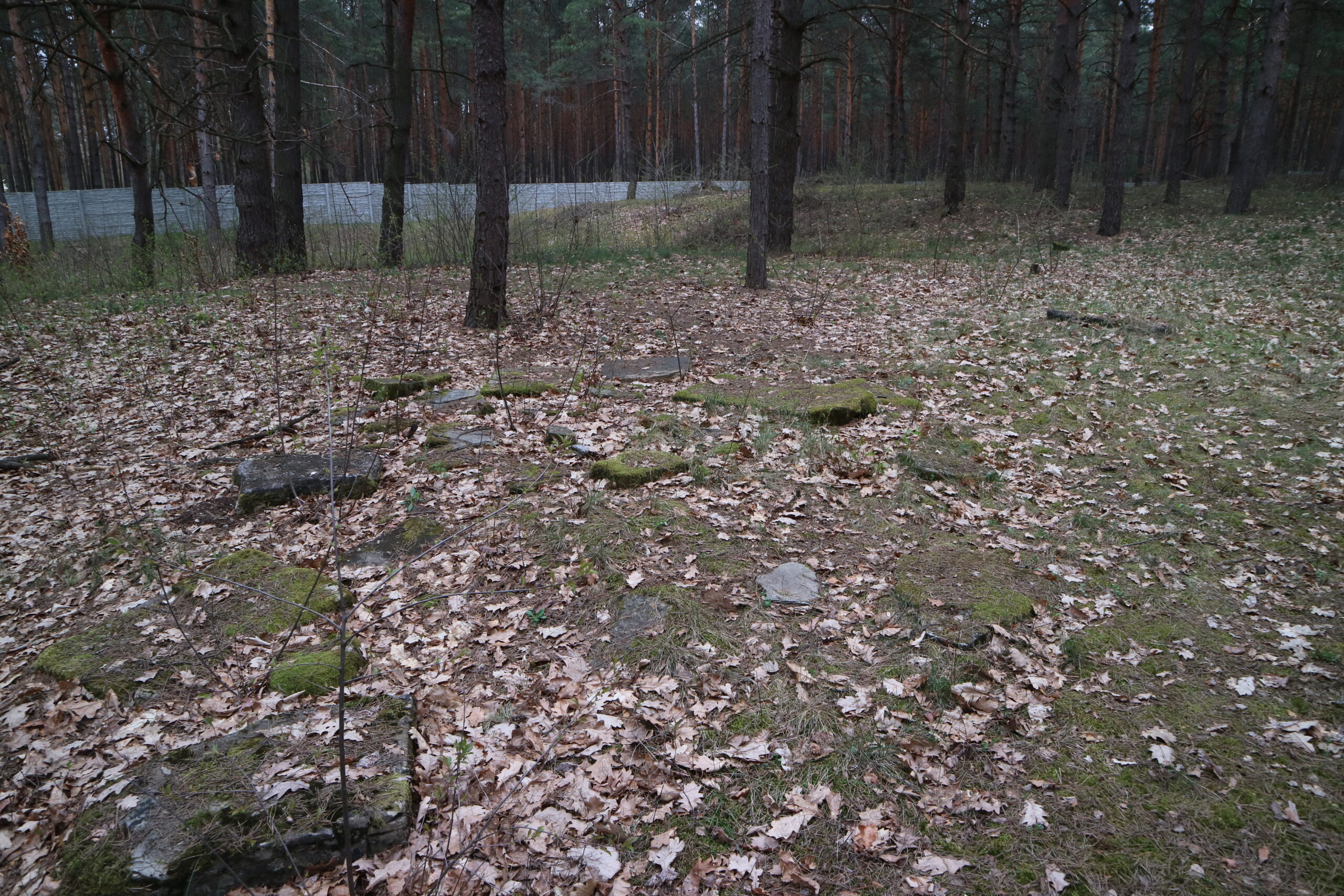 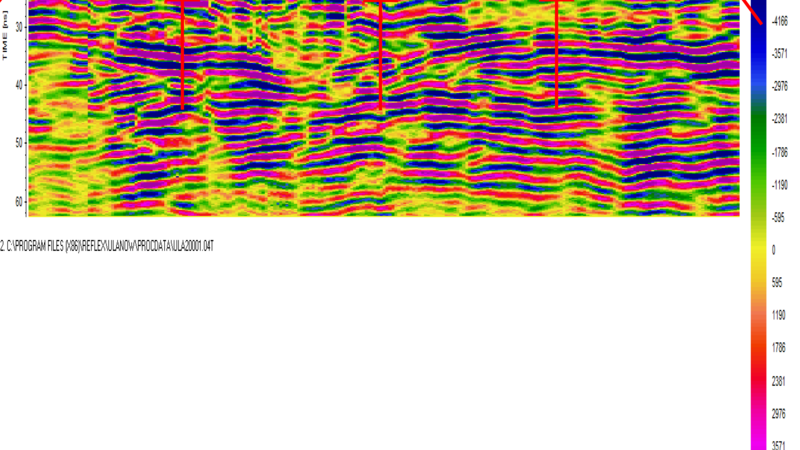 We are still looking for information on the identity of the victims and the location of Jewish graves in Ulanów. If you know something more, write to us at the following address: fundacjazapomniane@gmail.com.

IPN Rz 191/412, Surveys of The Chief Commission for the Examination of German Crimes in Poland – repressions against the Jewish population before the establishment of the ghetto – Nisko district, 1968-1969

IPN Rz 191/406, Information on the crimes committed by Germans in the Nisko district.

IPN Rz 191/403, Surveys of The Chief Commission for the Examination of German Crimes in Poland – executions in the Nisko district, 1968-1969

A copy of the card from the file of The Chief Commission for the Examination of German Crimes in Poland, files from: Provincial Office of Information and Propaganda in Rzeszów. Propaganda Department, and: Otrskommandatur I/524 Lublin.