In September 2015 we went to Tarnowo to meet Jan J., a retired forester and a gamekeeper born in 1932 who told us the story of two executions of Jews in the Cendrowizna forest located between Tarnowo and Miastkowo:

“During the German occupation Jews used to work there [in the Cendrowizna forest], there was also a murder near the gamekeeper’s [lodge]. Young people from the village were planting forest and the gamekeeper was supervising them. The Gestapo from Łomża came and asked whether ‘Jude’ were working there. There were eight Jewish girls, they were raped and shot.

My uncle was a cobbler. He was carrying shoes to the military police commander. He was just entering the forest when [he saw] Germans ushering people to the forest, 2 or 3 Jewish families from Łuby-Kurki. And then – gunshots. The gunshots ceased and a 10-year-old Jewish boy ran out to the path, escaping. [A German] shot him in the back [of the head] so his brain exploded. The Germans jumped on the cart and left everything. My uncle delivered the shoes and was walking back. He wanted to see what they did in the forest. [Later] they brought someone in [to bury the bodies] because they [the Germans] thought they [the Jews] had gold so they didn’t want [people from the village] to do it and brought labourers in. There are two large trenches from 1920, there was a military hospital there. In those trenches there are two or three families.

In Tarnowo there were five Jewish people living next to one another, Fiszek, Kawka, Dawid, Elek.” (Tarnowo, 4 September 2015.)

More details about the Jewish families from Tarnowo and their fate can be found in the accounts of witnesses who in 1970s testified in the investigation of the crimes committed by the German military policemen from the police station in Miastkowo:

Julian R. (S164/68), a testimony from 7 June 1973: “In Tarnowo the military police murdered Jews who used to live in our village. They were Eliasz Kawka, a 50-year-old farmer and Siepsu, a 50-year-old butcher. I didn’t see the very moment of murdering these Jews. I only heard gunshots and screams of the murdered Jews. It was towards the end of 1941, I think. […] They were buried on Eliasz Kawka’s yard first and later moved to the cemetery in Śniadowo. As far as I know this crime was committed by the military policemen from the police station in Miastkowo.”

Władysław J. (S164/68), a testimony from 7 June 1973: “I don’t remember the exact date but I think that in 1941 or 1942 military policemen from the police station in Miastkowo murdered two Jews in our village [Tarnowo.] They were Eliasz Kawka, 50 years old and Siepsu. Kawka was a resident of our village and Siepsu, as I heard, came from Nowogród and was in Tarnowo just for a short time. […] Because I lived near Kawka, I heard the gunshots. […] The body of the murdered man was buried by other Jews who were still living in the village. They buried him on his yard first and later moved him to the cemetery in Śniadowo. Sometime later Jew Siepsu was also killed. I’d like to mention that Siepsu could have been killed before Kawka. His body was buried behind a barn but I don’t know which one. Apparently, it was later moved to the cemetery. I don’t remember the exact date but [it was] a year or two after Germans arrived in our area […] near the Nowiny colony. There was a forest nearby, so-called Tarnowski. At some point I heard gunshots near the forest. I went to Nowiny to find out what was going on because apart from gunshots I could also hear people screaming. I found out that the military police from the police station in Miastkowo were shooting Jews. […] Sometime later I went to the place of execution and saw human bodies which had been buried earlier by the policemen, partially uncovered. […] It was a Jewish family of 6, perhaps.”

During the site inspection in the forest Jan pointed out two large ditches where, according to our interlocutor, bodies of the Jews from Łuby-Kurki were meant to be buried. Establishing the exact location of the graves requires further non-invasive field research. 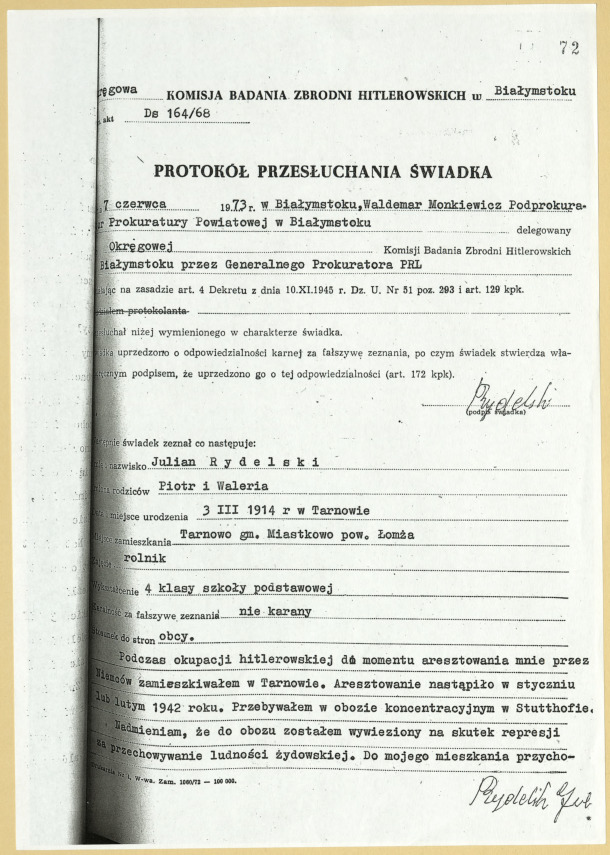 We are still looking for information on the identity of the victims and the location of Jewish graves in Tarnowo. If you know something more, write to us at the following address: fundacjazapomniane@gmail.com.

DS 164/69, Files on criminal case of crimes committed by German gendarmes from Miastków, Łomża district in Miastków and surrounding villages in 1941-44, p. 72-76.