LIST OF VICTIMS
Jankiel Kon with his wife, daughter and mother-in-law

The Register of Killing Sites and Crimes committed in the area of the former łomżyńskie voivodeship in 1939-45 (Warsaw, 1985) records the following crimes in Szczepankowo:

More details about the circumstances of the death of Jankiel Kon and his family can be found in the testimonies of the witnesses submitted as part of the investigation into German crimes committed in Miastkowo, Łomża district and surrounding villages in 1941-44 (IPN Ds. 164/69):

Stanisław G.: „I don’t remember the exact date, but probably in 1943, Jews were hiding in a forest called Szymańce. They used to come to my parents for food. That’s why I know that they were hiding in that forest. My mother said that it was Jankiel Kon from Szczepankowo with his family. […] After some time I found out from Kossakowski that these Jews were murdered by the German military policemen from the station in Miastkowo. After murdering Jews, the Germans came to Kossakowski to take shovels which they used for burying the bodies. Kossakowski claimed that the crime was committed in the morning.” (S 164/69 testimony of July 25, 1973)

Józef Ch.: „I don’t remember the exact date, it could happen in 1943. Jews were hiding near my colony. They made a dugout in the Szymańce forest and they lived there. I think it was Jankiel Kon, his wife, daughter and mother-in-law who hid there. One day, at dawn, I heard shots coming from the forest, about half kilometer from my property […] the Jews were murdered in the forest by the military policemen from Miastkowo. They were passing by near the forest and noticed a fire lit by Jews to prepare the food. They went to the place where they saw the fire and immediately shot the people around the fireplace. […] I cannot indicate the place where the bodies were buried.” (S 164/69, testimony of 25 July 1973)

Stanisław Z.: „A large Jewish family lived in Szczepankowo. There were probably 10 of them. In 1942 or 43 the military policemen from Miastkowo captured this family and took them somewhere. I don’t know where they took them. No one from this family gave any sign of life. There was also another Jewish family named Brodacz. Brodacz was a saddler and his name was Szmulek. […] Ha had a wife and three children. They were hiding near our village. The Germans took them away and then shot them, but I don’t know where. In 1942 r 43 military policemen from Miastkowo killed 3 or 4 Jews that were hiding in a dugout in a forest near our village. Germans murdered them inside this dugout by throwing a grenade inside and they buried the bodies in the same place.” S 164/69, testimony of 6 June 1973)

Leon Ś.: „Several Jewish families lived in Szczepankowo. One of them was called Mosiek Kon. He had a large family. The military policemen took them to the concentration camp in Majdanek in 1942. Kon’s family consisted of about 10 people. Let me mention that 3 or 4 Jews were killed in a forest near our village, also in 1942. I did not see the moment of the shooting, because the execution took place in bushes about 1,5 km away from our houses. […] Kon’s family died at Majdanek, but not all of them. Josel Kon, who came from Łomża, was taken from our village and was shot in Miastkowo. Also Jołka Kon, who was 16 years old, was shot in Miastkowo.” (S 164/69, testimony of 6 June 1973)

Stanisław N.: „I don’t recall the date exactly, but in the summer, probably in 1942 or 1943, the German military policemen from the station in Miastkowo murdered about 4 or 5 Jews in a forest near our village. The Jews were hiding after the extermination of the Jewish population and liquidation of the ghettos. I don’t remember the names of these Jews. One of them was called Mortek, he came from Szczepankowo but lived in Łomża. He escaped from Łomża and together with the others they built a dugout in which he hid with his whole family. The Germans discovered this hideout and killed everyone by throwing a grenade inside. They buried the bodies in this dugout.[…] As I recall, a resident of our village, a Jew called Mosiek, called Rymarz, aged around 45, was taken by the Germans to Miastkowo and murdered there together with his wife and two underaged children. I remember that his son’s name was also Mosiek and his daughter’s name was Syrka. I have not seen the execution, so I don’t have exact information about its course.”(S 164/69, testimony of 6 June 1973)

In the summer of 2017, we held talks with some of the oldest residents of Szczepankowo about the Jewish Kon’s family hiding in the Szymańce forest. In the recorded reports, there is and information about at least two Jewish families hiding in the forest near Szczepankowo:

„They were living where the cooperative [farmers cooperative association] is now, it was a Jewish farm, there was a windmill, and there was a family: Jankiel, Josef. In 1942 they took them to the ghetto.

– To Łomża. There are trees there, someone went there, saw them and told the Germans that the Jews are hiding somewhere there. They reported it to the military police and they arrived. I don’t remember how many of them were hiding there, only that it was somewhere in this forest.

– Does anyone know where they are buried?

– Those who knew are no longer alive.

– And could they have passed it on to someone?

– They are somewhere in this forest, but it was 1942/43, who remembers about it… I know that someone told me that they killed them there, but I don’t know how many of them were there.” (Szczepankowo, July 2017)

Our other interlocutor remembered that three Jewish families lived in Szczepanków before the war:

„- So there were three Jewish families in Szczepanków?

– Yes, three families. There was Brodacz, Kon, I don’t remember the third family’s name. One family lived here, in the village. And the other two lived near the windmill, they had a windmill. They lived off this windmill. The windmill is not there anymore, as well as the building. Only the quare remained.

– And what happened to these families?

– As with all the Jews. The Brodacz family was taken immediately once the Germans entered this region.. The other family hid. They hid, but not for long. Maybe two months.

– No, not in the house, in the forest. But winter was coming, so they came to the manor barn. Behind the church, there are manors. They came to the barn. And someone said that they are hiding there. And it was not the military police who took them, but they informed the mayor to bring them to Miastkowo.

– There were three young people, a girl named Cylka/Cyrka, a boy called Moszek and a boy called Bociek. And this Bociek was the oldest one. And with this Cylka, we sat at the same desk at school. She was a very nice girl. She did not look like Jewish, she was blonde. A very nice girl.” (Szczepankowo, July 2017)

We have not managed to find any information about the burial place of the murdered Jewish families. 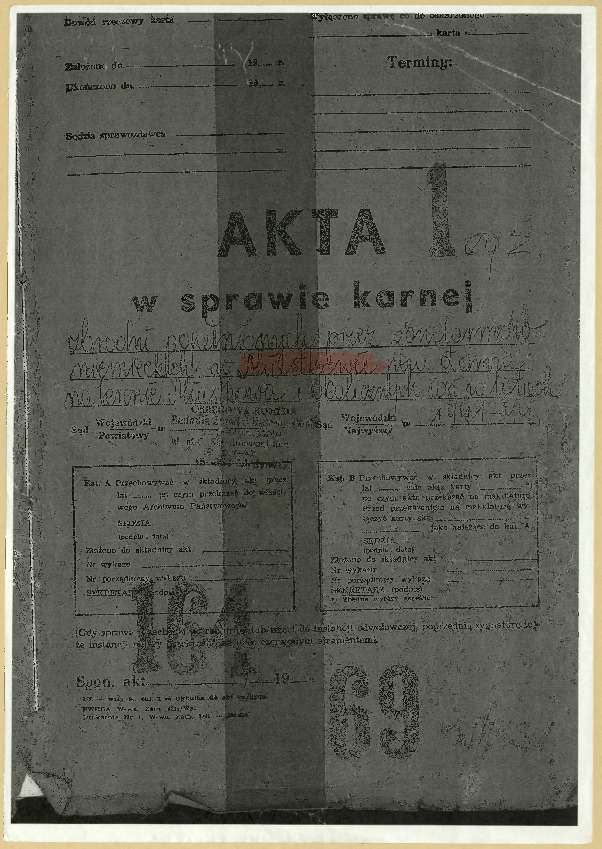 We are still looking for information on the identity of the victims and the location of Jewish graves in Szczepankowo. If you know something more, write to us at the following address: fundacjazapomniane@gmail.com.

Ds 164/69, Files on the crimes of German military policemen in Miastkowo, Łomża district, in Miastkowo and the surrounding villages in the years 1941-44

The Register of Killing Sites and Crimes committed by the Germans in Poland between 1939 and 1945. Łomżyńskie district. Warsaw 1985

We would like to thank the Conference on Jewish Material Claims Against Germany (Claims Conference) for funding the research project, thanks to which we obtained materials about this town.