On July 18, 1942, in the manor park in Strzegocice,the German military officers from Jasło murdered with the shot on the back in the head 14 men brought from an unknown locality. The names of them have not been established. The bodies were buried in the place of the execution (The Register of Crimes and Killing Sites committed by the Germans in Poland between 1939 and 1945, Tarnowskie province, Warsaw 1984).

The survey of The Chief Commission for the Examination of German Crimes in Poland specifies that these men were aged between 20 and 40 years old (IPN BU 2448/846). According to an article published in  “Wiadomości Brzosteckie” in July 1999 the last Rabbi of Brzostek was killed in the execution in Strzegocice.

A very extensive account of this event was included in the article published in „Rzeczpospolita” magazine on January 9, 1999 written by Jerzy Jastrzębowski, where he cites the account of prof. Jan Łopuski, son of Maria Łopuska, the pre-war owner of the property in Strzegocice: “The manor house and the park are situated on the road from Pilzno to Jasło. At the end of May 1942, while driving along this road, I noticed a German truck standing on the roadside. On the uncovered platform there was a large group of Jewish prisoners with armbands, guarded by the SS men with rifles. From the park side, there was a group of SS men with rifles in their hands walking across the field towards the car. What they were doing there? The feeling had to be the worst. After a few minutes I was already home. Household members and servants were frightened. Shots were heard in the park. (…) It was easy to guess what was going on. It was the period of the so-called Judenaktion – mass murder of Jews. I went alone towards this part of the park from which the SS men I had seen before were walking. (…) I didn’t have to search long. Close to the hedge separating the park from the field, on a slope of a quite wide, dry moat, there were bodies of fourteen men. (…) They were lying face down, in dirty underwear, with the blood on their heads, their bodies were emaciated. I felt sick. (…) Suddenly I heard the voices of people from behind the hedge. (…) Several Jews went out from the bushes without a police escort, with armbands on their sleeves and shovels in their hands. (…) They looked at their lying brothers first, then at me. Their look was not friendly. (…) I could understand that. I belonged to a different category and had a further order assigned. I told them where it was best to dig a pit – at the bottom of the moat. (…) I didn’t find out, or I don’t remember, where these gravediggers came from: whether from a truck, sent by SS men, or from Pilzno, sent by the blue police.” (http://www.jerzejastrzebowski.pl/?p=91, accessed October 8, 2020)

The Foundation’s resources also include a letter from December 2011 in which Abraham Adam Szus (born in 1917) describes the circumstances in which he found out about the murder in Strzegocice: „I remeber well the tragedy of the Jews of Brzostek during war. In 1943 I escaped from the „Lwów” camp in Janów and returned to Brzostek. I went to my friend, Wojciech D. He contacted me with the Jews hiding in the Jaworze Dolne forest and I met familiar Jews from Brzostek. From them I found out that the Rabbi of Brzostek, Haim Wolkenfeld and Mojżesz Oling, and few other Jews were taken by Gestapo from Jasło during the transportation of the Jews to the camp in Pustkowie. On the way, in Strzegocice, they killed rabbi Haim Wolkenfeld and Mojżesz Oling and several other Jews. A few Jews escaped to the forest. During their stay in the forest in Jaworze Dolne people talked about the tragedy of the local Jews. After the war my friends Stanisław P. and Jan D. told me that Rabbi Haim Wolkenfeld was murdered in Strzegocice.”

In 2012 the commune office in Pilzno commemorated the victims of the execution in Strzegocice with a plaque in Polish and Hebrew. In September 2018 the Zapomniane Foundation reached the descendant of a witness of this murder, who indicated the place of burial far away from the memorial stone, on the edge of the forest. We conducted a GPR survey in the indicated place.

On September 3, 2018 the site inspection was carried out to determine the location of a mass grave of fourteen people. The area indicated by a witness is located in the northern part of the manor park in Strzegocice (GPS: N49°57.236′ E 021°18.989′). The location is close to the border of the park. There is a convenient access to the indicated place by a field path running along the west-east axis.

The LiDAR survey shows numerous disturbances of the soil in the indicated location. The place was subjected to GPR research. The echograms: STG10001, STG10002, STG10003 show an anomaly with an approximate measurement: length approx. 3.5 m, width approx. 2.0-2.5 m, depth approx. 0.80 m below the ground level. The recorded echograms also show other anomalies, that may be related to tree roots or other soil disturbances.

The case of Strzegocice requires further location research in order to precisely determine the actual place of the mass grave. 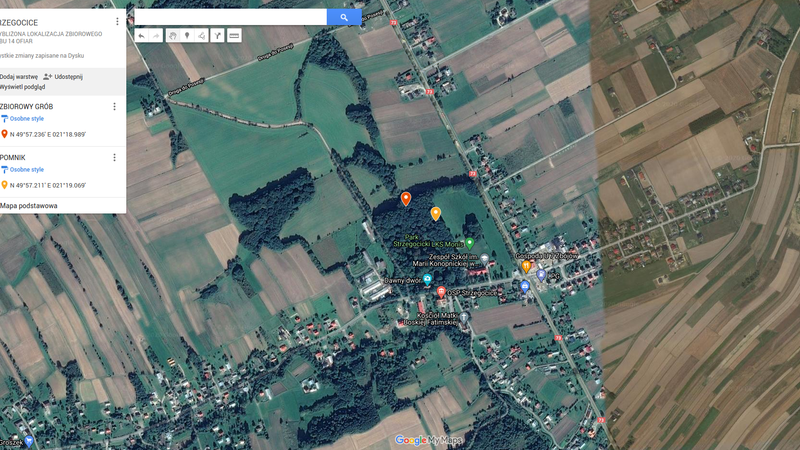 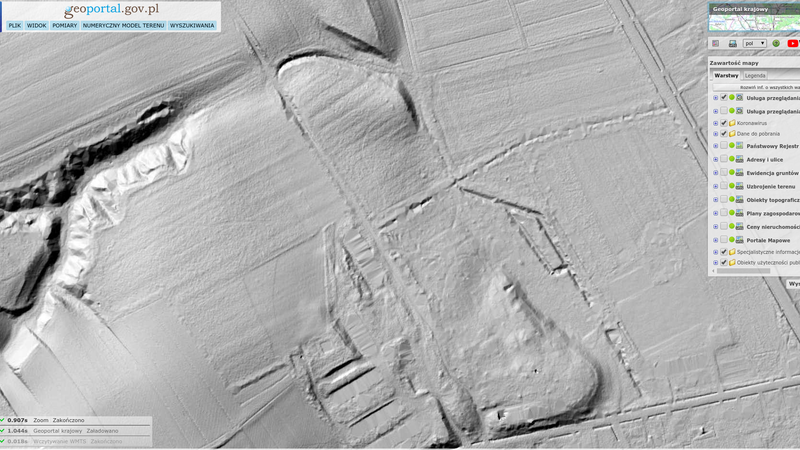 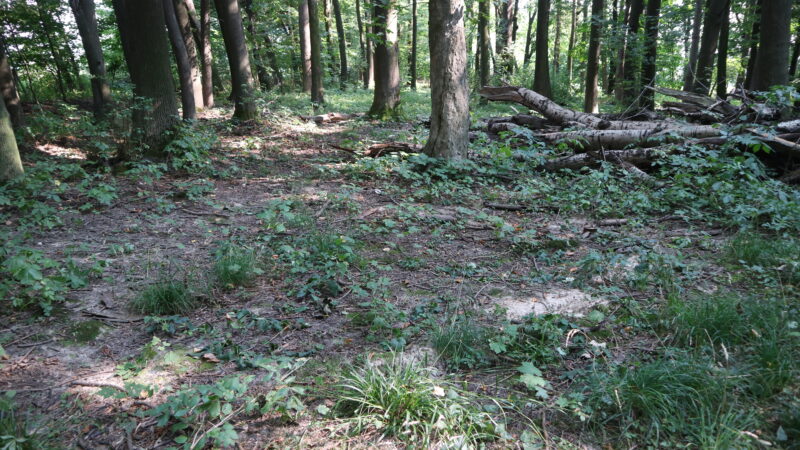 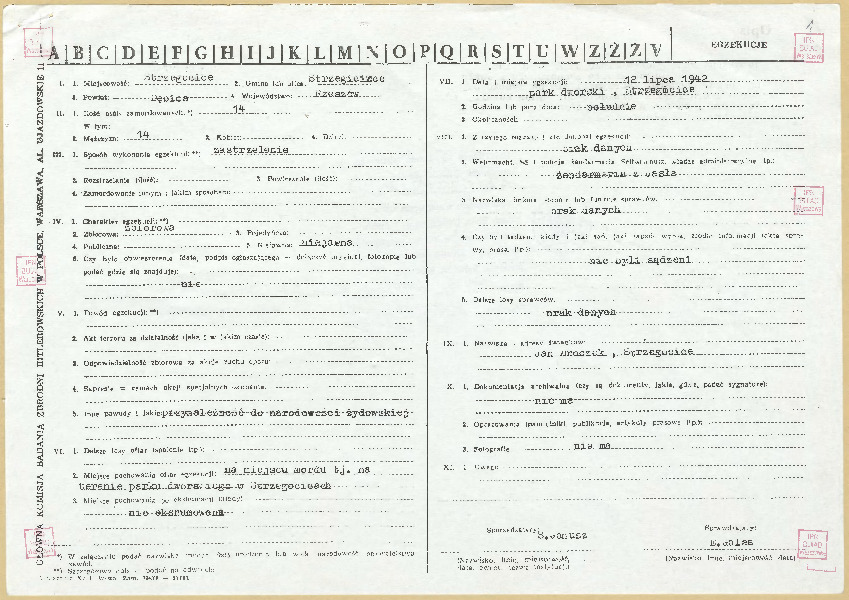 We are still looking for information on the identity of the victims and the location of Jewish graves in Strzegocice. If you know something more, write to us at the following address: fundacjazapomniane@gmail.com.

Jastrzębowski Jerzy, Fourteen men from Pilzno, [in:] „Rzeczpospolita”, January 9, 1999 [printout of the article from the Internet].

IPN BU 2448/846, surveys of the The Chief Commission for the Examination of German Crimes in Poland, “Executions”, Strzegocice, Dębica province, rzeszowskie voivodeship.

Frączek Tadeusz, History of the Jewish population in Brzostek and the surrounding area during World War II (based on an interview conducted on May 12, 1959 with Obschuss Abraham, a Jew from Brzostek who survived the occupation), [in:] “Wiadomości Brzosteckie The magazine of the society of Brzostek ethusiasts, the Borough Council and the Culture and Reading Center in Brzostek, monthly magazine no. 4 (41), 8 July 1999, p. 9.

The Register of Killing Sites and Crimes committed by the Germans in Poland between 1939 and 1945. Tarnowskie Voivodeship, ed. The Chief Commission for the Examination of German Crimes in Poland, Warsaw 1984, p. 36, 181.

Resources of the Zapomniane Foundation,a letter addressed to the Rabbinical Commission on December 10, 2011 from Mr. Abraham Szus, a resident of Sydney, Australia, containing his father’s statement on the circumstances of the murder of Rabbi Chaim Wolkenfeld in 1943.

IPN BU 2448/857, surveys of The Chief Commission for the Examination of German Crimes in Poland, “Repressions on the Jewish population …”, Brzostek, Jaslo borough, rzeszowskie voivodeship.