LIST OF VICTIMS
2-4 Jews from the ghetto in Kleszczele who were hiding in Policzna.

In a forest, next to a dwarf pine tree, approx. 1000 metres from the Polish-Belarussian border.

Near the village of Starzyna approx. 1000 metres from the Polish-Belarussian border there is to be a grave of Jews from the ghetto in Kleszczele who were hiding in the village of Policzna. A farmer called Kozak who was killed for giving shelter to the Jews, was buried in the same grave with the Jews. His body was probably exhumed after the war and moved to a cemetery. There are discrepancies regarding the number of the murdered Jews. According to our interlocutor, a resident of Starzyna with whom we met on 27 August 2014, they were two men, while according to the documents by the Chief Commission for the Examination of German Crimes in Poland there were four of them (GK 162/419). Another document specifies that among the murdered there were three men and a woman. They were meant to be shot on the Bahura Range (IPN BU 2448/27, chapter 115). On 27 August 2014 we conducted a site location in the forest where the Jews were meant to be shot and buried. A son of the man who buried the bodies of the victims took us to the place. According to him, the Jews were meant to be buried next to a dwarf pine tree. The murderers forced the Jews to dig a grave for themselves. Unfortunately, the pine tree where the grave was meant to be located withered and was removed by foresters. That way the only landmark allowing for the location of the grave disappeared. 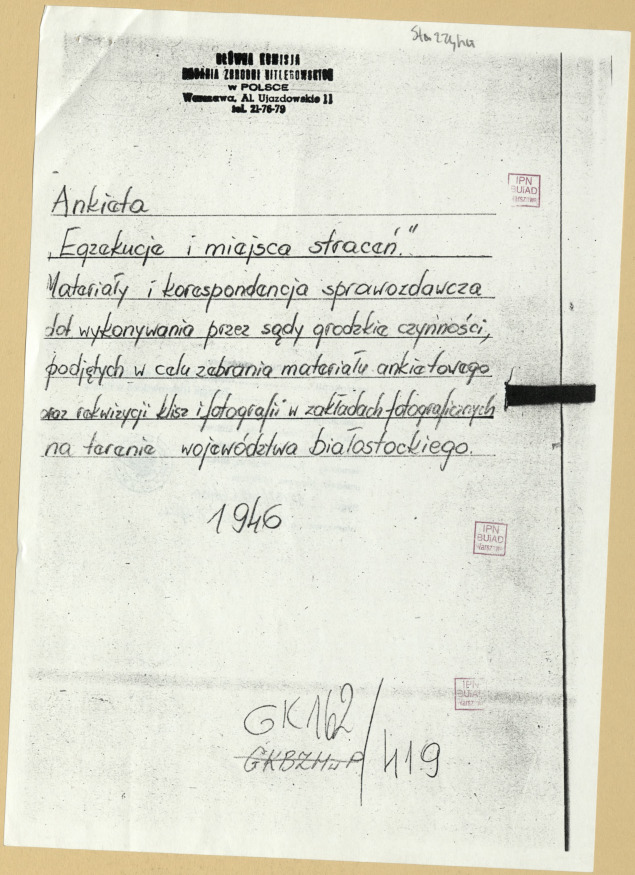 We are still looking for information on the identity of the victims and the location of Jewish graves in Starzyna. If you know something more, write to us at the following address: fundacjazapomniane@gmail.com.

Recording of the Zapomniane Foundation (audio file), name: lack of data [son of an eyewitness], b. [lack of data], place of residence: Starzyna, subject and keywords: Jewish graves in Starzyna, Extermination of Jews in Starzyna, interviewed by Agnieszka Nieradko, Starzyna, 27 August 2014.

GK 162/419, k. 34, Questionnaire: Executions and execution sites, materials and reporting correspondence regarding the performance by the city courts of actions taken to collect the survey material and requisition of photographic plates and photographs from photographic factories in the Białystok province.

GK 162/436, k. 115. Lists and supplementary materials to the questionnaire about executions in the białostocki and ciechanowski districts.