In July 2017 we went to Skroda Wielka to look for information about a Jewish man who was killed in Skroda in February 1943 by the military policemen from the police station in Grabowo. This fact was mentioned in the Register of Sites and Crimes from 1985. The man was probably a resident of Skroda Wielka. The same document recalls the murder of Stanisław Białowąs, a 24-year-old tailor, by the military policemen from Stawiska committed in Skroda Wielka in September 1944. (The Register of Sites and Crimes , Łomża Voivodship, p. 188.)

A resident of Skroda Wielka told us the following story: “There was a Jew in Skroda, [he was] a tailor. He was killed on the road because he didn’t have any documents with him. Two of them were travelling, Wacek Skrodzki and this Jew. Skrodzki showed some tax paperwork but the Jew had nothing and that’s why he was killed and buried in the woods. He’s buried somewhere there in the forest. Two military policemen were riding horses, they wanted to see their papers, the Jew had nothing and he got a bullet in the head. A wooden fence was made but after so many years…” (Skroda Wielka, 15 August 2017.)

Another resident (born in 1937) gave the following account of the event: “They went to get some wood with Wacek [Skrodzki], they told them to show their papers, he [Skrodzki] showed the document [stating] that he was a farmer so they let him go but they killed [the Jew] immediately. There were hollows there so the body was thrown  in a hollow next to a conifer, near the road. The hollows had been [made] to store potatoes. There is still a sign but overgrown now. Iciek Białowąs he was called. We hid many [Jews] here, in our house there were two families of tailors hiding.” (Skroda Wielka, 15 August 2017.)

The murder of a man called Białowąs was recalled by the eyewitness, Wacław S., with whom Białowąs was going back to the village on that tragic day. The testimony from 1 August 1972 (S 25/67): “I’d like to mention that on that critical day I went with Białowąs in a cart to the forest. On our way back, about 500-600 metres from the village we were stopped by the military policemen. It was in the afternoon. The military policemen asked for our documents. I had my ID [on me] but Białowąs didn’t have any documents with him. He came from Ławsko but he lived in Skroda where he worked as a tailor. We asked the military policemen to go to the village and check Białowąs’s documents [there.] But they didn’t want to do it. A moment later the policeman who was accompanying Kulasko hit Białowąs in the head with the butt of his rifle. Kulasko ordered him to shoot Białowąs. He spoke German but I guessed the meaning of his words because Białowąs was shot immediately. I was a couple of metres away from Białowąs because we were sitting together on the cart. Białowąs was hit in the head. He died on the spot. The policemen told me to get off the cart and bury Białowąs with my hands. […] When Białowąs’s body was almost buried, the policeman who had shot him shot once again, hitting the body in the stomach. […] Shortly after, the wife of the murdered man unearthed his body and moved him to their house. Then she buried him on the cemetery.”

A testimony from 13 February 1971, S. 25/67: “In the forest in Skroda German military policemen murdered a tailor from Skroda Wielka. Apparently he was called Białowąs.
I heard he was shot only because he did not have documents with him.”

None of the witnesses quoted above who testified in 1970s mentioned that Białowąs the tailor was Jewish. We can guess thattwo similar events took place in Skroda Wielka: the murder of Polish tailor Stanisław Białowąs and the murder of a Jew of an unknown name. Perhaps the circumstances of both murders were similar, perhaps the murdered Jew was also a tailor. It is difficult to answer these questions with data we possess. It is sound to conclude, however, that murdered Stanisław Białowąs and the Jewish man were two different people.

During the site inspection in August 2017 one of the residents of Skroda showed us an approximate location of the burial of the man who was meant to be the Jewish tailor. Students from a local school used to look after the grave after the war. Establishing the precise location of the grave would require conducting a thorough non-invasive field research.

“In the same forest military policemen murdered two young Jews (a woman and a man.) They were an engaged couple. I saw their bodies lying in the forest as soon as the policemen left. They were 20-30 years old.” (A testimony from 13 February 1971, S 25/67.) 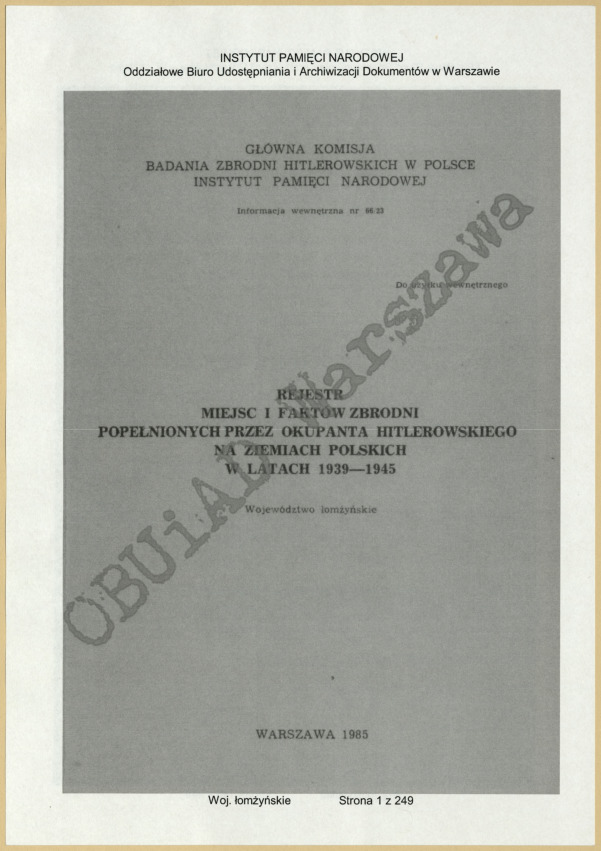 We are still looking for information on the identity of the victims and the location of Jewish graves in Skroda Wielka. If you know something more, write to us at the following address: fundacjazapomniane@gmail.com.