The Jewish cemetery in Radzymin.

The ghetto in Radzymin operated from September 1940 till October 1942. Approx. 2500 people altogether were imprisoned there. According to the Questionnaire of the camps, approx. 700 people lost their lives during that time and their remains were buried on the Jewish cemetery in Radzymin (IPN GK 163/62). The same cemetery was the place of burial of the Holocaust victims after the liquidation of the ghetto in Radzymin and the deportation of the remaining Jews to Treblinka. According to the Register of crimes and killing sites, the Jewish cemetery in Radzymin was the location of the following events:

On 19 May 2015 Leon N., a resident of Radzymin born in 1930, told us about one of the murders committed on the Jewish cemetery that he witnessed: “There were two killers [in Radzymin]: military policemen Hoppe and Radke. They had their headquarters where the gardening school is right now. They were leading a 17 or 18-year-old Jew from there. We used to ride bicycles here. I was 13 and I knew why they were escorting him because it was well known that they were persecuting Jews. I told my friend (he died by now): ‘Look, Jurek, they are probably leading him to be shot. Let’s hide. Be quiet because they will shoot us too.’ They were escorting him, he was a pretty boy. He entered [the cemetery.] The grave had already been prepared, dug by Mr Paciorek. He [the military policeman] shot him and he fell. When he fell, Mr Paciorek arrived, approached him, turned him around, took off his clothes and shoes, took a spade and buried him. Then the Germans left.” (Radzymin, 19 May 2015.) 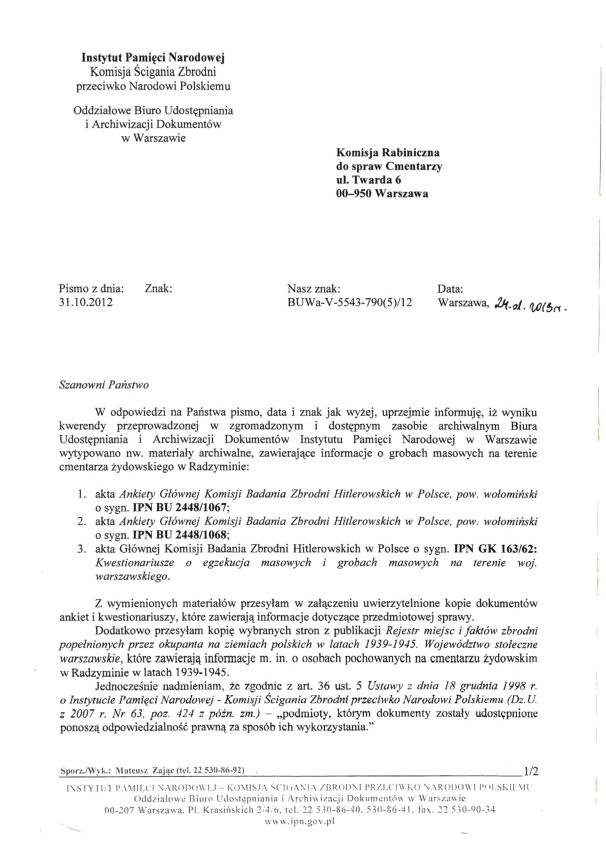 We are still looking for information on the identity of the victims and the location of Jewish graves in Radzymin. If you know something more, write to us at the following address: fundacjazapomniane@gmail.com.

IPN BU 2448/1067 from the files of the group of the Chief Commission for the Examination of German Crimes in Poland, Wołomiński district.

IPN BU 2448/1068 from the files of the group of the Chief Commission for the Examination of German Crimes in Poland Wołomiński district.