In the spring of 1940 in Popławy, on the suburbs of Pułtusk, approx. 100 people were murdered (between 90 and 120 people) – Poles and Jews. Their bodies were buried at the place of execution, 300 metres from the road from Pułtusk to Psary, near the swamp. A grave measuring 5-9 metres long was dug in a large gorge. The victims came from Jabłonna and Legionowo. Among them there were also people captured on the customs border which existed in the southern part of the Pułtusk District. (IPN GK 163/44)

The murder of a group of Jews committed in 1940 in Popławy was also recalled by the scouts report (Alert Harcerski). The note was accompanied by a drawing made by the scouts which includes an approximate location of the common grave.

Since the autumn of 1939 the Popławy estate served as the site of mass murders of the local population. The same scouts report mentioned a murder of 150 Jews who were ushered to the place of torment from the direction of Wyszków. The victims were placed in groups on a hill and shot to death. Their common grave is meant to be located on the hill, 100 metres away from the left bank of the Narew river, on the other side of Pułtusk. Its approximate location can also be seen on the drawing. (IPN GK 195/XV/210)

The Register of crimes and killing sites also noted that between 29 September 1939 and the end of 1939 on the Popławy estate the German military police shot to death approx. 200 Jewish men, women and children. Their bodies were buried at the place of execution. 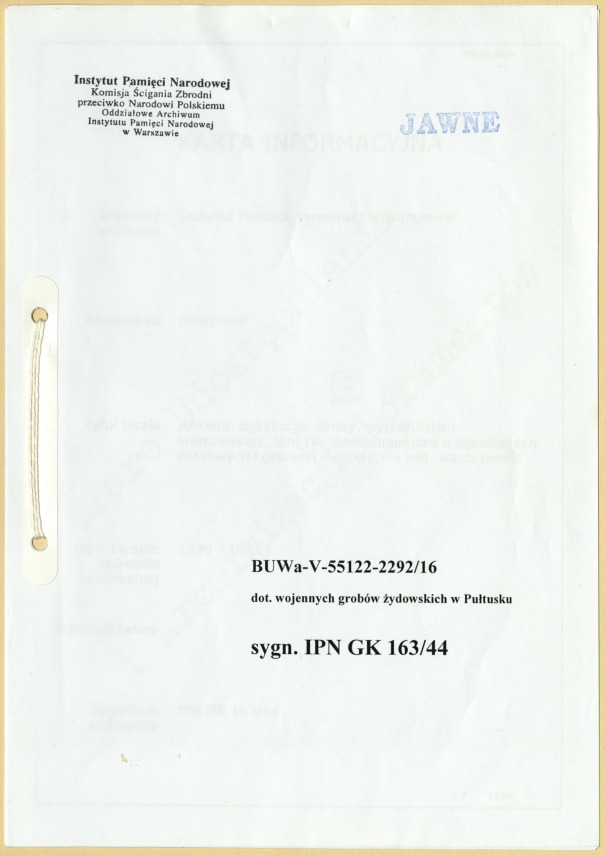 We are still looking for information on the identity of the victims and the location of Jewish graves in Pułtusk. If you know something more, write to us at the following address: fundacjazapomniane@gmail.com.