The first act of terror against the Jews in Przeworsk took place in the second half of September 1939 when the Germans set the local synagogue on fire. Few days later the Gestapo gathered all Jewish men on the square in front of the town hall from where they were ushered to a garden on Bernardyńska Street where they were tortured (IPN Rz 191/450.) This event has been remembered by one of the residents of Przeworsk who in December 2015 contacted The Foundation for the Preservation of Jewish Heritage in Poland. His grandparents were eyewitnesses to the genocide of Jews from Przeworsk. “The Jews who lived outside of the burned Kazimierzowska Street were ushered to the so-called Brenardyńskie meadows already in 1939. There they were tortured with exhausting physical exercises. Our last Rabbi Frankel was also murdered there with at least one son and they were buried there. […] The fact of torturing Jews from Przeworsk on the Bernardyńskie meadows in 1939 was confirmed by my grandma who observed this event from a distance. [Przeworsk is located on a hill and from that side the hill is the steepest.]” (emails from 17 and 18 December 2015.)
It follows that in the area of Bernardyńska Street in Przeworsk there is a forgotten Jewish grave. Only in September 1939 approx. 30 Jews were murdered in single executions.

The so-called new Jewish cemetery in Przeworsk was also a place of torture and mass murders of the Jewish population. Currently a bus station is located there and the exact location of the mass graves remains unknown. The intensification of the Jewish genocide took place in 1939-1941. During this time approx. 150 Jewish men, women and children were murdered. Bodies of the victims were buried on the Jewish cemetery. The resident of Przeworsk quoted above recalls memories of his grandparents: “According to my grandfather, [Jews] were imprisoned in the town hall’s basement and taken from there to be shot in the new Jewish cemetery. On the other hand, my grandmother claimed that executions of Jews were conducted in the town hall itself. She claimed she saw bodies of the victims covered in blood there.” (email from 17 December 2015.)
The second wave of terror happened in 1942-1943. Approx. 90 people altogether were brought in from surrounding villages and shot. Their bodies were buried in ditches on the Jewish cemetery and on a private field in the area of Mokra Strona (IPN GK 163/36 k. 88).

On the bus station which had been built on the new Jewish cemetery in Przeworsk there is a small obelisk founded by a private person, Jan Sasak, now deceased. 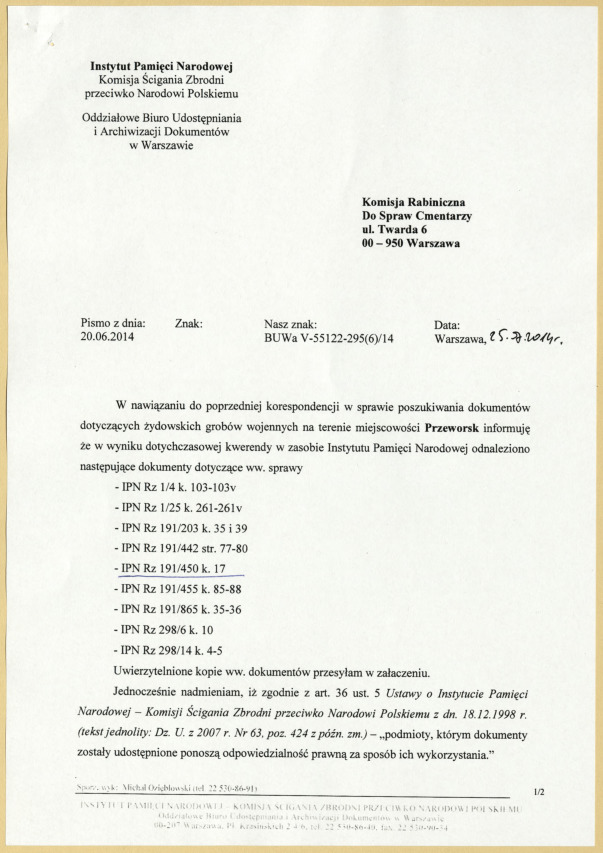 We are still looking for information on the identity of the victims and the location of Jewish graves in Przeworsk. If you know something more, write to us at the following address: fundacjazapomniane@gmail.com.

The register of sites and crimes committed by the Germans in Poland between 1939 and 1945. Przemyskie province, Warsaw 1983.

IPN BU 2448/888 Archives of the Chief Commission for the Examination of German Crimes in Poland, Przeworsk, rzeszowskie province.

IPN Rz 1/4 k. 103-103, The Regional Commission for the Examination of German Crimes in Rzeszów-Tarnów , rzeszowskie province during the occupation – executions, manhunts, pacification – report of hearing of the witnesses, a list of (illegible) victims of executions, copies of death sentences.

IPN Rz 191/450, k. 17, Questionnaire of the Chief Commission for the Examination of German Crimes in Poland, repression of the Jewish population before the creation of ghettos – Przeworsk district.

IPN BU 2448/890, Archives of the Chief Commission for the Examination of German Crimes in Poland, Przeworsk, rzeszowskie province.