Next to the brickyard.

The existence of a Jewish mass grave in the village of Poturzyn was made known to us in a letter sent to the Rabbinic Commission in December 2009. As a primary school pupil, Jan P. witnessed a murder of 10-11 Jews who were probably hiding in the local brickyard. A hand-drawn map was attached to the letter. It was pointing out an approximate location of the execution site and main orientation points. A year later representatives of the local Voivodship Office had a meeting in Poturzyn with further witnesses of this event. One of them testified that the murder took place in 1940. A group of Jews was meant to be hiding in the brickyard in Poturzun. Another witness claimed though that the event took place in 1942. Around 10 people were murdered then. According to the witness, the murdered people were fugitives from the death camp in Bełżec. The representatives of the Voivodship Office in Lublin conducted a site inspection of the place where, accoring to the witnesses, the mass grave was meant to be located. Unfortunately, it was impossible to establish the location of the grave.

Here is the letter written by Jan P.:

“The event I’d like to describe took place in the late autumn (October-November) 1942. At that time I was a 6th grade student in the Primary School in Poturzyn. I used to live in the neighbouring village – Horoszczyce – about 2 km away from Poturzyn. My everyday route to school led through field paths, also through the fields belonging to the Poturzyn Manor. Halfway through, there was an old brickyard. Walking back from school I often stopped there with my friends. One day we noticed that the area around the brickyard is beaten and that there was hay placed in the tunnels of the kiln.

We decided that grooms working in the fields must have been hiding there from the rain. Few days later when walking back from school we saw carts going towards the brickyard, carrying Ukrainian policemen from Poturzyn and several Wehrmacht soldiers who stationed in the Poturzyn Manor. When we reached the hill from which we could see the brickyard we saw a group of people surrounded by the policemen. A moment later we heard gunshots. About 8 or 10 people were lying on the ground. About 300 metres from the brickyard there was a shed where hay was kept. After hearing the gunshots, a large man jumped out of the shed and started running into the fields. The policemen shot several times. The fugitive fell – probably wounded. At this very moment from the direction of the Manor an attache (probably a German or a Ukrainian) arrived in a cart – the Manor was managed by the Forced Administrator. Several policemen approached the lying man. They attached him to a trolley and dragged him to the brickyard where the shot people had already been lying. They dug a ditch were the dead people were buried.

On the next day we found out from the grooms that it was a group of Jews from Poturzyn. Among them, there were people called Sender and Kiesel… I knew them personally. They were my parents’ friends. After the war I repeatedly tried to find out whether this place was somehow commemorated – unfortunately, I didn’t find any exact information and that’s why I decided to turn to the Rabbinic Commission.” (a letter from 10 December 2009, Nałęczów.) 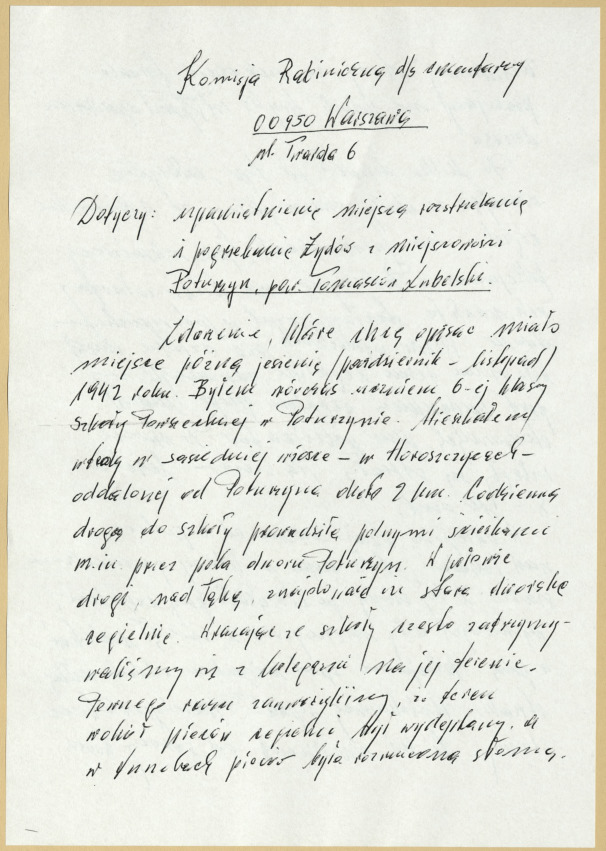 We are still looking for information on the identity of the victims and the location of Jewish graves in Poturzyn. If you know something more, write to us at the following address: fundacjazapomniane@gmail.com.

Resources of the Zapomniane Foundation, a letter from  Jan Proć of 10 December 2009 to the Rabbinical Commission for Cemeteries regarding the crime against 10 Jews in Poturzyn in 1942 together with a handwritten map of the place of murder and landmarks.

Resources of the Zapomniane Foundation, Letter of the Council for the Protection of Struggle and Martyrdom Sites addressed to the Chief Rabbi of Poland of 3 February 2011 regarding the results of the meeting with witnesses of the incident and the local vision of the crime scene.