The new Jewish cemetery in Piaski (at least 3 mass graves.)

While the ghetto in Piaski was still operating, the so-called new cemetery was used as a killing site  and burial place of the Holocaust victims several times. “Local military policemen from Piaski conducted individual and mass executions. In September 1942 families of Erich Szlija and Kochan Godela were shot on the Jewish cemetery. In July 1943 Mrs Kurlańska, a dentist, was taken out of her home together with her family and shot” (from Izabela Gładysz’s Masters’ thesis.) According to the Survey by the Chief Commission for the Examination of German Crimes in Poland (IPN BU 2448/573) one of the largest crimes against the Jews imprisoned the Piaski ghetto (if not the largest one) was committed in 1943. This day has been remembered as “a bloody Wednesday”: on the so-called new Jewish cemetery approx. 1800 people were murdered.

One of the residents of Piaski, born in 1932, observed one of those operations hidden in crops: “There were two graves. One perpendicular and the other parallel to the road. There was a ditch dug here, I can’t say how long it was but it was a long rectangle. [Now it is] on the border of the cemetery because everyone comes close and take over the cemetery bit by bit [farmers working the land adjacent to the cemetery.] [Jews] were standing on a plank of wood. They had to undress and stand on the plank. And Ukrainians were shooting. On the plank and to the ditch! When they left, the ground was moving, I swear to God! Because there was just a bit of soil [the grave was thinly covered.] Later they brought Jews from somewhere, I don’t know from where, to the ghetto and then from the ghetto they brought them here. They were led past my window. […] For me it was interesting what they would do with them – I was a child. […] There were so many of them. But they were not Polish Jews but those brought in from Germany.  And all Jewish clothes were left on the cemetery, covered with petrol or something and burned. And poor folks from Piaski would come here and search for things that hadn’t burned. All the Jews were ushered to the cemetery by Ukrainians. All the Jews from the ghetto to the cemetery… Past my window. The Jews themselves were digging those ditches [on the cemetery.] They were undressing and burning the clothes. And our folks [Poles] were going through these rags looking for gold.” (Piaski, 2 August 2017.)

Marianna K. from Piaski, born in 1924, had similar memories: “A Ukrainian commando and the SS-men burst into the ghetto. On Krótka Street, next to Drelichman’s house, was a provisional Jewish hospital. They shot all the people in the hospital and threw their bodies out of the window. And the rest of people with children were taken to the cemetery. Huge ditches had already been dug there. And [the Jews] were ushered there. And we went there to see what was happening. The military police from Piaski, SS-men and Ukrainian commando were taking part in it, led by Bloody Zygmunt. They were chasing and beating them [the Jews.] If [a woman] was carrying a child, they would shoot the child and the mother would carry its corpse. All the people had to undress and stand on a plank of wood which was there. A mother stood there with her child – the girl was carrying a doll. She didn’t know where she was going. But the mother knew. She [the woman] fell into the ditch. Rudolf Abel, a terrible military policeman, was standing by the ditch shooting with an automatic gun. She fell in and pulled the child because the child was holding her hand. And he finished them off. […] And that’s how they murdered them. The execution lasted all day. […] I wasn’t close enough to see the shooting but I saw them being ushered. Later, the military policemen and the Ukrainians bragged about it. When we went later to see, the ground was still moving…” (Multimedia Library Theatre NN, http://biblioteka.teatrnn.pl/dlibra/dlibra/doccontent?id=37481&dirids=1).

Let’s hear from another witness: “From the direction of the ghetto a massive column of people – men, women, children – walked escorted by military policemen. The whole crowd turned left just next to our house, continuing towards the woods next to which the Jewish cemetery was located. […] Windows were looking out to the field – [we heard] shots and screams coming from the nearby cemetery. Someone told us that a couple of days earlier a local fire brigade was called and ordered to dig massive ditches on the Jewish cemetery.” (Szlązakowa, Świetlicki, 2000.)

The location of the mass graves in the back of the cemetery has been confirmed by Anna Ś.: “There is no trace now, trees have grown and it’s difficult to see. [Before] there was grass and the grass became lusher. I can only say that I saw them being led. I saw it twice. I saw one being killed, here, he collapsed in front of my eyes. He was called Dreszer and he lived two doors from us. When they were led… it was the last group after they killed those ones [the largest execution on the cemetery.] They were hiding and they came out of their hideouts. Actually, Jewish policemen also uncovered hideouts and I think they were the ones who found the last group. There were many children and elders, a few young [people] and Dreszer, Maniuś Dreszer. He was running away, they shot and killed him. I was standing at the gate and I saw it.

Another [Jew], also young, ran away into the fields but they chased him and killed him. They took their corpses to the Jewish cemetery. Dreszer’s father was killed earlier. Apparently he was  killed on the spot where the post office is located now.

With regards to the mass execution, I saw something very moving: I was near the old school and they were chasing people. It was a large group, many elderly people found in nooks and crannies. There were also children but fewer of them. In the other group there were many children… An old Jew with a long beard took out a piece of bread from his pocket. They knew they were going to be shot – you could hear the shooting and the execution. He took out a piece of bread and started chewing. A German pushed him. It was very muddy and he [the Jew] lost a shoe in this mud. He wanted to pick it up. The German pushed him with his gun and didn’t let him [pick up the shoe.] And he walked through Mogilna Street, half-barefoot, chewing on the bread.

It was Wednesday, the market day. They were led through Piaski. Everyone else ran away. I lived through both of them [the executions.] And all the time I could see this Jew chewing on his bread. He knew he was going to die but he was hungry.” (Piaski, 2 August 2017.)

According to the Questionnaire of mass executions and mass graves from October 1945, the victims of the murder in 1943 were buried in a ditch measuring 16 metres by 10 metres and about 3 metres deep (IPN GK 163/15.) In Izabela Gładysz’s university essay, however, ditches were mentioned in plural: “The fate of Jews towards the end of the existence of the ghetto had already been sealed. The remaining Jews (approx. 1000 of them) were taken to the Jewish cemetery on Wednesday in November 1943. After getting undressed, they were individually shot next to the previously dug ditches measuring 3 metres by 4 metres by 10 metres.” (Gładysz.) Meanwhile, a chronicler of the history of Piaski, Lucjan Świetlicki, stated there were at least three mass graves on the Jewish cemetery: “Jews who had been hiding in nooks and crannies, cellars and concealed closets were gathered in columns, ushered to the local Jewish cemetery and shot next to the three massive ditches that had been previously prepared. It was on 3 November 1943 when the ghetto in Piaski was liquidated.” (Świetlicki, p. 48.)”

On the 29th of August 2017, a local vision in the Jewish cemetery was carried out. Vision took a place without present of the witness. The LIDAR survey indicates numerous ground disturbances in the north- west and the southeast of the cemetery plot (GPS: N51°08.104′ E 022°50.441′).

No GPR survey were conducted. 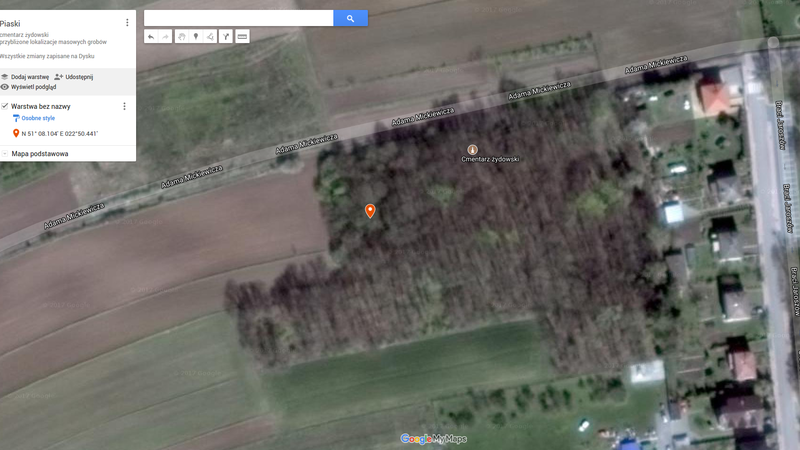 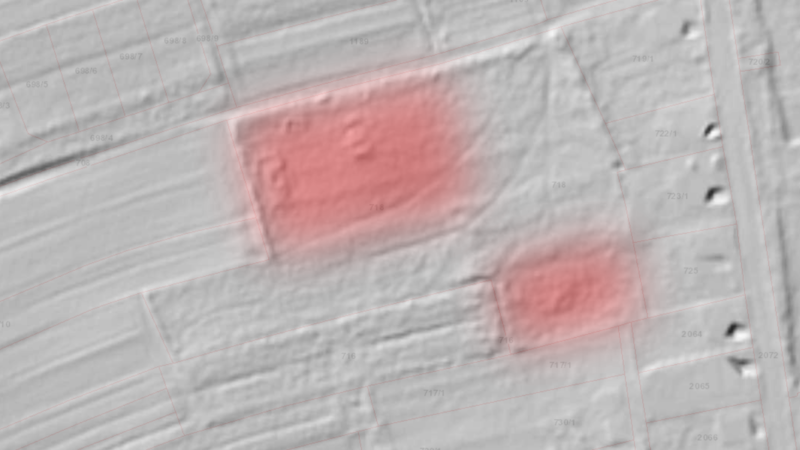 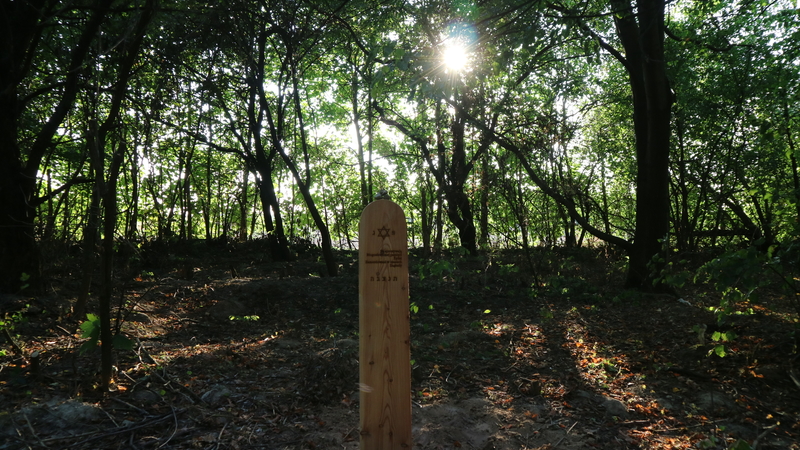 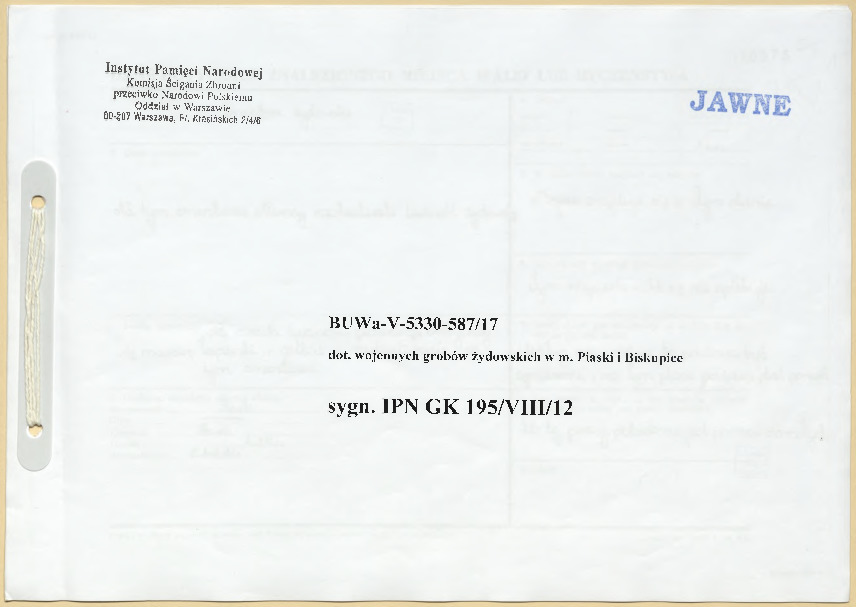 We are still looking for information on the identity of the victims and the location of Jewish graves in Piaski. If you know something more, write to us at the following address: fundacjazapomniane@gmail.com.

IPN Bu 2448/578, part 7, Repression of the Jewish population before the creation of the ghetto.