In November 2015 we received an email report about an unmarked Jewish grave in Ostrówek Węgrowski from a resident of this town who knows about the graves place from his grandmother. The grave of 11 Jews murdered at the end of the war is to be located on the edge of the forest, now on the private property. From the documents obtained from the resources of the Institute of National Remembrance, we know that in the Autumn of 1942 all Jews from Ostrówek, men, women and children, were gathered in the square near the factory and shot. (IPN BU 2448/1060)

During the site inspection in Ostrówek Węgrowski in March 2018, we recorded and eyewitness account of the murder of several people:

„ There was a terrible shooting on this road. The Germans, oh, my God, the Germans… And men run away from them along this wide road, in such a way to avoid them, to avoid the bullets. Anyway… I caught the child and ran home to my mother. Later, after a while I came back, these Germans were gone, we went there and we saw two girls lying, already killed, these boys probably escaped somewhere further… I came home, my husband just arrived from work, and he said that Germans are killing Jews.

– And how many people were there? How many Jews?

– Those who were killed here were two Jewish girls. One was my age, named Frejda, and the other one they called Rymarzówna [a daughter of a saddler], because her father was a saddler. And they buried them here, the owners fled from this house there, and that’s it. In a few days I went to my mother again. And again, I see lots of Germans and they are shooting again. Oh, my God, I ran out to look, there were a lot of people. So, the Germans came, because he [the farmer who hid the Jews] made a hiding place for the Jews, under the basement. And they lived there. But you know how the Jews are, they were curious, and I think someone tracked them down and betrayed them. So the Germans came to kill them. These Jews did not want to leave this hideout, so the military policeman went to get P. to go inside and drag the Jews out of there. The Germans were afraid that maybe they might have weapons. And this poor man went there, he was afraid, but he went in and dragged these Jews out. He dragged them on that hill, there were bushes there, and a sandy hill, and they killed and buried them there.

– And how many Jews were there?

– Five with these two?

– These two it’s a different story.

Moreover, a document from the resources of  the Chief Commission for the Examination of German Crimes in Poland contains the following information, that: „In the years 1940-44, the German military police that stationed in Budziska regularly carried out actions against Polish citizens of Jewish nationality in the form of deportations to the extermination camp in Treblinka, shootings, etc. […] A Jewish family was shot, which was hiding in the buildings of Witold P. Another time, Jewish people were shot next to Maria Z.’s house. The victims were, among others: Tołwina with her child, Josek Blum, Raichert Lanfer. (IPN Bu 2448/1065). There is no information about the burial place.

On March 20, 2018, site inspections were carried out in two locations indicated as places of mass graves. The first location (GPS: N52°32.873′ E021°46.753′) was marked out as the area where the mass grave of five victims is to be. Young trees grow in this place, which would make the collection and interpretation of GPR data difficult. If the location is not precisely indicated, the LiDAR survey will not be helpful either. The aerial photography query for this area wasn’t ordered. The GPR surveys are planned for 2021.

The second location (GPS: N52°33.039′ E021°46.508′) is a large wooded area where the grave of two victims (women) is to be located. The area is characterized by sandy hills, which makes the LiDAR interpretation very difficult. The marked area is too big to attempt to find the exact location of a grave of such a small size. In this case, GPR research will not be conducted. Aerial photography query for this area wasn’t ordered. 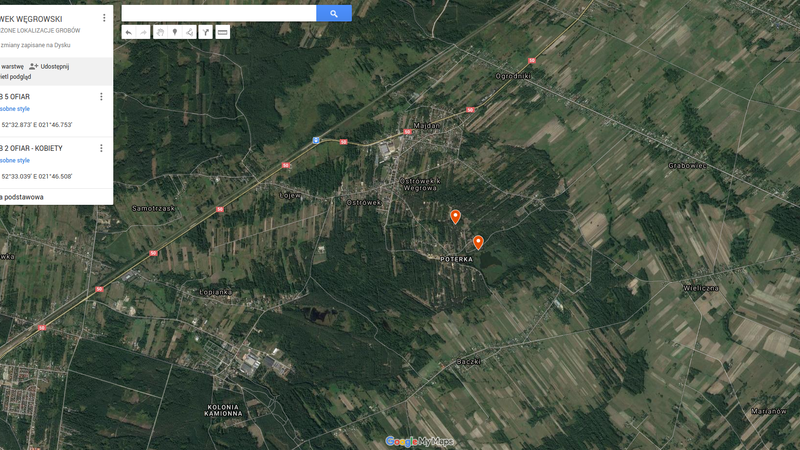 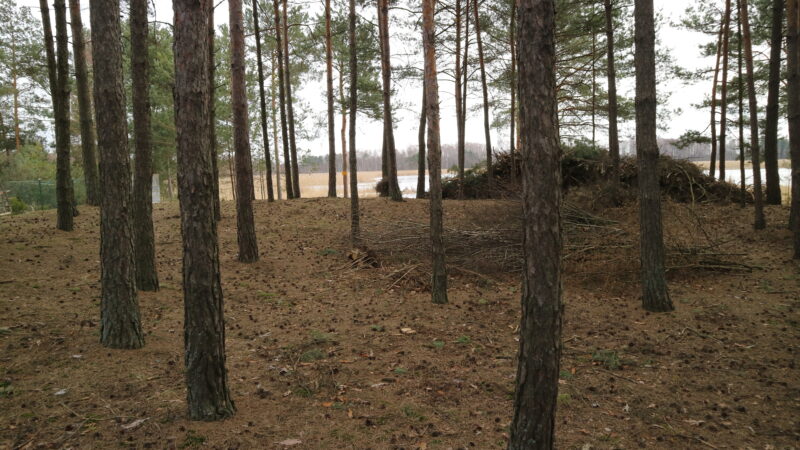 We are still looking for information on the identity of the victims and the location of Jewish graves in Ostrówek Węgrowski. If you know something more, write to us at the following address: fundacjazapomniane@gmail.com.