The forest area, sheltered by a sand dune.

In Olszewnica Nowa there is a burial place of 120 people murdered by the German military police on August 15, 1942. The victims were Jews and Romani people (about 60 Romani people), men, women and children. The victims were brought to the place of execution from Fort III in Pomiechówek and shot. Determining the exact location of the grave was possible thanks to an eyewitness to the crime. The witness also remembered the glow visible in the place where the personal belongings taken from the victims before their death were burnt. (gazetapowiatowa.pl accessed December 30, 2021).

Zuzanna L.: “The carts went towards the forest. We clearly heard screams and the lamentation. [..] Later it turned out that the Jews hidden in straw on carts were brought from the camp in Pomiechów and burned alive with the straw. […] In the afternoon, the burnt corpses began to be transferred to the pit that had formed there after the explosion of a bomb. The Germans ordered a few old people from Olszewnica and Krubin to transport the bodies in carts and bury them in the pit. There was a rumor that when the pit was filled in, the earth was moving because not all of the victims were dead.” (Nasza gmina, No. 5, May 2001)

Stanisław T. remembers the prisoners who came to Olszewnica: “They were exhausted, even battered, many crawled.” Stanisław remembers shots that were heard from the forest. He was at the place of burial: “Afterwards, we went looking for this place. I remember that there was a huge pit, about 3 meters in diameter. Older people told us that not all the victims were killed with bullets, some of them were buried alive.” (Testimony of Stanisław T.)

The place of the grave was marked with a wooden matzevah in 2021 as part of the project  “Reference points  – marking 25 Jewish war graves with wooden matzevot ”. The project is an attempt to find a way of marking the grave sites before they can be commemorated. Marking forgotten Jewish war graves with wooden matzevot is a subtle  intervention in the landscape reminding about what remains invisible, yet present in the memory of local communities. Being only a temporary commemoration, wooden matzevot invite local communities to discuss and take action, to discover the places, and perhaps to start their own memory practice related to them or to initiate a permanent commemoration.

On: August 11, 2020, September 7, 2020, and November 15, 2021, site inspections of the site precisely indicated by the witness were carried out (Annex 1 – photo of location 1). According to the witness, this location is the site of the genocide committed against the Romani and Jewish people (GPS: N 52 ° 25.786’E 020 ° 50.268 ‘). The burial site is in a forest area sheltered by a sand dune on all sides. It is also a well-communicated location through direct access to two roads running right next to the indicated area, which suggests that this location was pragmatically selected for the execution (Annex 2 of the LiDAR – the image of the relief). The sandy ground in the indicated area has probably been disturbed in the past, as evidenced by two distinct depressions visible in the field. The sinkholes in this place confirm that the ground has been disturbed, which caused the collapse of the grave. Such traces in the topography of the area are left by mass graves. In addition, soil disturbances may have arisen at a later date due to possible searches of graves for valuables belonging to the victims. During the site inspection on 7 September, 2021, GPR research was carried out (MALA RAMAC X3M – 500 Mhz). GPR surveys were carried out in two areas, area 1 – ONO1 / ONO2 Echograms, and area 2 – ONO3 / ONO4. Area 1 with dimensions of approx. 3.5 – 4.0 m by approx. 10.0 m, including both depressions, and area 2 with dimensions of approx. 2.6 m by 5.0 m. Both areas were delineated and tested in two axes. In the longitudinal axis, the GPR profiles in area 1 amounted to 16.2 m, in the width axis – 6.0 m, in area 2, in the longitudinal axis, the profiles were 10.0 m, and in the width axis – 6.0 m. The penetration depth is approx. 3.0 m below the sea level (60 ns). The echograms showed anomalies in both of the examined areas. The larger sets of anomalies are listed in the table below. 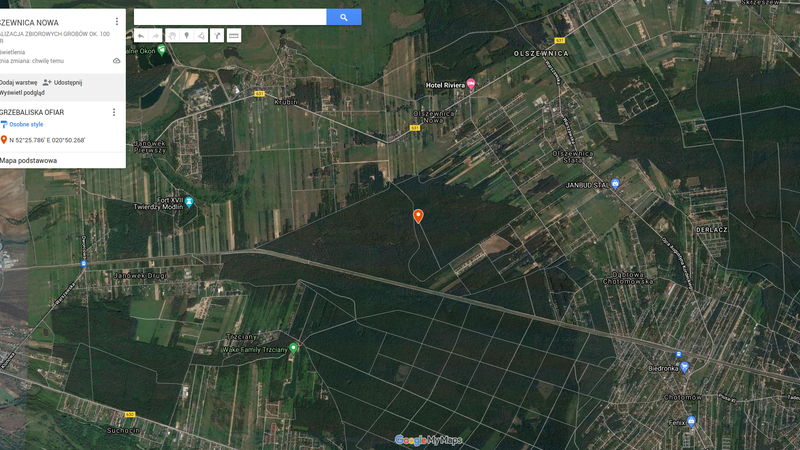 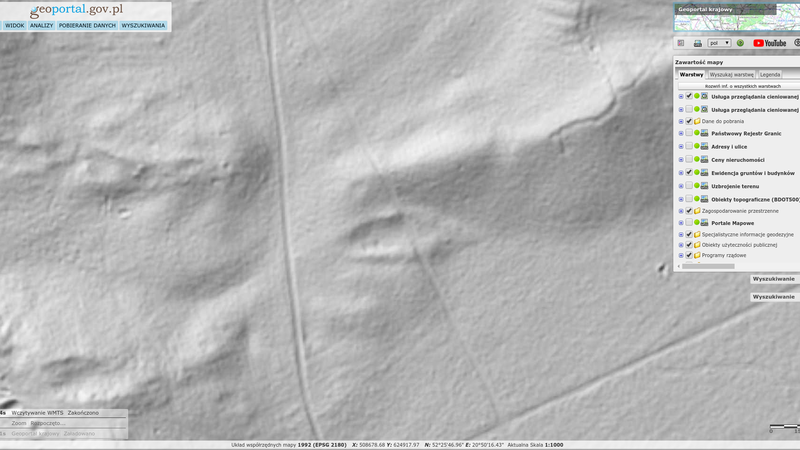 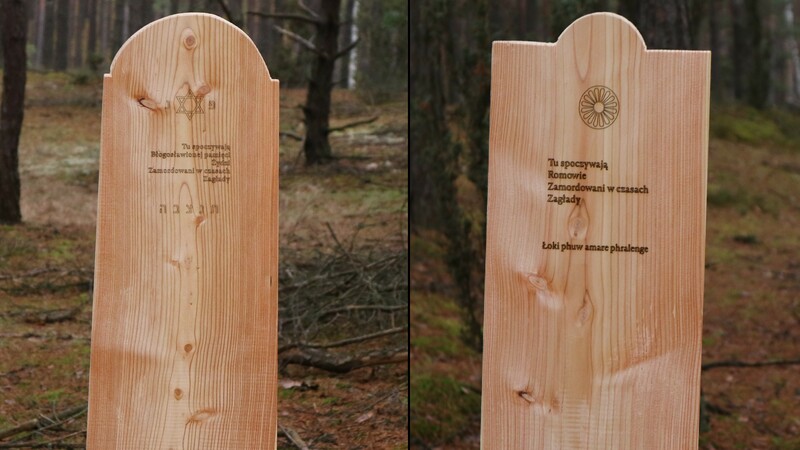 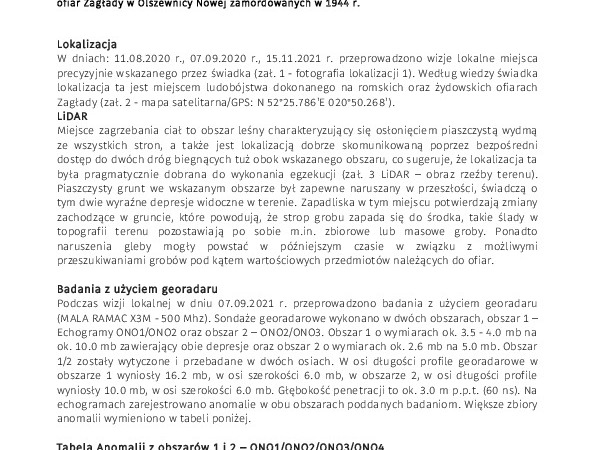 We are still looking for information on the identity of the victims and the location of Jewish graves in Olszewnica Nowa If you know something more, write to us at the following address: fundacjazapomniane@gmail.com.

The Register of Killing Sites and Crimes committed by the Germans in Poland between 1939 and 1945; the capital city of Warsaw, Olszewnica Nowa, Skrzeszew borough.

Nasza gmina, magazine no. 5, May 2001; memories of Zuzanna Liwska

The testimony of Mr. Stanisław Trzaskoma, resident of Olszewnica Nowa, written in the presence of the head of the Wieliszew borough, Mr. Paweł Kownacki and Mr. Artur Sierawski.