one person from the Margulis family.

In a yard, next to the then fire station. A forest behind the forester’s lodge.

The largest murder of the members of the local community took place on 4 January 1943. 56 people were killed then, including 32 Jews. Zygmunt Wach from Nielisz, who was a 5-year-old child at that time, recalls that day: “There were several Jewish families settled in the village. They worked as small merchants and craftspeople. All of them were killed – adults and children. Some of them were shot by the Germans near the fire station and buried there. A group of Jews hid in the forest, somewhere behind the forester’s lodge (they lived in a dug-out.) Someone pointed the Germans towards their hideout. They were shot next to this dug-out and buried in it.” (http://horajec.republika.pl/fakt4.html).

Meanwhile, in the archives of the Institute of National Remembrance there is no information about a grave near the fire station. Information about the Jews murdered on that day in Nielisz and buried in several common graves in the forest has been confirmed though. (IPN GK 163/19)

A resident of Nielisz (born in 1928) recalls a Jewish family he calls “Herszki”: “In Nielisz they killed the Herszki. They were [they lived] on Marcowa Street but apparently, they were taken from their house. The house is not there anymore. They were shot in the yard. I don’t know where they were buried. […] They were older Jews, they had lemonade.” (Nielisz, 5 May 2015.) Maybe this person meant Hersz Krampf and his wife Sura. Both of them were over 60 when they died.

The same witness remembers the discovery of a Jewish hideout in the nearby forest. Maybe they mean the same event described also by Zygmunt Wach: “The other [Jews] were [killed] in the forest, there… But there is a road towards the so-called forester’s lodge. And to the right there is a turn and an old tree and then there is a young… it was young at that time… copse. Now the copse is large. And from that road to the right… where a hollow is, I’m not sure. There is a ditch and a hill which is quite steep and next to the hill there was a dug-out where Jews were hiding. I don’t know how many of them. Someone must have disclosed it, some Germans arrived, threw grenades into the dug-out. And it stayed like that. But whether those Jews were only from Nielisz, or whether from Michałów or Szczebrzeszyn, I don’t know. They stayed there for one winter. Yes, one winter.” (Nielisz, 5 May 2015.) 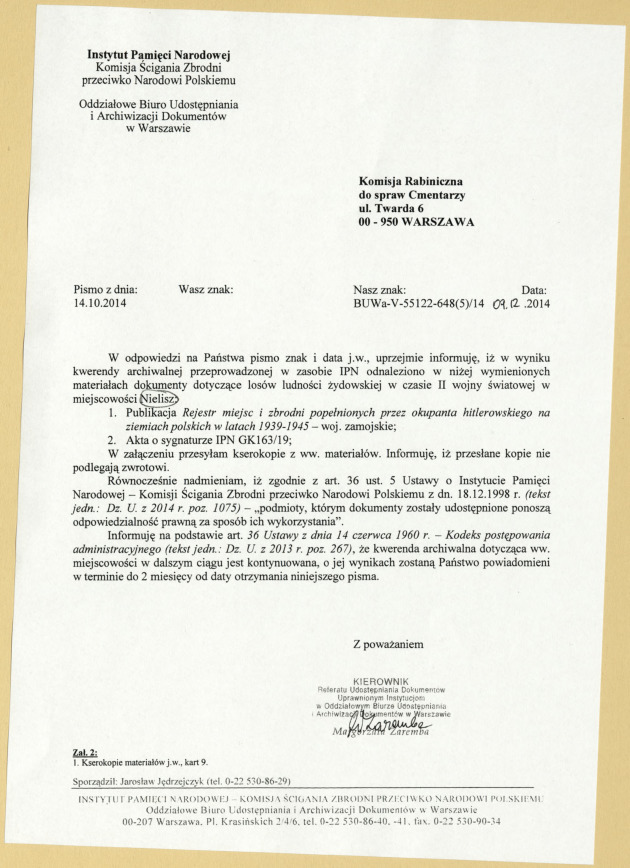 We are still looking for information on the identity of the victims and the location of Jewish graves in Nielisz. If you know something more, write to us at the following address: fundacjazapomniane@gmail.com.

Recording of the Zapomniane Foundation (audio file), name: – [witness to the story], b. 1928, place of residence: Nielisz, subject and keywords: Jewish graves in Nielisz, interviewed by Agnieszka Nieradko, Nielisz, 5 May 2015.

IPN Lu 327/6 part. 1, Files in the case: Wyłupek Jan accused of murdering Jewish citizens during the German occupation of the Nielisz commune and acting to the detriment of persons of Polish and Jewish nationality.