Abraham Borgerg (born 1912 in Zambrzyce) was one of the Jews from Nowy Sącz region who survived the Holocaust. From his account recorded in 1969 we learn about the living conditions in Mszana Dolna during the war: „After the displacement from the neighboring towns, such as Dobra and Rabka, many Jews came to Mszana, even from Kraków and Nowy Targ. There were also women displaced from Łódź. There were about 1,000 Jews in Mszana Dolna at that time. […] There was an open ghetto in Mszana, it was only prohibited to walk in some streets. All young people were employed in various jobs in the quarries and on the roads. They were harassed, etc. Even 8-year-old children were forced to work.” (301/1692 The Jewish Historical Institute, Archives of Accounts)

This event is also described by Abraham Borger: „The first action in Mszana Dolna was on April 20, 1942, on Hitler’s birthday. The action was carried out in various towns, in Nowy Sącz and Limanowa. In Mszana Dolna, 10 people, including young girls and boys, were put up against the wall. A boy named Chaim Landau and two others managed to escape from there. After three days they were captured by the Germans. One of them was almost buried alive. It was a 16-year-old boy named Weber, a son of a rabbi. His own father was forced to bury him, because he was among those who dug graves. The boy shouted: „Tate, ich Lejb!”. He was only shot in his leg.” (301/1692 The Jewish Historical Institute, Archives of Accounts)

The bodies were taken to the Jewish cemetery in Mszana Dolna and buried there. The graves varied in size, they were dug on an ongoing basis, containing from 2 to 10 bodies. (IPN Gk 163/9)

Abraham Borger’s parents, Róża and Lipman Borgers, as well as his only brother Bernard died in this execution. „The general liquidation action took place in 1942. On August 19, they gathered all Jews on the market square. Out of all these people, about one hundred were selected to work, and 10 people to clean up the things that belonged to the murdered people, as it turned out later. I was among these ten. The rest were shot and buried in Mszana Dolna. 881 people were shot. After the war we built a memorial on that grave, to commemorate these people. […] Just 10 Jews were left out of the entire population. We were cleaning up the things of the murdered. This was my fate, that the things of my parents and my brother, who also died there – I had to have them in my hands.” (301/1692 The Jewish Historical Institute, Archives of Accounts)

A shocking description of the murder of the Jewish population in Mszana Dolna can be found in the document with the reference number IPN Gk 195/VII/8 written by Józef Bieniek, a regionalist and historian of the Nowy Sącz region. (attached in the references – can be downloaded at the bottom of the page)

The place of the grave was marked with a wooden matzevah in 2020 as part of the project  “Reference points  – marking 24 Jewish war graves with wooden matzevot ”. The project is an attempt to find a way of marking these places before they can be commemorated. Marking forgotten Jewish war graves with wooden matzevot is a subtle  intervention in the landscape reminding about what remains invisible, yet present in the memory of local communities. Being only a temporary commemoration, wooden matzevot invite local communities to discuss and take action, to discover the places, and perhaps to start their own memory practice related to them or to initiate a permanent commemoration.

On March 28, 2019 a site inspection was carried out at the Jewish cemetery (N 49°39.893′ E 020°03.871′) in order to determine the location of the mass graves. Due to the lack of witnesses it was not possible to precisely indicate the location for GPR research.

As a result of archival aerial query, a picture of this area was obtained (TUGX913 frame 395/1942 or 1944). The aerial photography shows the area of the Jewish cemetery and the dirt road running along the northern border. A ground disturbance is visible clearly from the west and slightly less visible from the north. Aerial photography query for this area is still ongoing in order to obtain better quality photos.

The LiDAR survey shows ground disturbances in the western and northern parts of the cemetery. 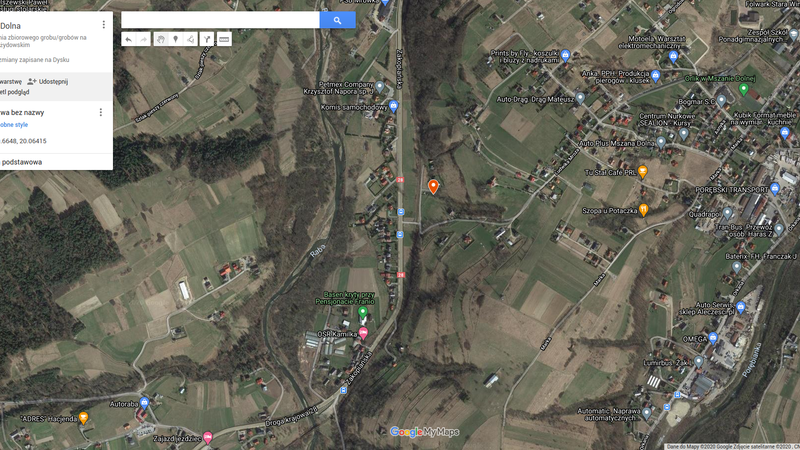 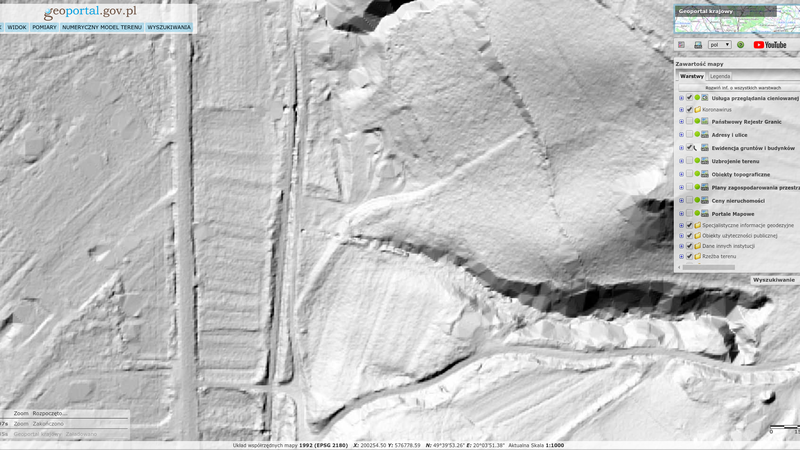 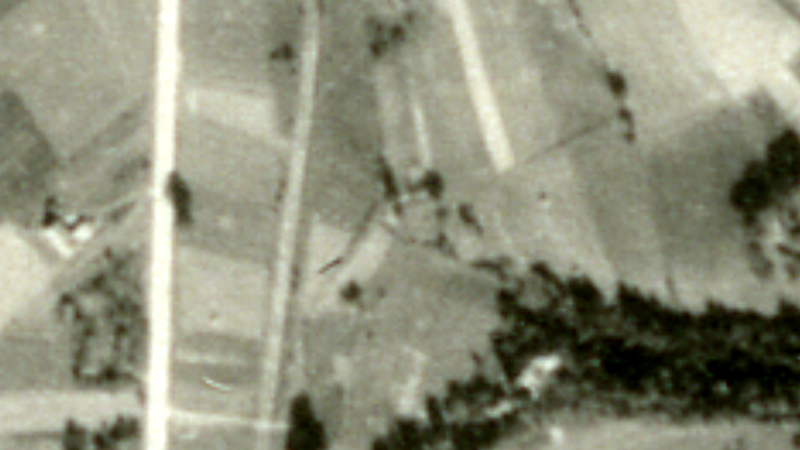 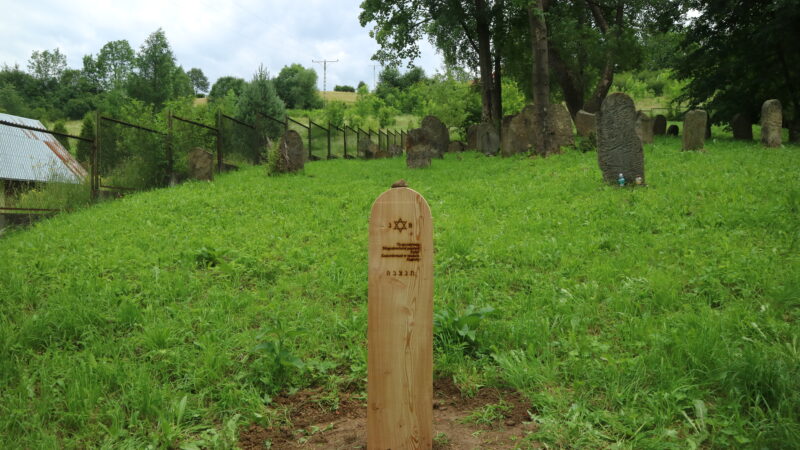 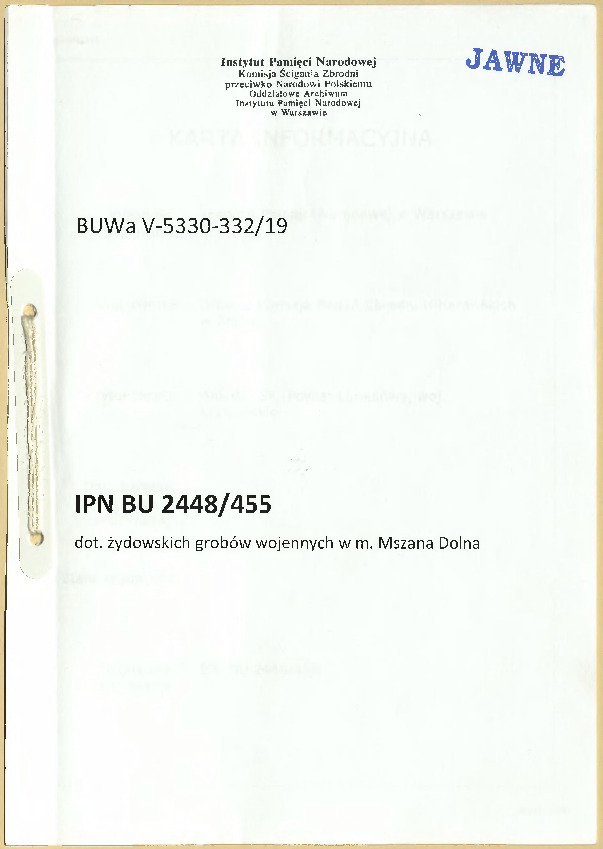 We are still looking for information on the identity of the victims and the location of Jewish graves in Mszana Dolna. If you know something more, write to us at the following address: fundacjazapomniane@gmail.com.