According to the Register of Sites and Crimes, on 20 July 1941 in Mściwuje military police officers shot 900 people of Jewish nationality brought there from Stawiski (Rejestr., p. 146.) On 13 July 1971 the Białystok Regional Commission for the Examination of German Crimes in Poland started an investigation of crimes commited on the Jewish population from  Stawiski, Kolno District in 1941 (S 25/67.)
Residents of Mściwuje testified during the investigation.

Wacław K.: “Upon taking over the area of Białystok Voivodship in 1941 Germans started the extermination the Jewish population in the vicinity of our village. It took place on 20 July 1941. Shootings lasted for about a week […] and took place on a field between hills that allowed to see further. There were anti-tank ditches dug few years later by the Soviet authorities. […] As far as I know, Jews were first brought to the school in the village of Kąty and then from the school to the place of execution. They came from Kolno, Stawiska, Mały Płock, Rutka, Skroda and other villages. Bodies of the murdered people were initially covered with sand by the Germans. Later they designated farmers from our village to do this job.” (S 25/67 vol. I p. 4-5)

Feliks C: “It took place towards the end of July 1941. I noticed some German soldiers with skull emblems on their hats bringing Jewish people – men, women and children – to Jan M.’s field where during the Soviet rule anti-tank ditches had been dug. I was about 300 metres away from there. I heard singular and automatic gunshots and I saw how just after an arrival of one vehicle full of Jews further ones were arriving. I know that they were murdering Jews because my neighbours recognised their Jewish friends when cars were passing through our village. Executions lasted several days. After some time, Germans ordered the mayor to designate people to bury the bodies. I was one of them. At the crime scene the bodies were covered with a very thin layer of soil. In ditches and on the ground I saw puddles of blood which had already been soaking into the soil, and human remains. […] In 1944 a German unit took out the bodies of the murdered people and burned them.” (S 25/67 vol. I p. 6-7)

Marian R.: “Around 1700 Jews used to live in Stawiski. One day in July 1941 the German military policemen gathered all the Jews on the square. It was early in the morning. Men as well as women and children were there. Most of them, mostly young men and women, were put in a column and rushed in the direction of Mały Płock. Later I learned that they had been shot near the village of Mściwuje.” (S 25/67 vol. I p. 21-22)

Fajgel G. from Stawiska, the Holocaust survior, testified in 1946 in front of the Jewish Historical Commission in Białystok: “On 15 July 1941 in Stawiski Germans rushed all the Jews to the street. They chose the young ones and rushed them to Kąty (in the direction of Nowogród) from where they were taken to Mściwuje in vehicles. There were anti-tank trenches dug by the Soviets – 6 metres deep, 2 metres wide and 15 metres long. [The Jews] were shot to death there with automatic guns.” (Machcewicz, Persak, 2002)

According to a resident of Mściwuje (born in 1942) whose account we recorded on 14 August 2017, the bodies of murdered Jews were destroyed: “They’d been bringing them for two weeks in cars – and killing them straight away. Germans surrounded [the whole area] and brought them [Jews] from Stawiski, Mały Płock, Kolno and Łomża. They were coming with their belongings. They were told that  they would working. A few days later a military policeman from [Mały] Płock ordered the mayor to gather all farmers to bury them [the Jews.] There were anti-tank trenches [so deep] you wouldn’t see a man in it. The Russians dug them, they were getting ready for defence. There was the border between Dobry Las and Żelazne. The Germans on one side and the Russians on the other – and us on the Russian side. Coming back from Russia, [Germans] were trying to erase the traces of committed crimes– they would dig out corpses, cover them with tar and burn them. They didn’t manage to [destroy] one grave. There were several graves, they would put Jews in them like herrings. […] Apparently, one Jewish woman escaped through this ditch to the forest. They were shooting after her but missed.”

Currently the graves are commemorated with a monument that reads “Here lie ashes of thousands of victims of Nazis murdered in 1941-1943. Honour to their memory”. The area is cleared, its borders are marked with low white posts. A question remains whether all graves have been included in the commemoration.

No local vision was carried out. 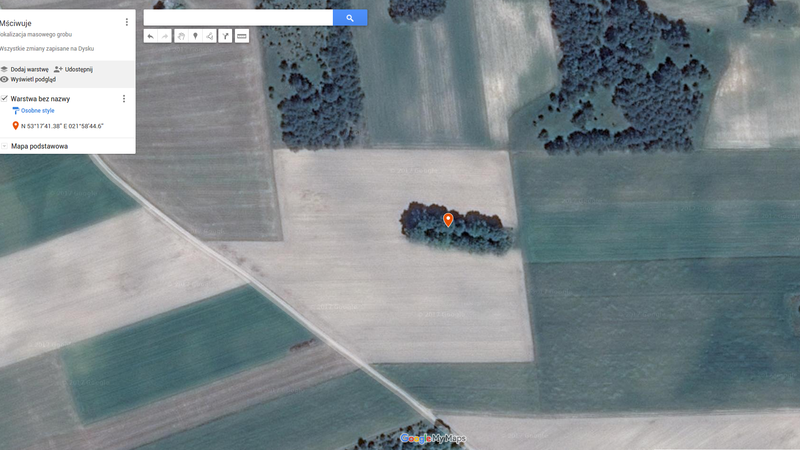 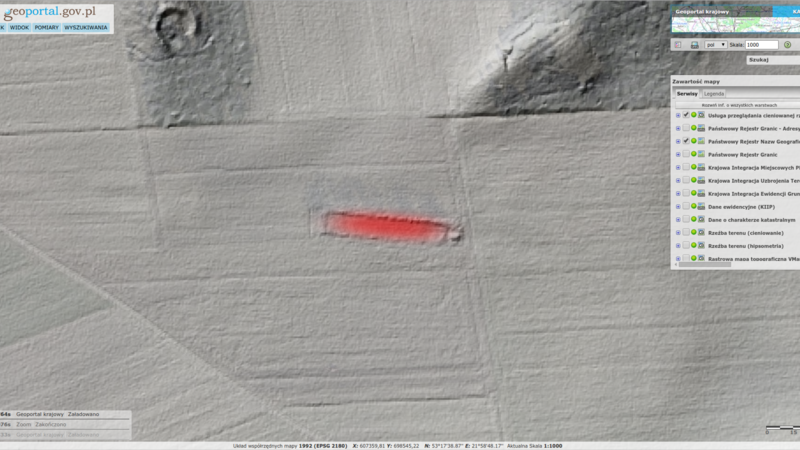 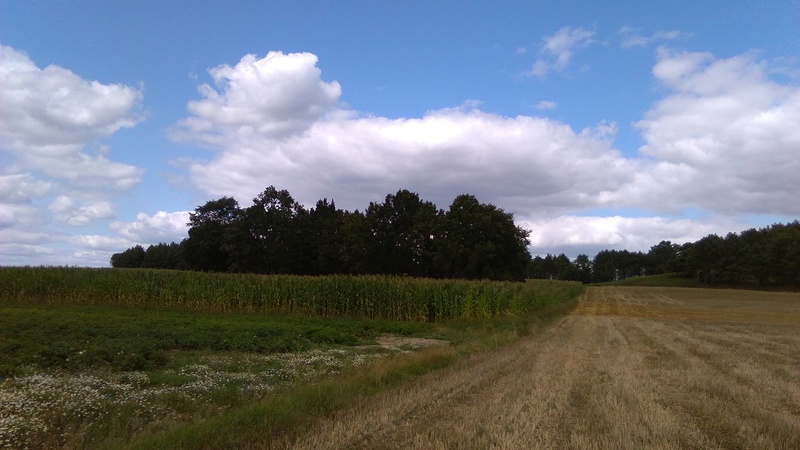 We are still looking for information on the identity of the victims and the location of Jewish graves in Mściwuje. If you know something more, write to us at the following address: fundacjazapomniane@gmail.com.