In a field, in a place called Olszynka.

The existence of a forgotten Jewish grave from the Holocaust in the Marcinów village was brought to our attention by a letter written on 1 September 2013 to the Jewish Religious Community in Warsaw. The author of the letter stated that “just before the bridge, several metres to the left if you’re going from Michów, Germans ordered to quickly dig a ditch and bury several Jews murdered earlier.” The murder was committed during the Operation Reinhardt in the spring 1942 while Germans were transporting Jews from the Lubelskie Voivodship to the death camps: “A long column of carts and pedestrians escorted by military police and blue police walked from Michów to Kurów and then to the train station in Nałęczów. Those Jews who couldn’t walk were killed by the Germans and the ‘blue’ and thrown on the cart with corpses. The procession went through the villages in the borough of Abramów”, including through Kolonia Marcinów.

As a result of a search query in the archives of the Institute of National Remembrance we managed to find documents confirming the fact that on 27 April 1942 in Marcinów (the borough of Wielkie, currently the borough of Abramów) military policemen shot to death 16 Jews from Michów. Their bodies were buried in a field, in a place called Olszynka, in a grave measuring 4 metres by 3 metres (IPN GK 196/322).

On the11th of June 2014 a GPR survey of the place indicated by the local residents was carried out(GPS: N51°28.024’E022°17.134′). The low quality of the survey result does not allow for accurate interpretation. Ground disturbance visible on echograms are not clear, despite this attempt to determine the size of the ground disturbance responsible for the mass grave in this location have been made. The approximate size is a length of approx. 3.5 m, width approx. 3.5 m. 2.0–2.5 m, depth approx. 0.8 m.

The LIDAR survey indicate the reduction of the terrain in this location. 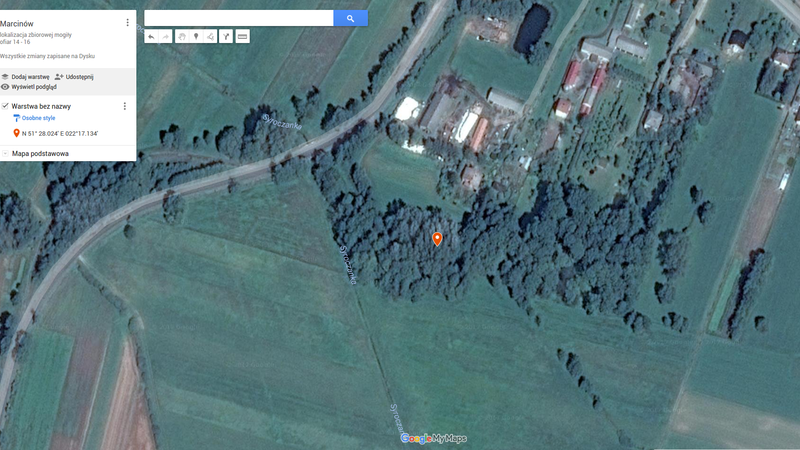 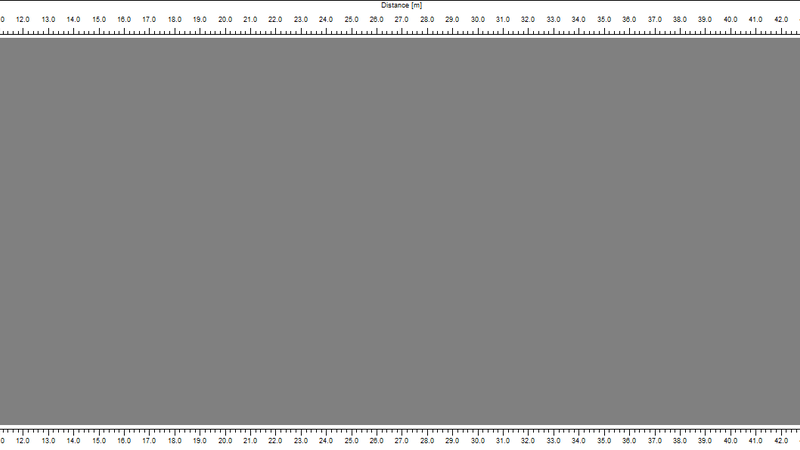 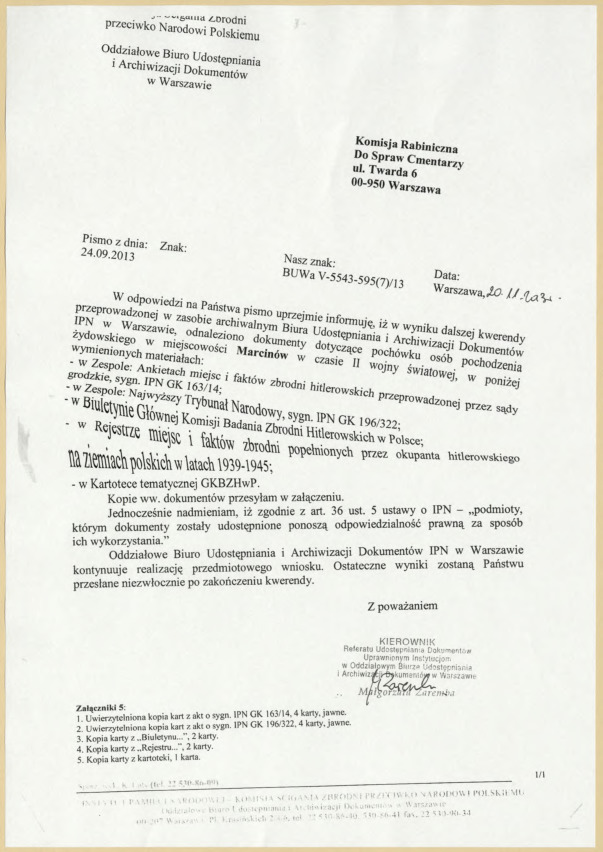 We are still looking for information on the identity of the victims and the location of Jewish graves in Marcinów. If you know something more, write to us at the following address: fundacjazapomniane@gmail.com.

IPN Lu 1/13/42, p. 13 and 13v, the former Regional Commission for the Examination of German Crimes in Lublin, Questionnaire of places and facts of German crimes, Lubartów district.

IPN Lu 284/761, vol. 2, the former Regional Commission for the Examination of German Crimes in Lublin. Crimes committed by the Germans in 1942-1943 against persons of Jewish nationality in Kolonia Marcinów, Lubartów district.

Newsletter of the Chief Commission for the Examination of German Crimes in Poland, IX, Warsaw: Wydawnictwo Prawnicze 1957, p. 202.

Extract from the file of the Chief Commission for the Examination of German Crimes in Poland.

A letter of 1 September 2013 addressed to Jewish Community in Warsaw by prof. Antoni on the Jewish grave in Marcinów.