Sand mine, meadows between ponds.

The ghetto in Maciejowice, in the Piaski district,  existed from mid-1940 until July 1941. Around 2,300 people were imprisoned there.

“There are several documented cases of brutal treatment of Jews captured outside the ghetto. The accounts of these events are shocking to this day. This is what happened. The Jews imprisoned in the ghetto suffered from unger. The Jewish tailor called Sztokci was returning from the village. Next to the wayside cross on Podzamecka street, he met a crippled German soldier. The German threw the tailor into a puddle (it was early spring), he was beating him and wanted to drown him. He failed so he rushed him towards the ghetto. He was kicking him and beating him with a rifle butt. The moans of the Jew “lured” the people. They watched the scene in silence. The Jew promised a buyback. The German agreed, took the money and shot the tailor in a meadow across the river. The body was buried by the Jews.” (IPN BU 2448/934 p. 6)

The documents collected by the Commission for the Prosecution of Crimes against the Polish Nation take note of the following events:

A man was shot in 1940: “Father of the Buchów family, shot while being transported to the ghetto in Maciejowice.” No information was given about where the man was from.

In November 1941, in the afternoon, German military policemen murdered a woman walking down Podzamecka Street. Ten-year-old Tadeusz Krupa (born on November 8, 1931) witnessed this event: “There were 14 Germans on bicycles, and the Jewish woman was walking down Podzamecka Street. They got off their bikes and recognized that she was a Jew. She was immediately killed. The boy only saw her falling to the ground, terrified by what he saw, he fled and hid behind the houses. He doesn’t know what happened to the body of this Jewish woman. ” (IPN BU 2448/936 p. 362)

In the autumn of 1942, the German military police murdered four Jewish children aged 8-10. “These children were looking for food, they wandered around the fields, collecting everything that they could eat. When they picked up potatoes, they tucked them under their clothes and went out on the road. They were halted by the gendarmerie patrol. The gendarmes ordered the children to empty their pockets and stand over the ditch. After a while, shots were fired and the dead children fell into the ditch.” (IPN BU 2448/934 p. 4)

Documents also record the murder of two Jewish women and one child staying outside the ghetto, in a grove by the road to the village of Polik. The date of the execution remains unknown, the bodies were left at the crime scene. The murdered women probably were daughters of a Jew named Josek.

There are two Jewish war graves with a pre-confirmed location in the territory of the borough of Maciejowice.

There is a grave of 53 Jews from Maciejowice, in Podzamcze, on the edge of a group of ponds. On the site of the execution, a local history enthusiast placed a cast-iron fence with the following description: “54 Polish citizens of Jewish origin were shot here in the fall of 1943. After the displacement of the Jewish population from Maciejowice, several dozen people of this nationality were hiding in the area. Over 26 Jews worked in the manor in Podzamcze. Those wandering gradually began to join those “legally” working in Podzamcze, seeing it as a chance to survive. For some time, the Germans didn’t seem to notice the growth of the group. One day they separated the workers from the “illegal ones”. They were shot to the head one by one. Two of them tried to escape – unsuccessfully. The bodies were thrown into the pit … The execution was carried out by four military policemen from Sobolew. The “legal workers” from Podzamcze were soon deported. Their fate remains unknown. Never again should a man do such a thing to a man!”

In 2018, we met Janusz Kostecki, who initiated the creation of the above-mentioned plaque. He knows the course of execution in Podzamcze from an eyewitness, Ryszard S.:

”They led them from the farm along the flood bank, set them one by one under the oak and ordered them to dig a hole in this place. He showed it to me, it’s from there all the way to some here, from 10 to 15 meters. There were two military policemen from Sobolew. Two [Jews] tried to escape. One ran in that direction. The military policeman shot him. This young forest wasn’t here at that time. And this is where he shot him. Another one ran in that direction, to the ponds, and was shot there. Two young Jews tried to escape. The remaining fifty-seven Jews are buried here. And the man who was watching, was standing right behind that oak. He saw it all clearly. […] He said that these people were of different age. They came here. When the Jews from Maciejowice were taken to Sobolew, and then transported to Treblinka, about twenty of them stayed here to work on the farm. Some of the Jews were hiding in the villages. They saw that people were working here and nothing was happening to them, so they kept coming. Others kept joining, until there were finally fifty seven of them. The Germans noticed that there were so many of them. The farm was managed by a German, the Zamojski family [the prewar owners] had nothing to say. They stayed in the summer palace, but were not allowed to enter the farm. The Jews were getting milk, potatoes and so on. Nothing more. Many Jews gathered there, so this German overseer called the military police in Sobolewo, they came here and executed those fifty-seven Jews, because that’s how many of them were here.

–      I will check. This can be checked. I don’t remember at the moment. If there were fifty-three of them, Rysiek S. surely said so. If I wrote that, it had to be so.

The second grave contains the remains of 20-30 people, residents of the Sobolewo ghetto who used to work in the Krępa manor. The grave is located at the back of the World War I cemetery, in the place where sand was mined before the war.

The place of the grave was marked with a wooden matzevah as part of the project “Reference points”. The project is an attempt to find a way to mark the grave sites before they can be commemorated. The action was aimed as an intervention in the landscape of these places, which would remind about what remains invisible, even if present in the memory of local communities. Being only a temporary commemoration, wooden matzevot invite local communities to discuss and take action, to discover the places, and perhaps to start their own memory practice related to them or to permanently commemorate them.

You can read more about the project here (English below): https://tinyurl.com/2p9ar52f

The project of marking graves with wooden matzevot has been carried out by the Zapomniane Foundation since 2017 in constant cooperation with The Matzevah Foundation.

On March 6th, 2018, a site inspection was carried out in the place indicated as the location of the mass grave of about 53 victims (GPS: N 51°42.330 ‘E 021°34.810’). The place is located about 130 meters from the road running from Maciejowice towards the village of Polik. The indicated area is characterized by a large depression measuring approx. 13 m by approx. 4.5 m. The LiDAR confirms the approximate dimension of depression. On November 11th, 2021, GPR survey was carried out in two areas (named MAC1 / MAC2) of the indicated place. The collected echograms were processed and interpreted. Numerous soil disturbances were recorded on the GPR profiles collected in the MAC1 area. 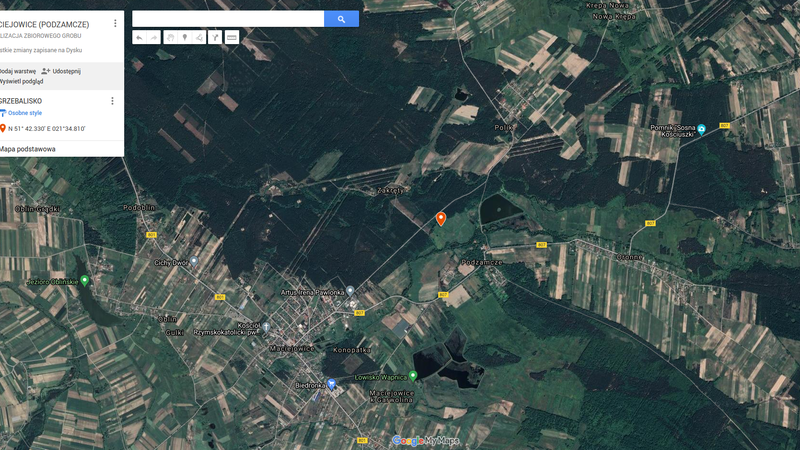 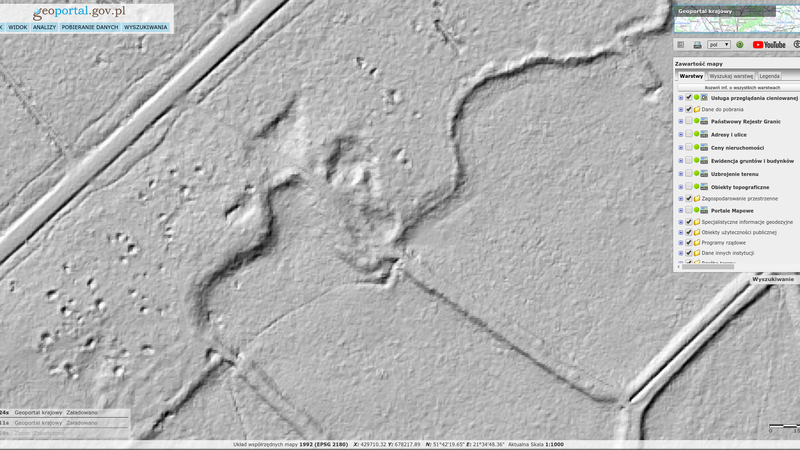 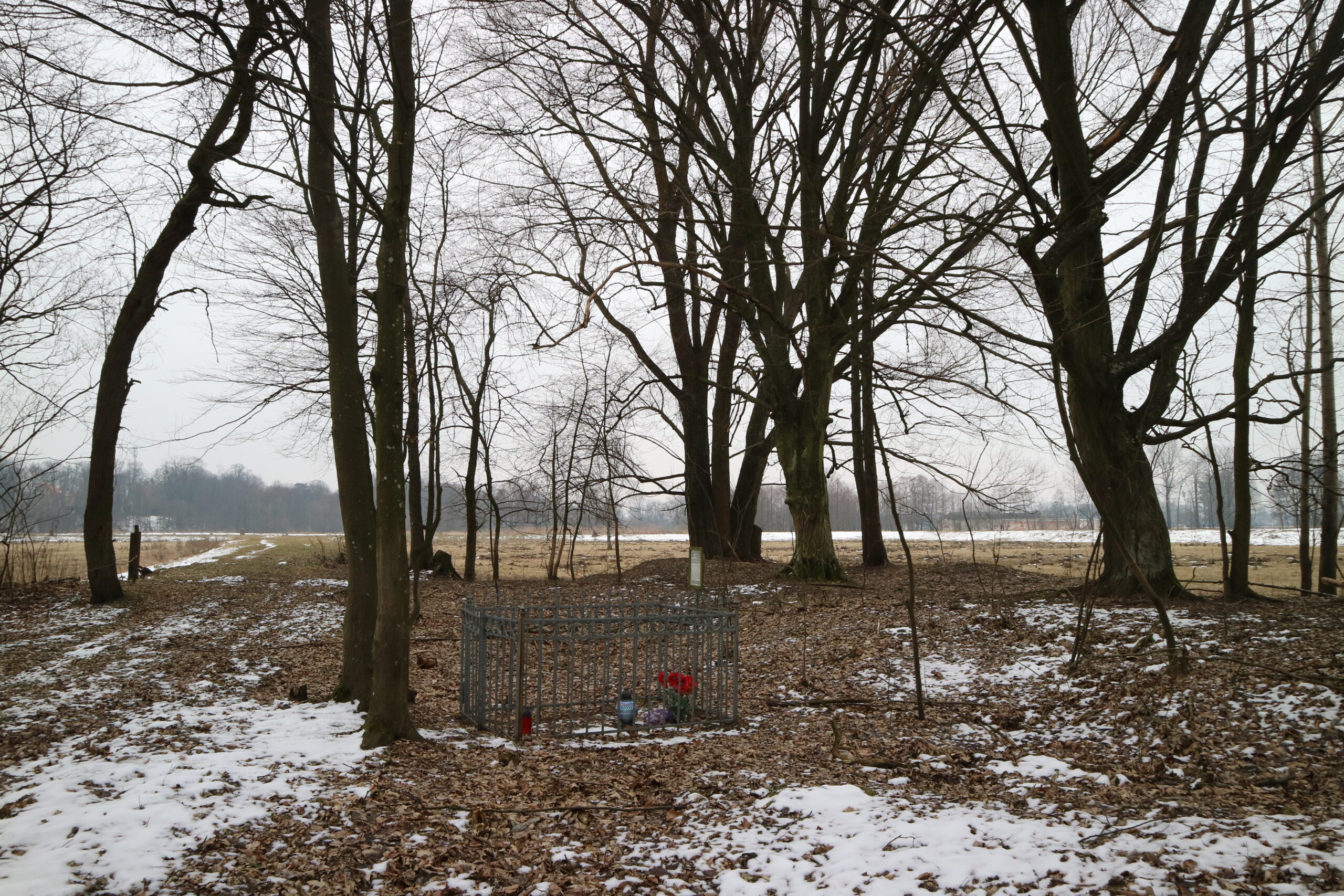 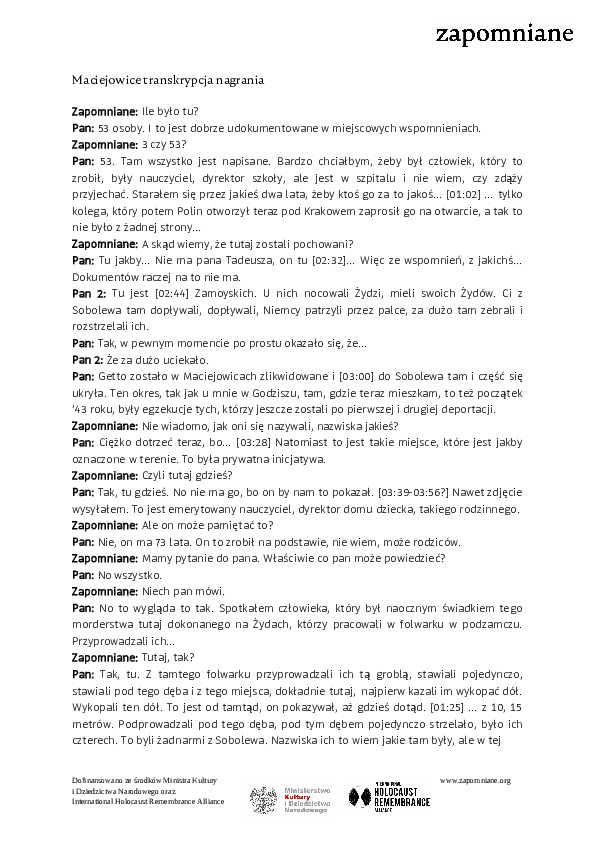 We are still looking for information on the identity of the victims and the location of Jewish graves in Maciejowice. If you know something more, write to us at the following address: fundacjazapomniane@gmail.com.

Kostecki W. “The fate of the Jews from Sobolew and Maciejowice during World War II” in the Historical Papers of Garwolin (Zeszyty Historyczne Ziemi Garwolińskie) No. 18, Garwolin 2012 pp. 65-71