The bodies were buried in the Jewish cemetery in Krościenko in one grave measuring 4x3m.

The same event is mentioned by the Holocaust survivor from Krościenko, Salomon Suskind: „On April, 28, 1942, the Gestapo from Zakopane unexpectedly appeared tracking the communists. They Killed 12 Jews, including a young girl. On the same day there was an action in Szczawnica, they murdered 9 people, and in Ochotnica – 11. The bodies of the victims from Szczawnica were buried together with the victims in Krościenko in one mass grave in the Jewish cemetery in Krościenko. Names of those murdered in Krościenko: Ryfcia Unterberger, aged 23, Buchman Mojżesz, aged 50, Form Hirsch, aged 73, Kaufmann from Gdynia, Mangel Michał, aged 27, Stotter Moritz, aged 70, Zehngut, aged 45, Unterberger Szaja, farmer, aged 47, Landau Leib, aged 60, Steiner Natan, aged 38, Buchsbaum Izak,aged 34, Szmerl, aged 28. (IPN Kr 1/936)

On August 28, 1942, 22 people from Krościenko were murdered in the town of Krośnica. The bodies were buried in two graves by the river (dimensions 6×2 and 2×2 m). Among the victims were:

Sperling, 82, whitesmith, and his wife

The wife of Shon

That is how Suskind remembered the liquidation of the Jewish community in Krościenko in the last days of August 1942: „August 30, 1942. The displacement from Krościenko. In the morning the Gestapo from Zakopane came. I was a messenger in the Polish community, I was on my way to work early in the morning and I was first that noticed that SS were breaking down the door of a family friend’s house. I ran home to warn my mother and sister (since the first action my father had not slept home, he was hiding in a peasant’s shed) but they did not manage to escape and my mother was shot outside of the house. My 19-year-old sister fainted at the sight of our mother’s body. The elders were caught (there was no youth, as they had been barracked in labor camps) and they shot them on the spot. They rounded up the escapees, drove their cars back and forth on the road to Nowy Targ, gathered the victims in a group and shot them near the forest in Krośnica. There were dead bodies all the way from Krościenko to Nowy Targ.” (IPN Kr 1/936)

On 1 October, 1945, A. Rudnicki, a judge, inspected the grave in the Jewish cemetery in Krościenko:

„In the cemetery in the place indicated by the gravedigger there are no signs that would determine the size of the grave. […] The gravedigger, Wojciech S. stated that he was present at the time of choosing the grave in which the Jews were later buried and that the grave measured 10×2 meters. The grave is located right at the entrance to the cemetery, on the left side, by the old wall.” (IPN Gk 163/10)

On this day died:

The family of Buchsbaum:

Blima Pasterer with her daughter and granddaughter

An unknown shoemaker from Chochołów and his wife

„In Krościenko, the Wildfener family, wife, husband and son were hiding among peasants. The peasants betrayed them and they were taken to the cemetery in Krościenko. A 14-year-old boy escaped. He was caught. He hit the face of the policeman, who was kicking and hitting him. The boy broke away and he fought a fight with these thugs until they beat him so much that he no longer had the power to defend himself. They dragged him half alive to the cemetery, where his parents’ bodies were already lying and shot him.The head of the village and the peasants from all over the town told me about the boy’s heroic deed.

A young woman Pasterer with her six-year-old daughter was hiding in the woods for several weeks. Once she went to the mountains to ask the peasant for bread. He welcomed her, told her to rest and he himself went for the policemen. She was taken with the child to the cemetery. The mother was shot and the child’s head was smashed against the cemetery wall.” (IPN Kr 1/936)

As a result of the aerial photography query, two archival photos were obtained with the reference number: GX12252 SK frame 84 and 85 taken on September 2, 1944. Aerial photos confirm numerous disturbances in the northern part of the cemetery, and also highlight the area indicated as the place of mass burials. In addition, there are clearly visible remains, probably of the former small building standing at the entrance gate.

GPR surveys of the indicated area confirm numerous ground disturbances. The designated GPR test zone, approx. 25.0 m long and approx. 7.70 m wide, contains a set of anomalies of various depths of approx. 1.0 – 1.5 m below ground level. The ground disturbances in this area are highly likely to be associated with mass burials of various formats. The presence of traditional burials in the study area cannot be ruled out either.

The LiDARsurvey clearly illustrates the steep slope of the cemetery and confirms numerous disturbances of the ground in the area indicated as the site of the mass graves. 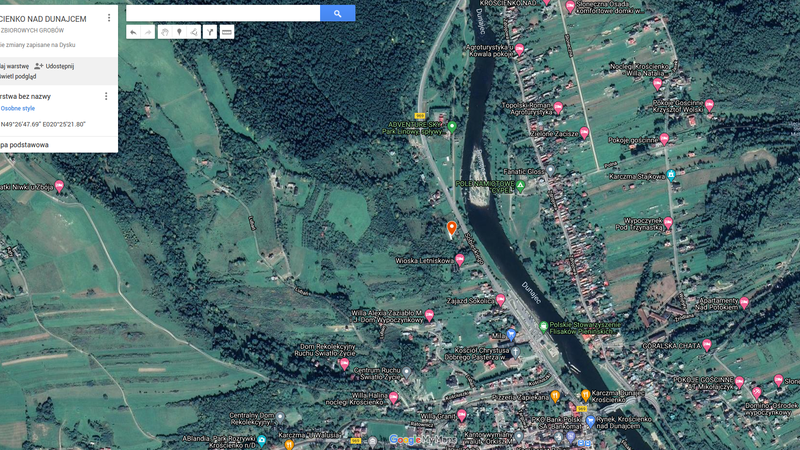 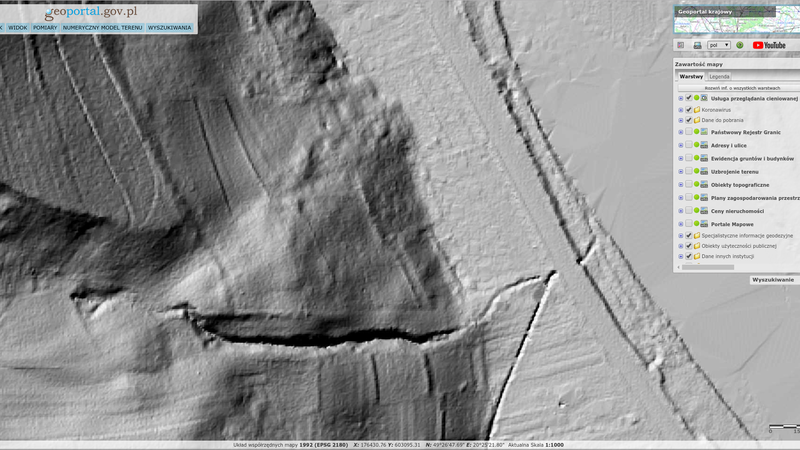 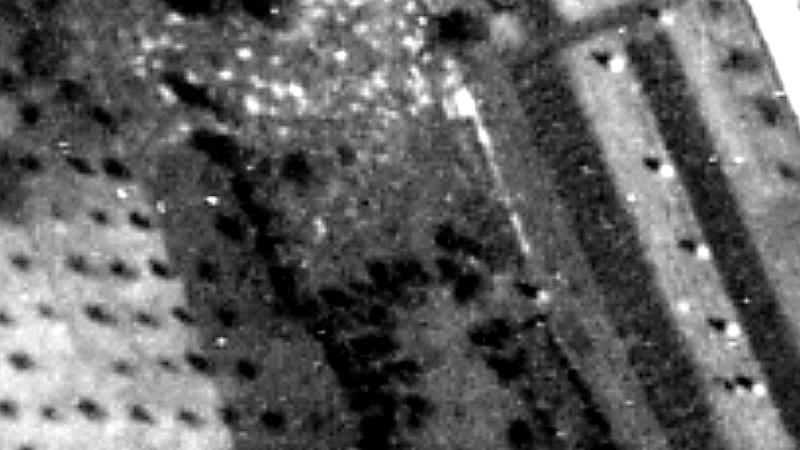 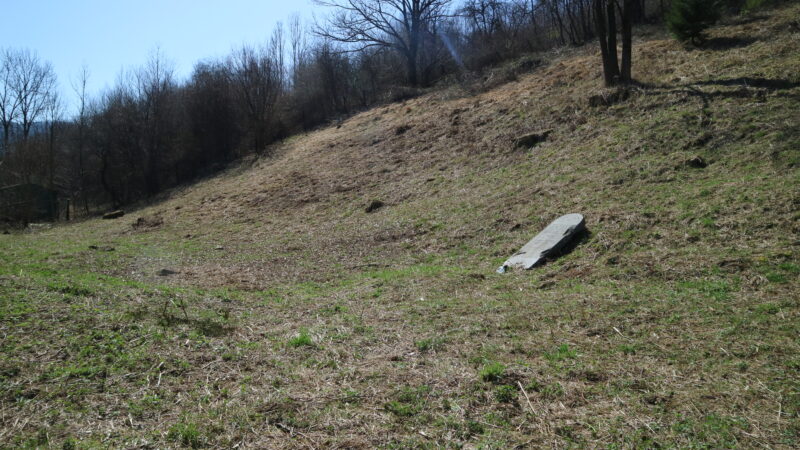 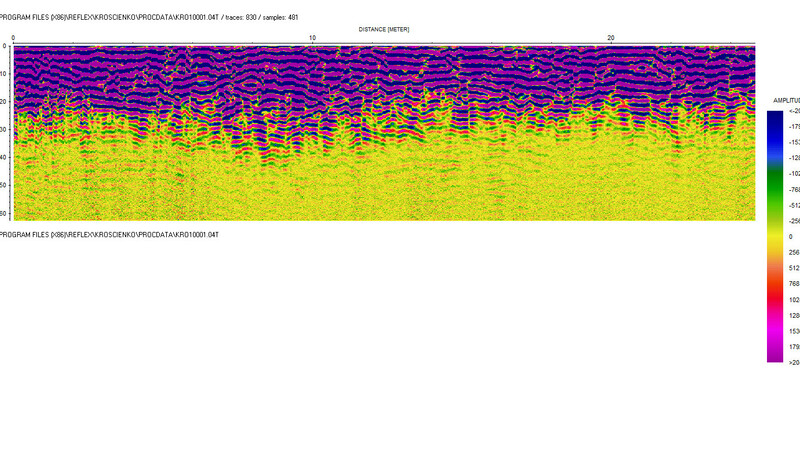 We are still looking for information on the identity of the victims and the location of Jewish graves in Krościenko. If you know something more, write to us at the following address: fundacjazapomniane@gmail.com.

Executions in the krakowskie voivodeship during the occupation in 1939-1945.

UW II 175 Survey on the course of warfare and the German occupation.

List of names of the residents of Krościenko murdered in the Holocaust. Prepared by the Centrum Foundation as part of the project: “People not numbers”.