Forest in Kąty across from the restaurant „Dwór u Antoniego”, at the roundabout at the junction of the national road no. 7 and the road leading to the Kąty village.

In May 2017, the Rabbinical Commission received the report about the possibility of a desecreation of an unmarked grave of the Holocaust victims in the borough of Orońsko in the Mazowieckie voivodeship. Intensive groundworks on the extension of the national road no. 7 were a threat to human remains. The gathered information showed that in the village of Krogulcza Sucha there is a grave of about 40 Jewish women and children murdered in the early 1940s and buried in a mass grave in the Kąty forest. Local residents commemorated the supposed grave site by hanging a cross on a tree. In July 2017 the site inspection was carried out by the representatives of the Rabbinical Commission and the GDDAKiA in Kielce during which three anomalies were found directly next to the tree on which the cross was hanging.

The query at the Institute of National Remembrance for the town of Krogulcza Sucha gave a negative result. Nevertheless, we carried out another query for the village of Młodocin, both the first report and the subsequent findings concern the area between the villages of Krogulcza Sucha and Młodocin. As a result, we found out that 12 Jews from Szydłowiec were murdered in Młodocin in May 1943. The victims were buried in the place of the execution. According to the questionnaire on executions and mass graves of October 8, 1945, the grave of 12 people was to be located in a forest belonging to the former property of Orońsko and it specifies that among the murdered there were 4 people catched in the forest and 8 people brought from Szydłowiec. They were also buried this way, in two separate graves. Neither the inquiries at the Institute of National Remembrance nor the State Archives in Radom confirmed the murder and burial of 40 women and chidren in the area of the grave.

The alleged place of the grave was marked with field stones by the contractor of construction works and with a wooden matzevah by the Zapomniane Foundation. A cross that was placed there by locals still hangs on the tree.

On June 13, 2017 a site inspection was carried out to determine the location of the grave of 20-40 victims. A precise indication was not possible due to the lack of witnesses. The area where the grave may be located has been marked out (GPS:N 51°19.940′ E 021°01.075′). The designated area is close to a newly built roundabout which may interfere with the grave.

The LIDAR survey shows many disturbed places that could potentially be a mass grave.

The GPR surveys are planned for autumn 2020. 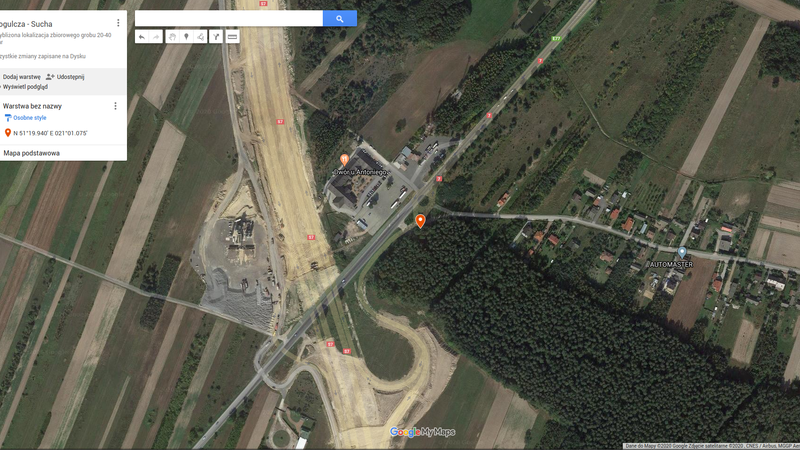 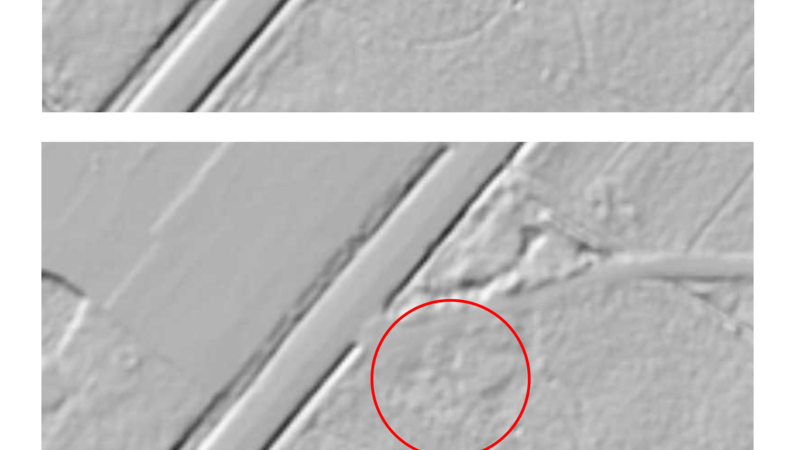 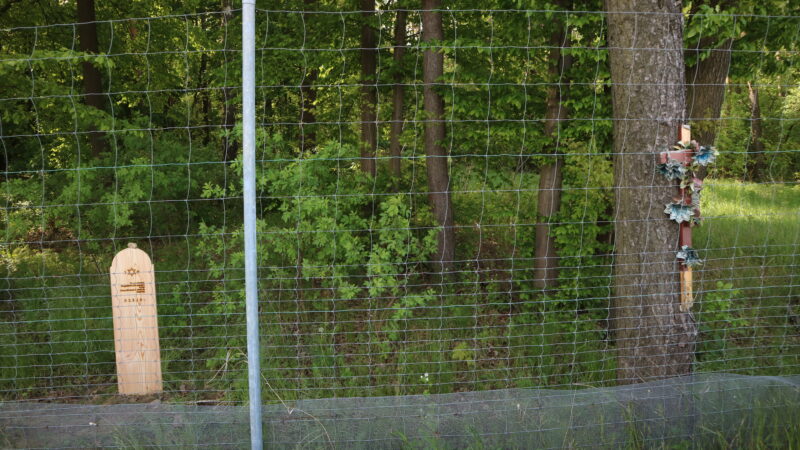 We are still looking for information on the identity of the victims and the location of Jewish graves in Krogulca Sucha/Młodociny. If you know something more, write to us at the following address: fundacjazapomniane@gmail.com.