The forest in Karmanowice, known as the Twisted Forest (a grave of approximately 13 people)

Numerous witnesses interviewed by the District Commission for the Investigation of the Nazi Crimes in the course of an investigation conducted in 1966 in Lublin, spoke about mass burials of Jews in the forest in Karmanowice. One of them stated: “I remember Germans bringing Jews from various places to the train station in Nałęczów. From there we took them to Opole Lubelskie, guarded by Germans. On the way Germans, who were part of the Gestapo, were killing Jews: children and elders. Also, they brought Jews to Karmanowice and killed them in the nearby forest. Many Jews were killed in the forest near Karmanowice.” (IPN LU 284/389, t. 1) The register of people murdered during the Nazi occupation in the Puławy District, created in July 1969 by the District Headquarters of the Citizens’ Militia and passed on to the Commission in Lublin, mentions even 4000 Jews exploited for building railway tracks in the nearby Łopatki and murdered when they were no longer fit for work. Some of them were buried in the mass graves in the forest near Karmanowice. (IPN Lu 504/13)

Thanks to the citizens of Karmanowice, in the summer 2017 we managed to get to one of the Jewish graves in the Karmanowice forest. According to the citizens’ accounts, several people rest there. A grave of several Jews murdered in 1943 in Karmanowice is mentioned in a memo written in May 1966 by the then chairman of the Commission in Lublin. Also “Alert Harcerski” mentions the murder of 13 Jews by Germans among four “places where crimes were committed during the war” (IPN Gk 195/VIII/17). The site of burial is known to local residents – they call this part of the forest “twisted”. In the summer of 2017 during the site inspection we met a citizen of Karmanowice who after the war, as a girl scout, was keeping vigil at the still unmarked grave.

The ghetto in Wąwolnica was closed down in March/April 1942. Some people were sent to workcamps in the Lublin District, for example to Poniatowa, some ended up in ghettos in Opole Lubelskie, Kurów and Nałęczów, the rest was deported to the Nazi deathcamp in Bełżec.

Probably at that time a group of several (13-16) Jewish women and men was taken from the ghetto in Wąwolnica to work in the brickyard in Łopatki. Work in the brickyard was seasonal – it lasted from the time the ground frost disappeared in the spring till it came back in the autumn. Probably towards the end of summer or in the autumn of 1942 Germans rushed their Jewish workers to the forest between Łopatki and Karmanowice (the so-called Twisted Forest) and shot them to death.

According to the eyewitnesses’ accounts one of the Jewish women was wounded but survived. During the execution she covered a young boy with her own body – thanks to that the child also survived. The woman was from the Symuch family who owned a shop in Wąwolnica. After Germans left, the woman and the boy were meant to go towards Wąwolnica. Nothing is known about their fate.

A year later, on 21 June 2018, the grave was permanently commemorated and safeguarded. On that day a commemoration service and a prayer at the grave of the Holocaust victims were conducted in the Twisted Forest. The ceremony was co-organised by the Rabbinic Commission for the Cemeteries, the Matzevah Foundation, the “Well of Memory” Association, representatives of clergy, local authorities, citizens of Karmanowice as well as teachers and pupils of the primary school in Karmanowice which took the ceremony under its auspices. We hope that through this ceremony we managed to bring back the memory of those victims of the World War II who – until now – were nameless.

We would like to wholeheartedly thank the community of Karmanowice for their engagement, help and support:

Ms Marzena Wartacz-Zadora, the Headmistress of the Primary School in Karmanowice, teachers and students for their presence, engagement and touching speeches during the commemoration ceremony, Mr Marcin Łaguna, the mayor of Wąwolnica, Mr Robert Kałdonek, the mayor of Karmanowice, the citizens of Karmanowice and most of all, the owner of the property on which the grave is located.

We would like to thank the “Well of Memory” Association and Ms Joanna Świderska for their invaluable help.

The LIDAR survey indicates numerous ground changes in this location. 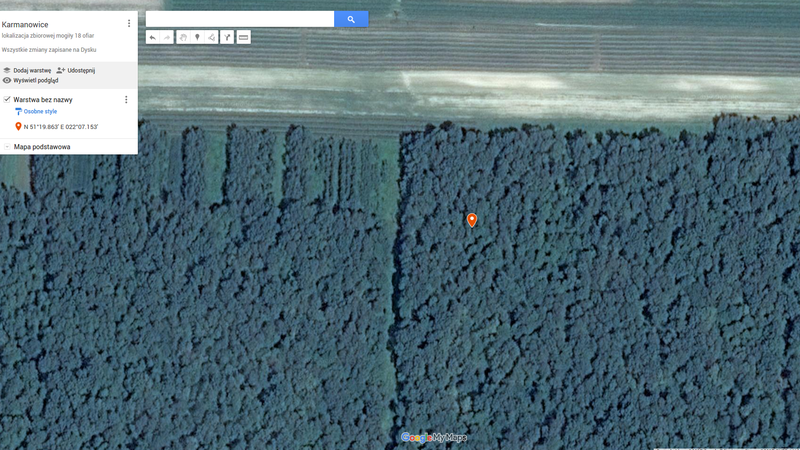 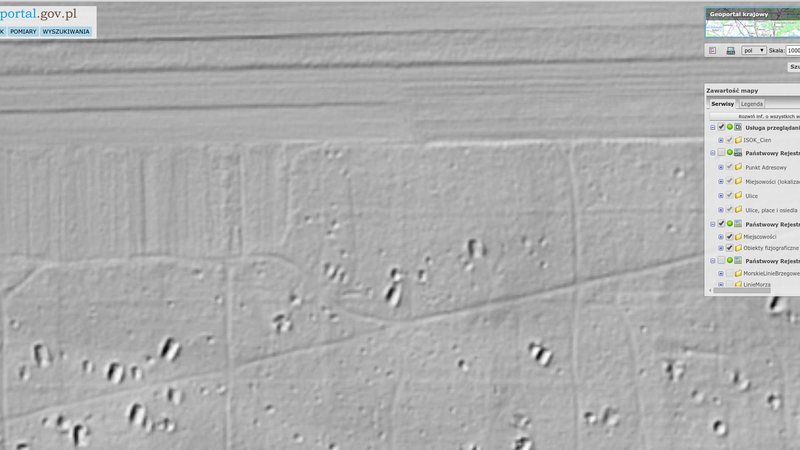 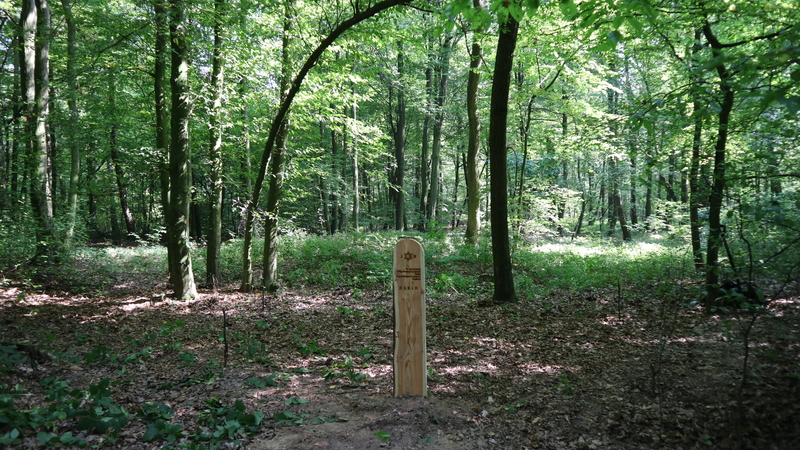 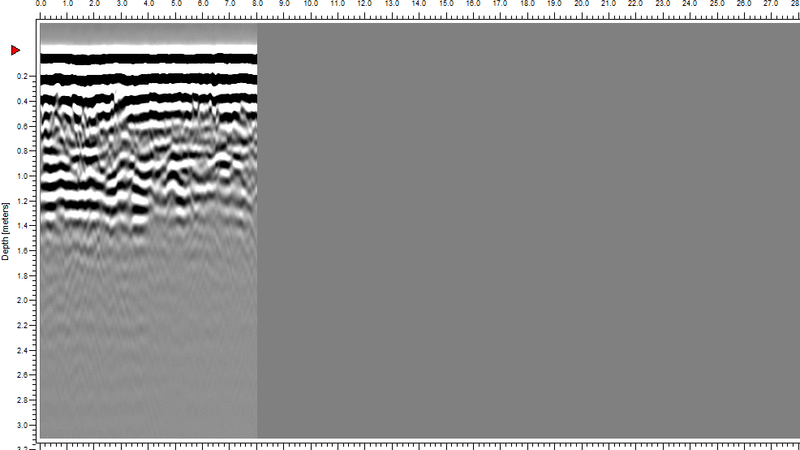 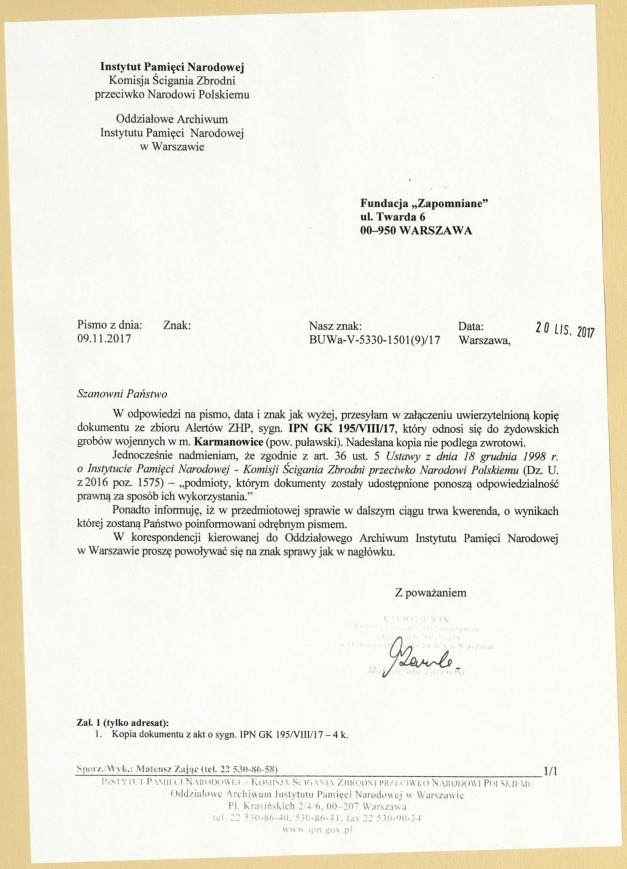 We are still looking for information on the identity of the victims and the location of Jewish graves in Karmanowice. If you know something more, write to us at the following address: fundacjazapomniane@gmail.com.

IPN Lu 504/13, Document regarding the town of Karmanowice from the List of people murdered during the German occupation, Puławy district.