The area of the sandpit in Grzybów, near the Palace Complex.

On 10 September 2014 we did a site inspection of the place where a grave of approx. 18 Jews from Staszów murdered in the autumn 1942 during the liquidation of the ghetto was meant to be located. 8 November 1942 has been remembered in Staszów as a “black Sunday.” On that day the ghetto in Staszów was liquidated and its residents evicted. One of the prisoners from the closed Jewish district in Staszów recalled this day: “At 5.30 am the horrible operation of the Holocaust in Staszów commenced. Jewish police, ordered by a well-trained murderer Schield, set off to inform all Jews they would need to gather on the town square by 8 am. The latecomers would be shot to death.” (Zarębski, 1992, p. 31). During our stay in Staszów in 2015 we managed to reach the residents who still remembered that terrible day.

Stefan T., a resident of Staszów, recalls: “Jews that I knew went – those who lived among Poles… Some of them stopped to say goodbye. It’s sad that a man can kill another man – an elder, a child… I looked at it with tears in my eyes. I had friends [among Jews], a cobbler, a tailor…” (Grzybów, 10 September 2014.)

On the same day Stefan T. gave a written testimony at the Town Hall in Staszów: “I declare that in the autumn 1942 I was a witness to a burial of 18 people – Jews from the ghetto in Staszów. The column of Jews was escorted by Ukrainians. The aforementioned 18 people, women and men, were buried in one grave in the village of Grzybów in a wasteland in the sandpit.”

Another resident of Grzybów, Stanisław (born in 1925) also told us about the grave in Grzybów: “There were only 3 Germans for the whole column [of escorted Jews] and they didn’t shoot but Ukrainians did when someone leaned out. A Jewish woman couldn’t hold [her children] straight and they leaned out and [the Ukrainians] – drunk like a skunk – started shooting without a word. Four carts were sent from Staszów to collect corpses. Anyone who leaned out was gone. The Ukrainians grabbed them by the legs and threw them on the cart. One of the carts wasn’t full but three were full of corpses! Filled to the brim with blood trickling. The carts went to Grzybów. They buried [the bodies] in the sandpit in Grzybów. Some bodies were deeper, others barely covered. Over 20 people, including children.” (Staszów, 6 July 2015.)

In a letter to the Chief Rabbi of Poland dated 1 June 2014, a resident of Staszów also points out the existence of unmarked graves of the Holocaust victims in Staszów: “[…] After the war, the area where those events took place [burying the bodies of Jews murdered during the walk from the ghetto in the direction of Szczucin] became a part of the Sulphur Chemical Plant ‘Siarkopol’ with headquarters in a locality within the Staszów District. The sulphur mine ‘Grzybów’ received a part of the property from the main company, including a property with an ID number 1332 and 71 in Grzybów which included the Palace Complex built in late 19th century by Maciej Radziwiłł. Jewish residents of the ghetto in Staszów, who in November 1942 were hurried through the road from Staszów to Szczucin, were shot and murdered on a mass scale during this walk. The bodies of murdered people were transported by carts and buried in a common grave near the aforementioned palace.”

The area where, according to the witnesses, the grave was meant to be located belongs now to the Forest Inspectorate in Staszów. Unfortunately, due to the exploitation of the area after the war (at first by drawing sand and then sulphur) the landscape has changed dramatically and the hill which was meant to contain the grave had been flattened.

During local visions carried out between 2014 and 2015, the place of the mass grave could not be precisely determined (GPS: N50°32.467′ E021°04.967′). The visions took place in the presence of a witness who indicated an approximate range (square in the size of about 50 m to about 50 m) of the location of the mass grave. The area is densely overgrown with planted trees, which make it difficult to accurately locate the grave with the help of a GPR. In addition, the environment of this location has changed many times, which make it impossible to find a place of the mass grave.

The LIDAR survey is not helpful with such a not precise indication. 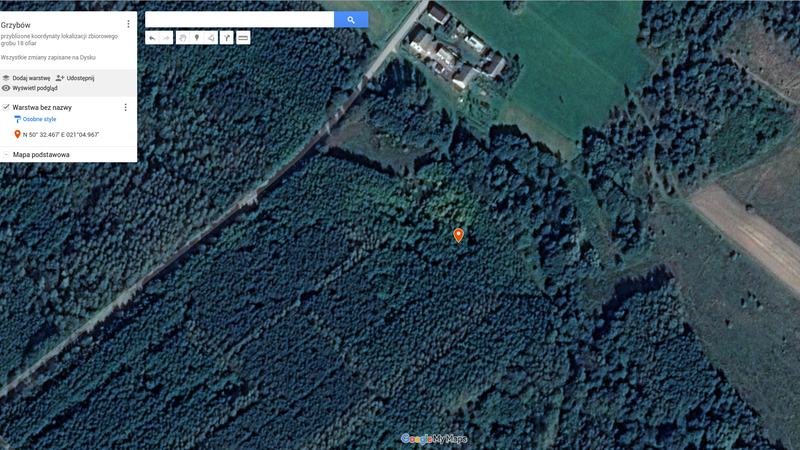 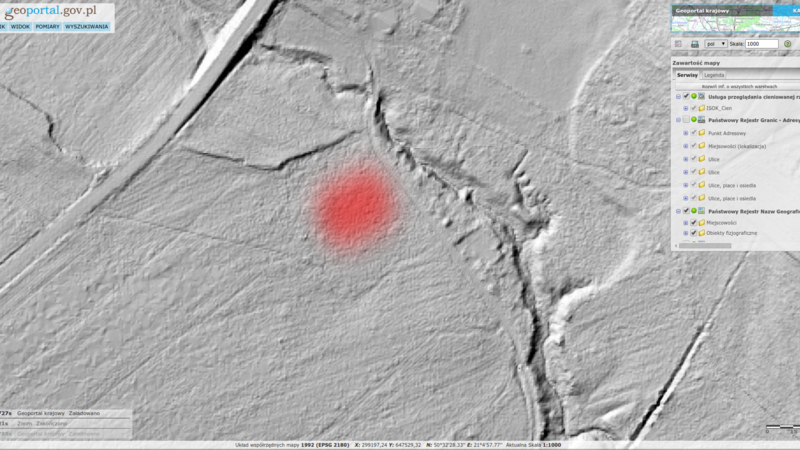 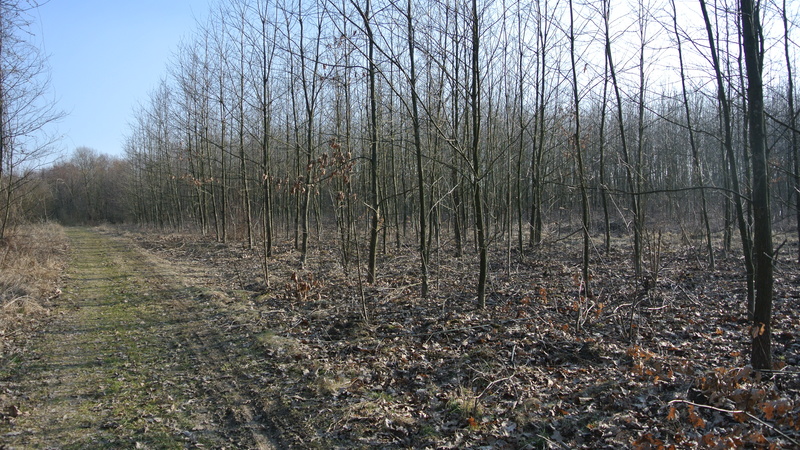 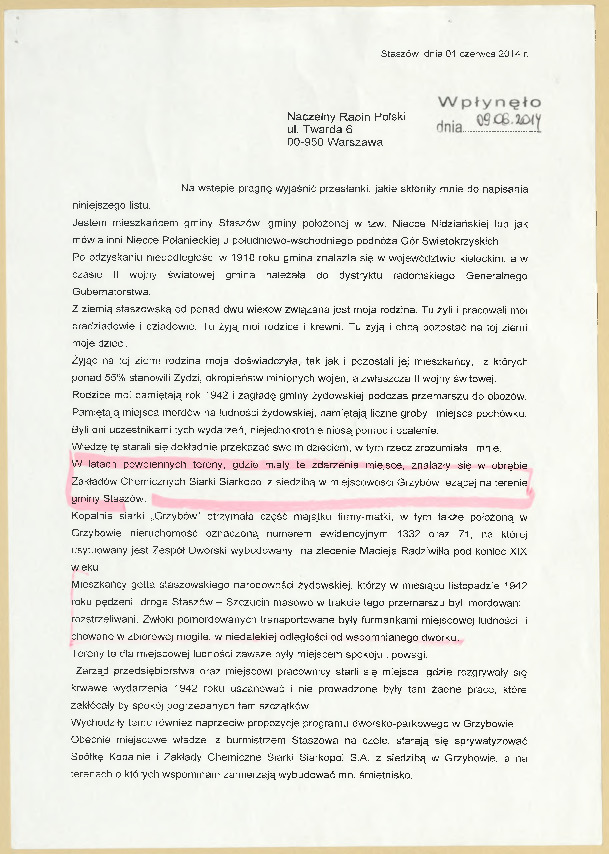 We are still looking for information on the identity of the victims and the location of Jewish graves in Grzybów. If you know something more, write to us at the following address: fundacjazapomniane@gmail.com.

Statement of Mr. Stefan submitted to the City and Commune Office in Staszów on 10 September 2014.