LIST OF VICTIMS
Inhabitants of Szczuczyn:
Dawid Jerszek aged 27
and a man aged 20

We know about the details of the murder of two men from Szczuczyn from the account of Stanisław K., who was hired as a carman at the German police station in Grabowo.

Stanisław K.: „I saw that military policemen had captured two Jewish men. One of these men was about 20, and the other one was 27. They came from Szczuczyn and were hiding in Truszki. Military policemen ordered the Jews to get in the cart and we returned to Grabowo. In the evening, when I was taking care of the horses, the commander came to the stable and ordered me to put two horses in the carriage in the evening, when it would be already dark. I followed the order and drove the carriage to the station. I saw that the military policemen moved the Jews out of the station and ordered them to get in the carriage, but under the seats, where the passengers usually keep their legs, and they took seats themselves. […] They ordered me to go in the direction of Łebki village, then they ordered me to stop the carriage about 300 meters from the forest. They ordered the Jews to get off the carriage and then led them inside the forest. I heard two shots and after about half an hour one of the policemen called me to come closer. It was dark in the woods. When the policeman ordered me to stop, I heard the sound of the shovels and rustling of the shoveled earth. […] Then the policemen thook their place on the carriage and we returned to Grabowo.” (statement of May 25, 1976, IPN Bi 1/2016 p. 4)

Piotr R., a resident of Grabowo, also witnessed taking the Jews to the forest.: „I don’t remember the exact date, I think it was in 1942. Military policemen from the police station in Grabowo murdered two Jewish men near the village of Łebki. I saw these men when the policemen led them out of the post and ordered them to get in the carriage. One of them was slightly older, the other was younger, about 20 years old. […] They went towards the villages Guty and Łebki. It was already evening. I heard – I don’t remember from whom – that the policemen took the mentioned Jews to the forest near Łebki and shot them there. However, I did not see the execution. (account of June 8, 1976, IPN Bi 1/2016 p. 17)

Technical documentation prepared in September 1971 by the Police District Headquarters in Kolno was added to the files of the investigation. It shows that the forest on the road from Grabowp to Łebki, in which two Jews of Szczuczyn were shot dead, belonged to Czesław Gutowski. The grave is located approximately 27 meters from the road. However, the precise location is currently unknown, although it was still possible to determine it in the 1970s. The documentation includes photos of the witness Stanisław K. taken in the forest during the site inspection of the killing and burial site. 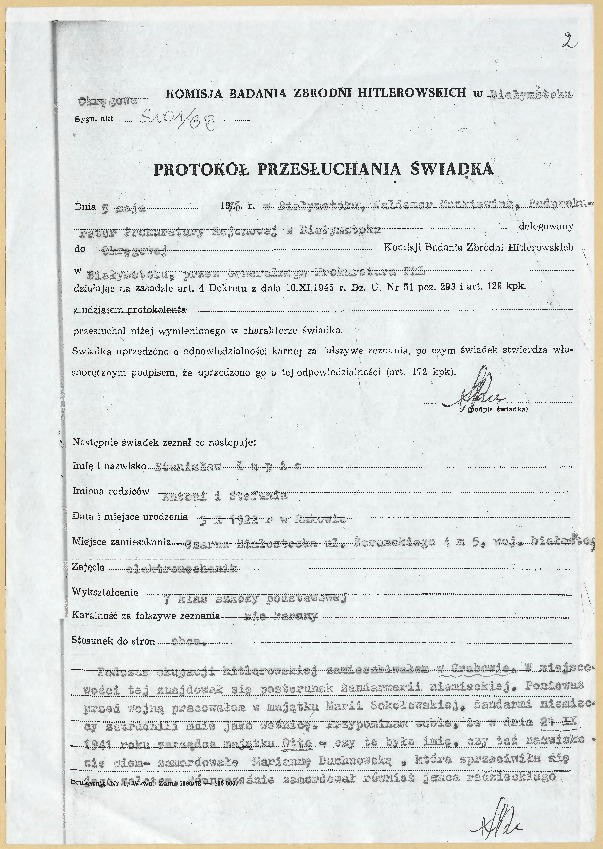 We are still looking for information on the identity of the victims and the location of Jewish graves in Grabowo. If you know something more, write to us at the following address: fundacjazapomniane@gmail.com.

We would like to thank the Conference on Jewish Material Claims Against Germany (Claims Conference) for funding the research project, thanks to which we obtained materials about this crime.