The Giełczyn Forest near Łomża is one of the largest Jewish killing site we have been investigating. Between July 1942 and September 1943 approx. seven thousand Jews from the ghetto in Łomża and surrounding villages were murdered there. Political prisoners from the prison in Łomża and the intellectuals were also killed Giełczyn. Altogether twelve thousand people lost their lives in this forest. Their graves were dug in the forest by the local residents. Germans also used the existing infrastructure – the remains of a Russian military camp which had existed there since September 1939. “There was a large military estate with extensive facilities. […] Dwellings and most of other infrastructure were reaching 1.5 metre underground. There were three deep wells made of pine wood.” (Sędziak Z., Las Giełczyński oskarża, [in]: “Ziemia łomżyńska”, Łomża 1987, p. 22. Further: Sędziak 1987.)

Currently in the Giełczyn Forest there are three monuments erected in different times but each of them is located in a place related to the genocide. There are still people living in Giełczyn who can talk about the murders committed in the nearby forest.

An account of a resident of Giełczyn (born in 1935): “You saw a concrete fence [a clearing at the edge of the forest] – in the four corners my brother, 10 years older than me, was digging graves. There are square ditches, 4 metres by 4 metres and 4 metres deep and in the middle there was another ditch, a 1 metre deep, to drain blood. It was like that. They were digging on Saturday but didn’t manage to finish. On Sunday morning the mayor came [and told them] to finish because on Monday they were meant to bring people to be shot there. It was in July, before the harvest. No one saw or hear when they were bringing [people.] They were coming from the road to Zambrów, not from Zawady. Most of them were Jewish. There was a ghetto in Łomża but they were bringing [people] from other places [to the ghetto]. There [in the Giełczyn Forest] are 12 thousand people.
Such a story was being told: a Jewish woman carrying a child was trying to bribe a German. He grabbed the child by the legs, hit him with a truncheon and threw him into the ditch in front of her eyes. Also, when they were covering [graves] with soil the soil was still moving.” (Giełczyn, 25 November 2015.)

“The crops were grown and it was warm. One afternoon the Germans arrived in a lorry and they told the mayor to gather 40 men with spades – I ended up among them. […] They took us to a clearing on the eastern edge of the forest. […] There they ordered us to dig three ditches 4 metres long, 4 metres wide and 4 metres deep. The middle of each the ditches had to be deepened for 1 additional metre. […] As some people counted, each of these ditches could fit about 900 people.” (Sędziak, 1987.) Currently there is a monument in this place, erected in 1963.

. Bronisław Ż.’s testimony: “During the Nazi occupation in September – but I don’t remember the year – I went to the forest in Giełczyn following an order of the German authorities. I was told to dig ditches together with other residents. We’d been digging those ditches for two days. We dug three ditches, each of them about 4 metres deep, 4 metres wide and 4 metres long.” (12 February 1966, p. 6.)

Józef, one of the oldest residents of Giełczyn: “It was 1941, they were bringing [them] in cars. Farmers from the village dug four ditches. And then they were bringing these people in cars and killing them. They were taking them out of the cars and prodding them with bayonets. They were reversing into to the pits and were pushing [people] directly into them. Many people suffocated because could they really shoot all of them?” (Giełczyn, 25 November 2015.)

Similar course of the event is recalled by Aleksander K., an eyewitness: “I saw lorries full of Jews arriving at the ditches dug before and reversing. Gestapo officers were ushering people into those ditches with truncheons. In the meantime, other Gestapo men shot Jews who were already in the ditch with machine guns.” (S 93/03/Zn, p. 14-15.)

Edward G. testifies: “Cars were reversing into the previously dug graves and the Gestapo was pushing Jews with truncheons straight into the graves, shooting them. There were also women and children. […] The place of execution was located at the edge of the forest near the road leading to the village of Giełczyn.” (S 93/03/Zn, p. 21.)

In 2015 the residents of Giełczyn also recalled that the victims of mass murders were buried not only in the previously dug ditches: “A regiment of the Russian army dug this deep well. Forty rings were underground. Apparently, the Germans [filled] this well with people but I didn’t see it.” “Have you seen this monument [from 1967]? The concrete is damaged there. And do you know why? I don’t know if it was 1918 or 1920 but an army was stationing there and a well with wooden rings was dug and they [the Germans] apparently were throwing [people] alive [into the well] and when they covered it with concrete, everything sunk and the concrete broke.” (Giełczyn, 25 November 2015.)

The same place was described by Zdzisław Sędziak in his article from 1987: ”There were numerous ditches and three deep wells filled with victims. Maybe the monument is located on the top of one of the mass graves, maybe even on the top of one of the wells which became a common grave. The indication could be the sinking of the previous concrete slab and denting of the current one. To the left of the monument [when facing it] a small dent in the shape of a wooden well can be clearly noticed. According to the witnesses’ testimonies, two wells were located in a close proximity to each other in this area and a third one slightly further towards the northern edge of the forest. These are however, the killing and burial sites of the Jewish population.” (Sędziak 1987.)

“In this forest there were three wells, as well as hollows. Both wells and hollows were filled with human corpses – I saw it with my own eyes. In the Giełczyn Forest there were also ditches – remains of bunkers. Those ditches were filled by the Germans with the corpses of murdered people.” (S 93/03/Zn, p. 2)

“In this forest there were various dens, hollows, trenches and craters.  The Germans buried bodies of the murdered people in those cavities.” (S 93/03/Zn, p. 78)

Residents of Giełczyn not only had to dig graves for the victims. The murder of several thousand Jews happened in front of their eyes: “You could hear single and serial shots coming from the forest. You could also hear screaming of people transported to be executed. It was coming from the cars driving through the road. It was a scream of despair.” (S 93/03/Zn, p. 82)

“I didn’t see the execution itself. After the Germans left, I went there. I found the ditches we had dug. They were covered with sand, levelled with the ground. Blood was seeping through the sand, creating a puddle on the surface.” (S 93/03/Zn, p. 56)

Towards the end of the war, when the Soviet army was approaching Łomża, the Germans started erasing the traces of their crimes: “With the front approaching, the Gestapo started bringing workers, i.e. forced labourers of Polish nationality. Later we saw fire columns coming from the area of the mass graves. A stench of burning bodies were coming from there. Then the cars came back empty – before that you could hear machine gunshots coming from the forest. It meant that the labourers used by the Gestapo to burn bodies were later shot by them and burned as well.” (S 93/03/Zn, p.15)

A resident of Giełczyn (born in 1935): “[…] They were bringing prisoners from Łomża and they were taking corpses from the ditches to the field and burning them there. This stench, this reek… I remember it to this day. It was 2.5 km as the crow flies from my place. When wind blew I could see it. They brought prisoners when they were burning bodies but in the evening those people who were forced to burn the bodies were also killed.” (Giełczyn, 25 November 2015.)

According to the Questionnaire of mass executions and mass graves, there are four graves in the Giełczyn Forest (4 by 4 metres each), two wells and several other hollows which numbers are difficult to establish. The questionnaire was created on 10 October 1945. (IPN Gk 163/2)

Residents’ accounts and historical documents indicate that the area in the middle of the forest was the place of the largest massacres and mass burials – the area of the monument from 1967 within the borders of the military camp abandoned by the Soviet army in 1941.

The location of the hearths where bodies of the victims were burned still has not been established – as well as what happened to the human ashes and how many unmarked places of burial of the victims of the crime are still in the Giełczyn Forest. 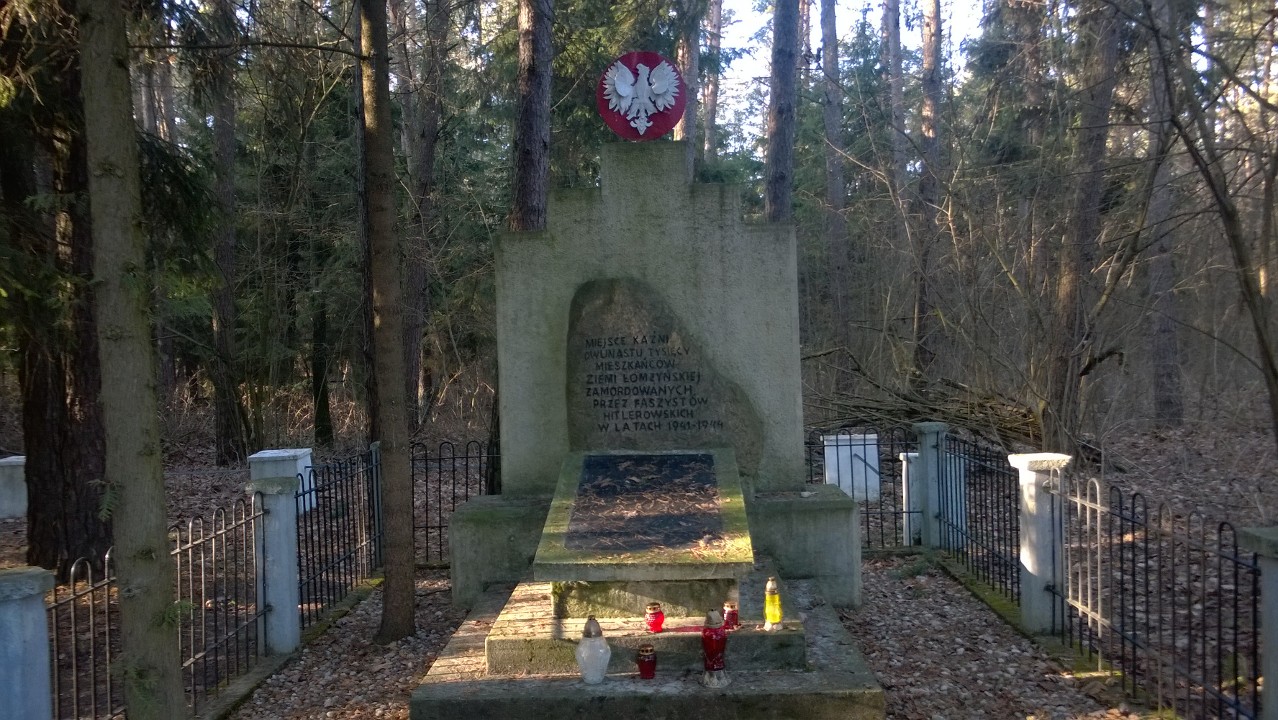 We are still looking for information on the identity of the victims and the location of Jewish graves in Giełczyn. If you know something more, write to us at the following address: fundacjazapomniane@gmail.com.

Recording of the Zapomniane Foundation (audio file), name: Józef [witness to the story], b. – [the oldest inhabitant of Giełczyn], subject and keywords: Jewish graves in Giełczyn, interviewed by Agnieszka Nieradko, Giełczyn, 25 November 2015.

Recording of the Zapomniane Foundation (audio file), inhabitants of Giełczyn [including a witness to the history born in 1935], subject and keywords: Jewish graves in Giełczyn, interviewed by Agnieszka Nieradko, Giełczyn, 25 November 2015.

IPN Bu 2448/34/5, the Chief Commission for the Examination of German Crimes in Poland. Archives of the białostockie province, Łomża district.