Jewish cemetery in Działoszyce and the area around the cemetery.

On September 3, 1942, during the deportation of Jews from the ghetto in Działoszyce, the German military police and the Gestapo murdered about 1,500 people, the elderly and the infirm, in the opinion of the perpetrators, unfit for transport. The bodies were buried in five mass graves, two in the cemetery and three next to it. The massacre took place in front of the inhabitants of Działoszyce, as evidenced by the following accounts:

Kazimierz S. […] “In the autumn of 1942, the Germans gathered Jews from Działoszyce and led them outside the city, shot them all there, the pits were dug where the Jews were buried, outside the city, at the site of the execution.” (IPN GK 179/150)

Jan K. saw how, in the middle of the day, the Germans transported Jews from Działoszyce outside the city in carts, to the pits 500 m from the town, stripped them all naked and forced them to enter the pit. Three Germans stood over the pit with rifles and shot them all. They killed 1,115 Jews on that day. From 5 a.m. to 2 p.m. they were shooting the local Jews, afterwards they brought Jews from other villages to the same place and were shooting them until the evening. (IPN GK 179/150)

Meir Zonenfeld, quoted by Dariusz Libionka, recalls the day of September 3, 1942: “We thought that they would take us to the railway station. But they took us directly to the Jewish cemetery, to the place where the dogcatchers shot dogs and old sick horses.” There were already three huge pits dug the previous night. […] “At a distance of 50 meters from the ditch, Jews were ordered to strip naked and enter the ditch, and the German military policemen and Gestapo standing by the ditch shot the victims. The next group of Jews was positioned over the ditch, shot from behind, and then thrown into the ditch. About 1,200 Jews were buried in this ditch in three layers. Then they filled the ditches with soil. The action […] lasted from morning to 2 p.m.” (Libionka D., “Akcje wysiedleńcza”, in: Dalej jest noc, ed. Engelking, Grabowski, Warsaw 2018)

On the other hand, The Register of Killing Sites and Crimes from the former kieleckie province gives the number of two pits in the cemetery where the victims of this murder were buried.

Moreover, in the reports of the inhabitants of Działoszyce there is information about the grave of 8 people in the garden of Tomasz Z.

Bogdan K: “In 1942, when there was a round-up of Jews in Działoszyce, a few Jews escaped. The Germans caught them in the bushes near the village of Kujawki, in Drojżewice borough. They took them to the garden of Tomasz Z., and shot and buried them all there. The son of the garden’s owner, Tadeusz Z., confirmed this fact: “In the autumn of 1942, when the Germans caught the Jews, they brought them all to my garden. They shot and buried them behind the barn. 8 people were shot there.” (IPN GK 179/150)

The Register of Killing Sites and Crimes from the former kieleckie province also mentions the murder of 20 Jewish patients of the hospital in 1943. There is no information about the place where the bodies were buried. 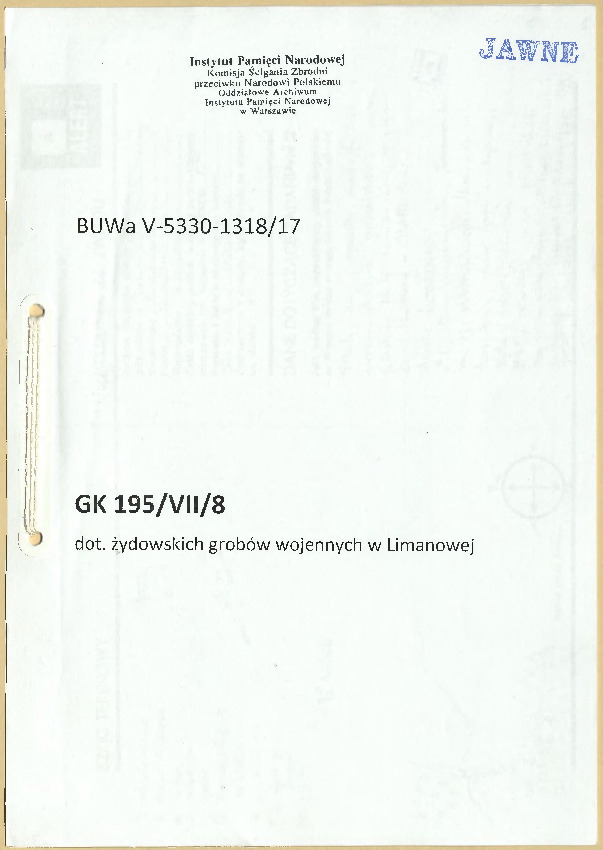 We are still looking for information on the identity of the victims and the location of Jewish graves in Działoszyce. If you know something more, write to us at the following address: fundacjazapomniane@gmail.com.

IPN BU 2448/358 questionnaires from the collection of The Chief Commission for the Examination of German Crimes in Poland, Pińczów district, Executions in the town of Działoszyce.

IPN GK 179/150 Investigation materials of The Regional Commission for the Examination of German Crimes in Radom regarding German crimes in Działoszyce (Pińczów district) and the surrounding area.

A fragment of the publication of The Register of Killing Sites and Crimes committed by the Germans in Poland between 1939 and 1945, kieleckie province, Warsaw 1980