A bunker [near] Starosiel in the forest. The Jewish cemetery in Dubienka – two mass graves.

Dubienka was a temporary ghetto on the way to death camps. In April 1940 Jews from Łódź were brought in there. “In 1942 a number of transports arrived from the Lublin District and also from the Cracow District where 218 thousand Jews lived in 1942. Those who were not taken to the death camp in Bełżec straight away were placed in Dubienka, among others. The first murder of Jews in Dubienka happened in October 1940 when all the Jews living in Dubienka were ordered to gather on the square opposite the synagogue. Approx. 110 people were chosen and shot to death immediately. The rest was transported to a temporary camp in Hrubieszów. Those who survived Hrubieszów camp were killed in Sobibów death camp. A document from the Chief Commission for the Examination of German Crimes in Poland from 1972 does not answer the question what happened to the bodies of people murdered on that day in Dubienka (IPN BU 2448/560.)

Jadwiga K., a resident of Dubienka born in 1931, whom we met in July 2014 told us about the murders that were committed on the square in Dubienka: “It was in 1940 or 1941, when Germany attacked Russia, they ordered [Jews] to go to the square and killed them there. In Dubienka, here on this street near the river and on the square, there were only Jews living. I know there were killing on the square. I heard that old Motel who used to drive carts to Lublin didn’t go to the square. They walked around checking and they killed him in his bed. And later they took them to Sobibór. And before that Jews made themselves a bunker [near] Starosiel in the forest. They wanted to survive. In the meantime, I don’t know if someone ratted them out [reported them] or not. The military police, SS-men [killed] them. They took them away, killed them and [threw] them into one grave. […] When they were killing them on the square and [then] they were moving the bodies… they left them and went [back] to bring the rest… I went there and saw them dead, this blood… Since then, for a long time, for a few years, I couldn’t eat borscht [beetroot soup.] I think they were buried in separate graves. Later, when they [Germans] were killing in masses, they dug a ditch.” Jadwiga wasn’t able to answer the question how many people were killed then.

Tadeusz B. (born in 1928) told a representative of the “Pamięć, która trwa” Foundation about a mass grave on the Jewish cemetery in Dubienka: “It was in 1942. Germans ordered the mayor to dig a ditch on the Jewish cemetery and the mayor summoned people [to do it.] The next day Germans led Jews out of the police station in two groups, 14-16 Jews in each of them. Jews were led in pairs, in a file. They were led to the ditch and shot there. […] Now it is located outside of the cemetery fence. Around 30 Jews were buried there on that day. The site is unmarked, difficult to locate.”

No documents confirming the murder of Jews in Dubienka in 1942 were found in the archives of the Institute of National Remembrance. What was found, though, was a survey from 1968, according to which in October 1943 the bodies of 54 Jews were buried on the Jewish cemetery in Dubienka. They were murdered because “they did not report to the camp despite an order to leave.” The mass grave’s dimensions were meant to be 15 metres by 2 metres. Among the people killed on that day were: Rut Nuckim, a tailor from Dubienka, 50 years old; Biederman Icek, a tinsmith from Dubienka, 49 years old; Raful, a merchant from Dubienka, 25 years old with his wife, 21 years old. The other names were not be established. All the murdered people came from Dubienka and surrounding villages (IPN BU 2448/559.)

Meanwhile, the “Register of German crimes comitted between 1939-1944 in the Hrubieszów District”, (sent by PGRN 196801971, Hrubieszów District) provides an information that in 1943 in Dubienka 2100 Jews were murdered. They were meant to be the deportees from Cracow as well as some Jews from Dubienka area, killed on the same day on the Jewish cemetery.

Jadwiga could recall death of particular people, therefore we can – in the smallest way possible – bring back their humanity stolen from them by their perpetrators: “A Jewish girl was walking. He [the murderer] walked alongside as if they were an engaged couple. They got to the ditch and she asked: ‘How am I…? Wait – she said to the German – I’ll undress so they don’t need to wash [the clothes.]’ She was wearing three changes of underwear and took off two of them. It was in November, there were no more Jews here. She kneeled over the ditch and he shot her in the back. People were saying that this Jewish girl was walking around the village asking everyone to hide her but no one wanted to do it. So she decided to come [forward.] […] At the corner behind the church there was Berko who used to have a shop and his daughter with her husband and two children – they had two sons. Firstly, they took women and then men but they didn’t want to be separated: ‘If I’m going to die, I’ll die with my children and my children with me.’ They didn’t let them [Germans] to bind them, she walked arm in arm with him, he held one child and she held the other. They were led to the cemetery. Four people bound together and a German on each side.” (Dubienka, 21 July 2014.)

No comprehensive GPR surveys were conducted.

An aerial photography query was conducted for this area, which resulted in the acquisition of aerial photography from September 1944. The interpretation of aerial photography revealed ground disturbances in the western, central and eastern parts of the cemetery. Especially inn the Western part there are clearly visible trenches which could have served as the collective burial sites. In the central part of a picture, one can see ground disturbances between growing trees. In addition, parallel excavations along the eastern border of the cemetery can be observed.

The LIDAR survey indicates numerous ground disturbances however the exact location of the graves remains impossible. 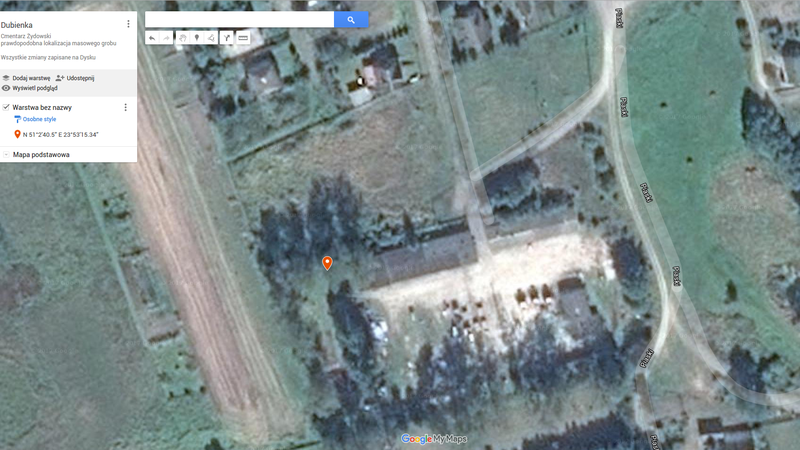 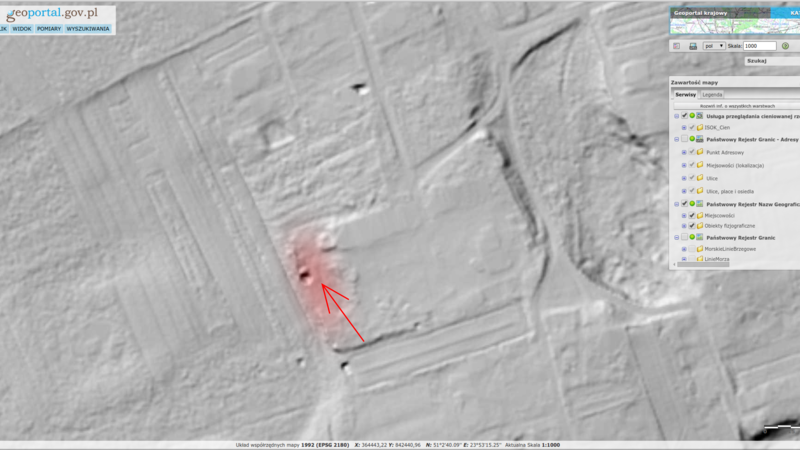 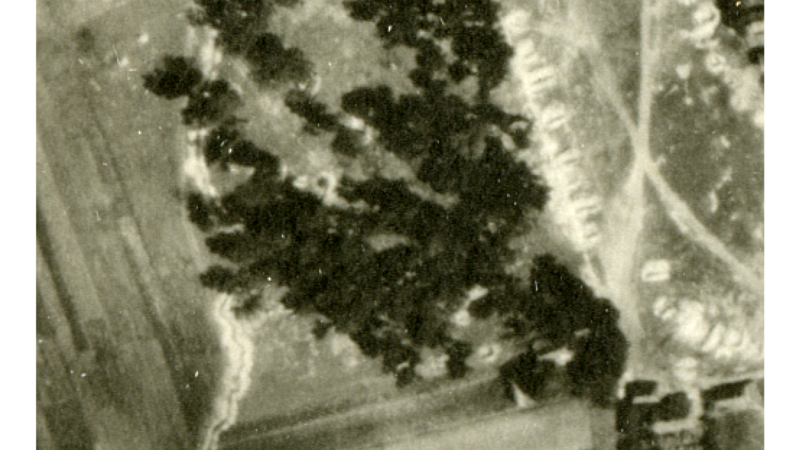 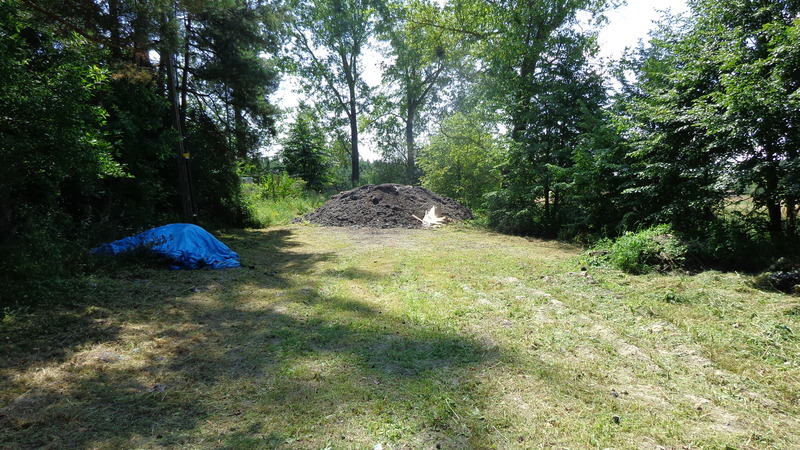 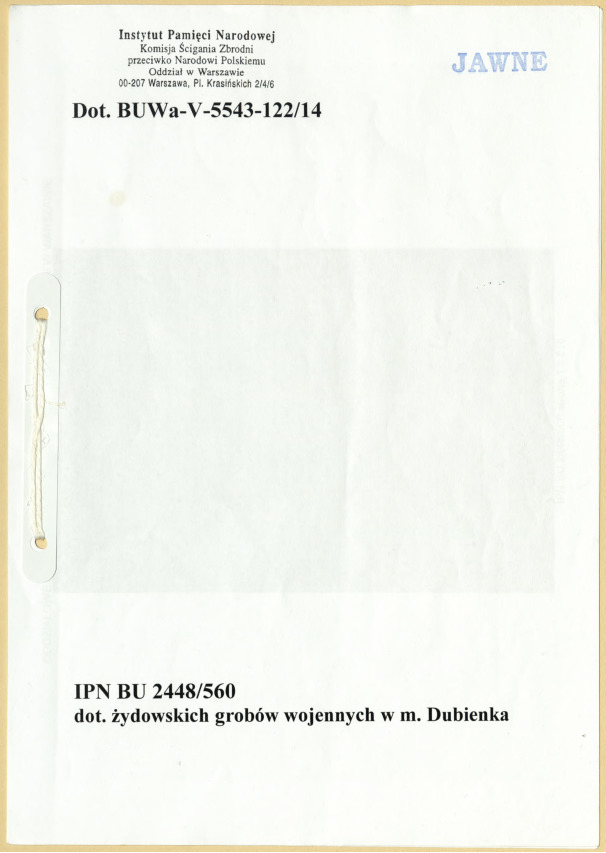 We are still looking for information on the identity of the victims and the location of Jewish graves in Dubienka. If you know something more, write to us at the following address: fundacjazapomniane@gmail.com.

Recording of The Lasting Memory Foundation (record of the witness’s account), Mr. Tadeusz, resident of Dubienka, b. 9/11/1928, recording of April 24, 2013, subject and key words: murders of Jews in Dubienka.

Letter of 23/04/2014 from the Institute of National Remembrance, Commission for the Examination of Crimes against the Polish Nation, the Branch Office of Document Access and Archiving in Warsaw to the Rabbinical Commission for Cemeteries containing information on the shooting of 2,100 Jews in Dubienka in March 1943 based on a query in the List of German Crimes in 1939-1944 in the hrubieszowski district [in:] “Lists of people murdered … sent by PGRN 196801971 Hrubieszów district” in files ref. no. IPN Lu 504/5, p. 85.