10 Jewish men, women and children who were hiding in the forest around Chroberz. One of the women was called Balicka and she came from Sosnowiec. The youngest child was about 8 months old and was killed in her mother’s arms. The murder was committed by the military policemen from Chroberz and Busko in 1943 [probably in December] in Chroberz.

The area around the present ruins of the distillery in Chroberz. The forest around Chroberz, incl. the land around the gamekeeper’s cottage. Near the hill in Chroberz (a grave of 10 people murdered in 1943.)

Some of the local Jews took refuge in the forest around Chroberz. From July till December 1943 at least three hideouts [one of them is meant to be located near Zagorzyce and Smyków, the other in the Chroberz forest near the gamekeeper’s cottage] were found out and the Jews who hid in them were murdered (IPN Ki 53/5097 p. 1).

A particularly tragic story is linked to the area around the present ruins of the distillery in Chroberz: “In March 1944 military policemen from Chroberz captured 13 Jews – 5 men, 4 women and 4 children (the youngest one about 1.5 years old). Out of the captured people, 5 lived previously in Chroberz. All 13 were shot to death behind the distillery building and buried by local farmers who were summoned for this purpose.” (IPN Ki 53/5097 p. 7)

A resident from Pinczów contacted us in relation to one of the murders behind the distillery. In autumn 2013 she sent us a statement written by her grandfather Władysław (born in 1932): “I don’t remember the year or the month, maybe it was before August 1943, something around that, my uncle – my mother’s brother – was killed and a month or two after his death we moved to Leszcze where I’ve been living to this day. I was a boy and a real busybody – I eavesdropped but the Germans didn’t do anything, just shooed me away. I was maybe 10 years old when I saw them shooting Jews. I lived nearby, in Olszyk. People used to say that they were capturing them in the nearby forests. Germans brought them to Chroberz and they put my father and other men to keep guard at the jail near the council office where they kept them. I heard them crying and lamenting all night. Boys were ordered to dig a ditch near the distillery, about a size of this room (around 4 metres by 4 metres and 3 metres deep.) I saw it from a distance because I wasn’t allowed to come near. The Jews (men, women, children) walked from the jail through Olszyk to the distillery. I don’t know how many of them – maybe about 40, maybe less but when they walked in a single file they spread for about 50 metres. They walked one by one to the edge of the ditch and stopped facing it, with their backs towards the river. Germans told them to look inside and shot them in the back. There were at least three shooters in dark green uniforms. When they finished, the men buried the bodies. For some time, I saw the soil moving while the people underneath were dying and then it stopped. I don’t know whether anyone marked this place. I don’t think there is anyone else my age left to remember it.” (from the archive of Fundacja Zapomniane, the written statement by Władysław Sz., received on 29 October 2013.)

The murders at the distillery are also remembered by another resident of Chroberz. This time it is about the murder of approx. 10 people – men and women: “They were shot here, men and women from Chroberz, they used to live here. [They are] together in one ditch. There was a hill, [it was] next to this hill.” (Chroberz, 10 March 2015.)

The information about an execution of 10 Jews can also be found in the “Report of the course of action and the result of the investigation into the murderous activities of the Nazi military police in Chroberz”: “In 1943, probably in December, military policemen from Chroberz and Busko captured 10 Jews hiding near Chroberz – men, women and children. They brought them to Chroberz, ordered the victims to dig a hole and shot them to death. One of the women was called Balicka and she came from Sosnowiec. She gave one of the Nazis her jewels in exchange for her life. The Nazi took the bribe but shot her nevertheless. The youngest child was about 8 months old and was killed in her mother’s arms.” (IPN Ki 53/5097 p. 7)

The eyewitness quoted previously, Władysław Sz., describes other events related to Jews: “I remember another event, although I haven’t personally seen it. The boys passed the information that someone is held in a field in Wielkopolskie. We ran there and on the ground between potato piles a young Jewish woman was lying with a child in her arms – an 8 or 9-year-old boy with curly hair. They were both dead.” (from the archive of Fundacja Zapomniane, the written statement by Władysław Sz., received on 29 October 2013.)

It was probably Rajzla Goździńska and her son who were killed in Chroberz in 1943 (IPN Ki 53/5097, p. 7). Rajzla escaped from the ghetto in Kielce and together with her son was hiding in a village near Chroberz. Rajzla’s sister, Jadwiga nee Praw, survived the war, married a Chroberz resident and died in early 2000s. She is buried on the parish cemetery in Chroberz. According to her statement given on 6 April 1970 in front of the Regional Commission for the Examination of German Crimes in Kielce, Rajzla was murdered in February 1942 together with her 6-year-old son and a man from Pińczów called Naftaluk. (syng. akt Ds 34/69)

In March 2021, GPR was carried out in a place precisely indicated by a witness. On the echograms named CHR10002-CHR10005, an anomaly was recorded that started at approx. 1.3 mb and continued to approx. 5.5-6.0 mb. The approximate depth of the anomaly is 1.5 m below ground level. The CHR10004 profile shows a clear anomaly starting at approx. 1.3 m and continuing to approx. 3.0 m, the approximate depth is over 3.0 m below the sea level. This anomaly is of unknown origin and only appears on one GPR profile. Due to the lack of correlation of this anomaly on other profiles, it is not taken into account in the overall interpretation. The approximate format of the anomaly is approx. 4.2 m long, approx. 2.0-2.5 m wide and approx. 1.5 m deep below the surface.

The LIDAR survey indicate ground disturbance in the place indicated by the local residents but it is not clear.

We sincerely thank the International Alliance for the Remembrance of the Holocaust and the Embassy of the Federal Republic of Germany in Warsaw for funding the research project, thanks to which the georadoar research of this place was carried out. 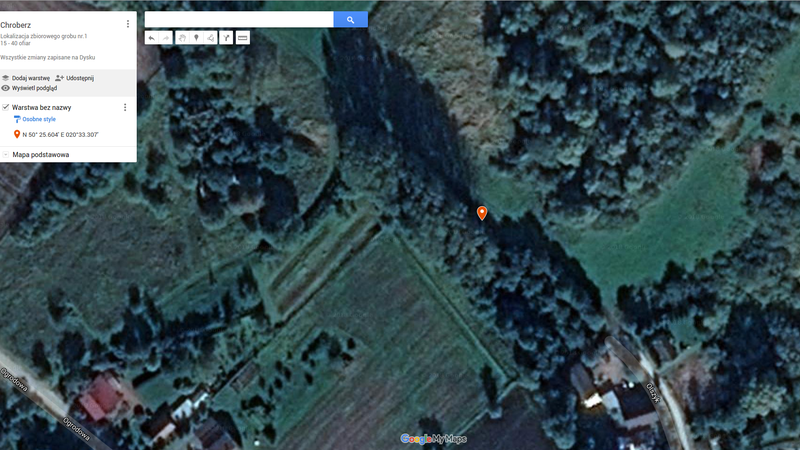 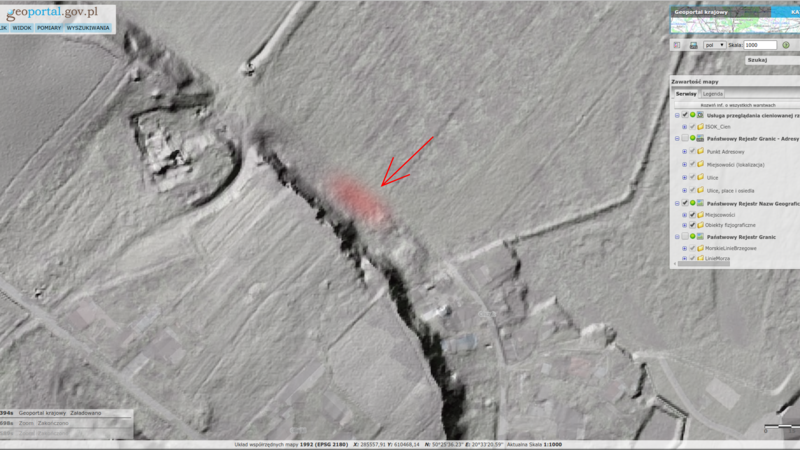 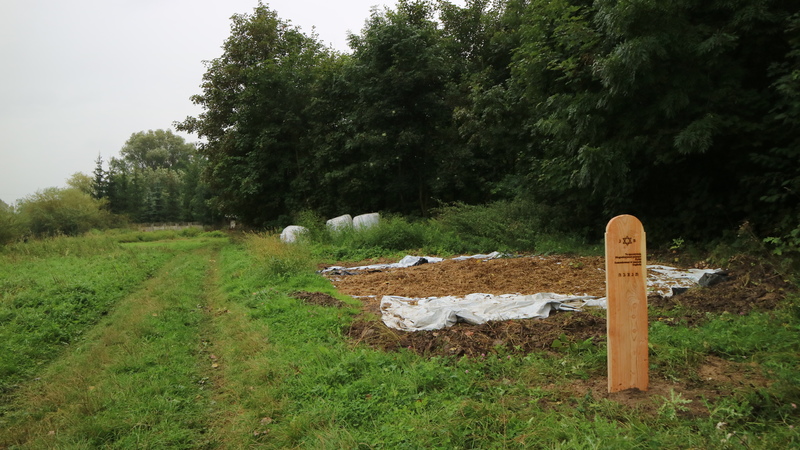 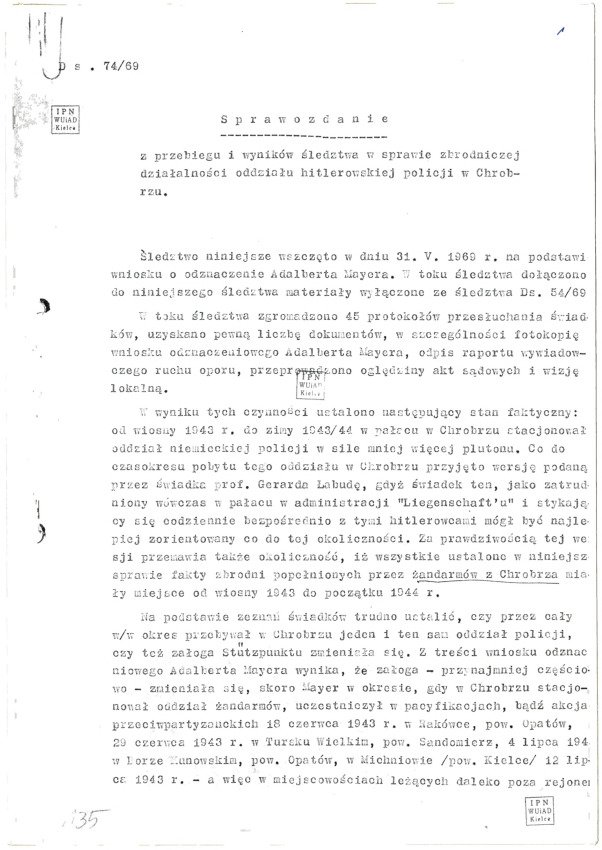 We are still looking for information on the identity of the victims and the location of Jewish graves in Chroberz. If you know something more, write to us at the following address: fundacjazapomniane@gmail.com.

IPN Ki 013/2092. Files of the case against Kazimierz Siemianowski.

IPN BU 2448/356-357, Questionnaires of the Chief Commission for the Examination of German Crimes in Poland.