Between the villages of Bytomsko and Żegocina there is a grave of eight Jews murdered on November 25, 1942. Andrzej G., who served as the village administrator in Bytomsko during the war, testified: “The bodies of the murdered Jews were in a pit dug on a slope overgrown with young fir trees. The top was covered with fir branches. Next to this “bunker” there was a small plane with traces of blood on it, which indicated that the Jews caught in this “bunker” were shot there. After shooting, the bodies were pulled into the bunker, one was thrown on top of the other. […] I recognized the body of Szymek Majar, a Jew who lived in Rajbrot. I couldn’t identify the rest of the bodies, as their faces were mutilated as a result of shots fired at the back of the head. People present during the burial claimed that there was a body of a Jew from Lipnica. […] On that day, 7 people of Jewish nationality were shot after being caught by the military policemen in the aforementioned “bunker”. (testimony from April 21, 1970)

Five years later, Andrzej G. testified that “among the murdered, I recognized a Jew, Szymon Majer from Rajbrot, and another one from Rozdziela, whose name or nickname was Lilak.” (testimony from May 5, 1975)

Zygmunt Riegielhaupt (later Rygiel), survivor of the Holocaust also mentions the bunker in his testimony submitted to the USC Shoah Foundation: “It was in Żegocina. This is where the bunker was built. We found another place nearby, and this bunker became the grave of 8 people. They were murdered. I don’t know which of the police services…

– You mean that other Jews were hiding there?

– Who was that? Could you please give their names?

– It was the Lewkowicz family. Szymon, his wife, I don’t know what her name was, daughter Laja and son Jankiel.

The information about the Bytomsko bunker can be found in the testimony of the survivor, Jakub Neugut: “In Bytomsko, Bochnia county, there is a mass grave of 8 people handed in by a local forester. They were shot on November 25, 1943 in the bunker where they were hiding. Among the victims were Feingut Jonasz, Fiszler, Aftrgut and others whose names I don’t remember.” (30/1785 AZIH)

The circumstances of the discovery of the Jewish hideout and the murder of the people hiding there can be found in the account of Michał Mróz, an inhabitant of Bytomsko, which was posted on the website of Żegocina borough:

„At the end of the year (…), Jews were found in the manor forest near Opuszcza. They were hiding in a bunker dug in the ground. This is what happened. A cow was stolen from the forester Kaczmarczyk at night. He reported it to the police. They started looking for it and soon they found the cow on the so-called Budzisko, but it was already killed. They met a Jew there, but he didn’t manage to escape, so they arrested him and took him to the police in Bochnia. The Jew was persuaded to confess and to say with whom and where he lives. He promised  to show where his companions live. In the morning of December, four policemen with a dog, two Germans and a man named Bogusz came to the bunker and found 7 Jews from the area. Two of them were outside the bunker, probably hiding on fir trees. They shot all seven of them. We could hear the shots in the village. We were there after the whole incident, because the Germans ordered us to bury them. It was a terrible view. The bodies, covered with the soil and branches, were terribly massacred. Those Krauts put bursts of rifles in their bodies. They stripped them down to their underwear. They tried to recognize them, but it seemed that two were from Rajbrot. [..] The whole tragedy really affected the local people. It showed the barbarity of the enemy. But soon everything was forgotten.” (archive, Zegocina.pl, access date: December 22, 2021)

There are two sinkholes on the steep slope of a beech forest, which are the remains of the hideout. Both depressions are clearly visible on the relief model (LiDAR). 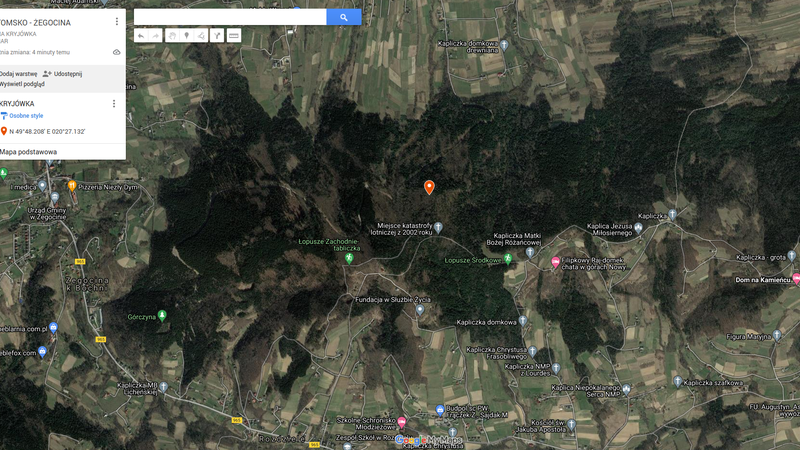 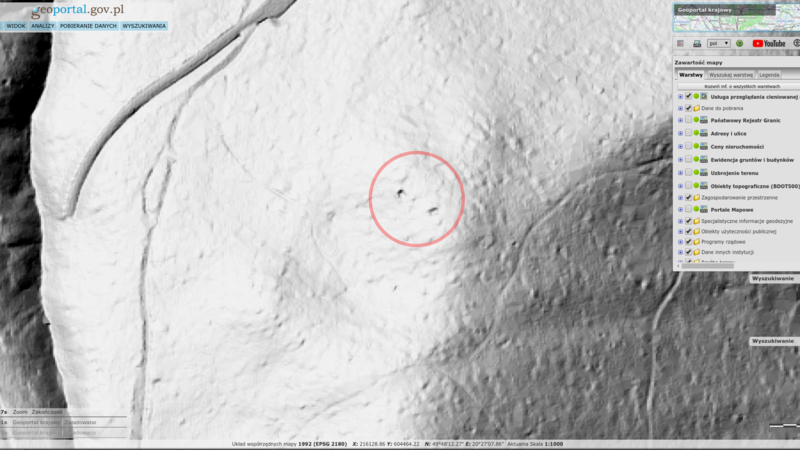 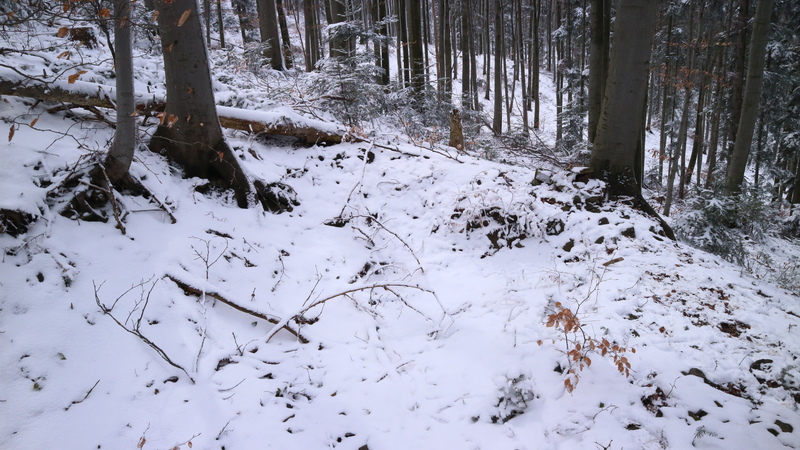 We are still looking for information on the identity of the victims and the location of Jewish grave between Bytomsko and Żegocina. If you know something more, write to us at the following address: fundacjazapomniane@gmail.com.

Testimony of Zygmunt Rigiel (Riegelhaupt), written down in 1997, from the collection of the USC Shoah Foundation.

Testimony of Andrzej G. submitted to The Regional Commission for the Examination of German Crimes in Krakow, S. S 23/04/Zn, from 1970 and 1975.