A meadow within the borders of Rydzewski’s farmland, 20 metres away from the barn.

Eleven Jews, probably from Stawiski, were hiding in the outbuildings owned by one of the village residents. Among them there were members of the Melczak family: Abram and his wife with children Mendel, Szafira and Socher, although one of the witnesses remembered that only men between 20 and 50 years of age were murdered on that day. The hideout was probably disclosed by a Jewish boy who was captured by the military policemen and promised to be released in exchange for the betrayal. It has been confirmed by a testimony of Feliks S. in May 1975 and an account of Marian F. (born in 1937), a resident of Budy Stawiskie, recorded on 15 August 2017.

The murder of the Jews and the Polish farmer was probably committed in 1943. They were buried in a mass grave among the farm buildings. After the war the body of the farmer was exhumed and moved to the cemetery. The Jews has been resting in the unmarked grave to this day.

The testimony of Marian Z. from 15 July 1972 (the case file no S 25/67): “At that time Rydzewski was hiding Jews, 11 of them. As you know, the Germans were persecuting Jews, murdering them without mercy. […] When I approached Rydzewski’s outbuildings with a group of people from our village, I noticed dead Jews lying there. I can’t remember how they were called. They were Jews from nearby Stawiski. On the military policemen’s order, we commenced digging a ditch on the meadow, next to the barn, to bury the murdered [people]. […] The Jews murdered by the military police were men only, 25 to 50 years of age.”

The testimony of Feliks S. from 7 May 1975 (the case file no S 25/67): “In 1943, I think, in the village of Budy Stawiskie, 11 Jews and a farmer who was hiding them were murdered by military policemen. On the same day near Karwowo the military policemen killed a Jew who told them that in Budy Stawiskie other Jews were also hiding.”

The testimony of Aleksander B. from 7 May 1975 (the case file no S 25/67): “In Rydzewski’s farm buildings 11 Jews were hiding: 9 men and 2 women. I knew these Jews. They came from Stawiski, from the well-known Melczak family. One of them was called Abram, he was about 50 years old and he was an owner of a bus. His son Mendel was 25 years old, his daughter Szafira 20 years old, his son Socher 16 years old and another son – but I don’t remember his name. Fajba Melczak was also hiding. He was 55 years old, an owner of a transport company. There was also Abram’s wife – I can’t remember her name. I didn’t know other Jews that were hiding at Rydzewski’s [place.] All of them were murdered by the military police… They were lying on the Rydzewski’s farmland, near the barn. Residents of our village, who are no longer alive, buried their bodies. Apart from the bodies of the murdered Jews they also buried the body of Rydzewski. They dug a ditch 20 metres away from the barn and buried the bodies in it.”

A testimony of one of the witnesses (born in 1915 in Stawiski) given on 26 July 1946 mentions the following names of the Jews hiding at farmer Rydzewski’s place in Budy Stawiskie: “After the liquidation of the whole Jewish settlement in Stawiski and surrounding villages many Jews hid on the farms, for example Fajwel Chankowicz with his family hid in Budy Stawiskie at farmer Rydzewski’s place but they were denounced accidentally by another farmer and all of them were shot to death. Farmer Rydzewski and Fajwel Kodis with his two sons were also killed then.” (“Wokół Jedwabnego”, vol. II, 2002 p. 339)

The account of Marian F. (born in 1937): “They killed Jews in Stawiski so they were hiding in villages, forests and so on. They caught a 15-year-old Jewish boy – he was walking to Karwowo, military police was driving by, they caught him, saw he was a Jew so asked him where [other] Jews were so they would let him live. And they buried them behind a barn. There was a barn here before, now everything is destroyed. They killed the farmer as well. When the war was over, he was dug out and moved to the cemetery. But few Jews are still buried there. […] They were hiding in the barn, they [the Germans] told them to lie down on the ground and one after another… And then they ordered people from the village to bury them. The Jews on the bottom and him [the farmer] on the top. It was towards the end of the war, in spring, I think. There was a meadow and on that meadow the descendants of the farmer still live.” (Budy Stawiskie, 15 August 2017.) 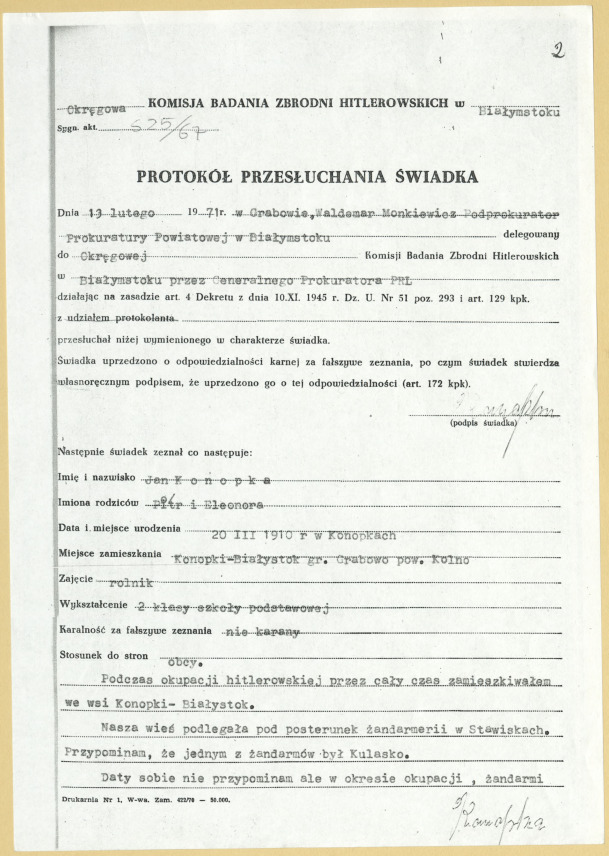 We are still looking for information on the identity of the victims and the location of Jewish graves in Budy Stawiskie. If you know something more, write to us at the following address: fundacjazapomniane@gmail.com.