Private yard next to a house and farm buildings.

On June 29, 2021, we carried out a site inspection of the Jewish war grave in Brzeziny. The grave is located on a private property between farm buildings. The bodies of about 5 people murdered in the first half of 1944 are buried there. The current owners of the plot know the history of hiding and murder of the Jews:

“-    Were these Jews hiding somewhere here?

–       They were hiding here. There was an old barn and a tunnel. In this place. They are buried somewhere here. In this area.

–       The tunnel was under there. Now it’s gone. Under there, because there was an old barn with a straw roof.

–       Do you know anything about those Jews? Who were they? Where were they from? From Wielopole?

–       They were fat cats. There were two doctors, a prosecutor and probably a child.

–    I would have to ask. Our father was accused of turning these Jews in. He spent three months in prison because of that. But it turned out that he didn’t and they released him.

We also registered the account of Tadeusz W., born in 1930. According to him, the twenty-year-old Tratl brothers were also hiding in the bunker on Franciszek C.’s property in Brzeziny:

“- There were two men from Brzeziny, they were farmers. Two brothers.The third man was a doctor, the fourth was an attorney and there was a sister, and I don’t know if the attorney’s or the doctor’s.

–       Not at all. They came together with the Tratl [brothers] and they hid there.

–       There was a bunker in the barn and they were hiding in that bunker. They were buried right next to that barn.

The prosecutor’s files on the criminal case with the reference number IPN Rz 367/228 contain extensive information about a group of Jews hiding in a bunker built under a barn belonging to Franciszek C. “In the upper Brzeziny, six Jews were hiding in a bunker under the barn at the C.’s property. Someone had betrayed them and reported them in. […] The Germans and the blue police came and they shot all of them in this bunker. Then the neighbors dug a pit and buried them nearby.” (p. 5)

Józef O.: “My brother-in-law, Franciszek C., keeps the Jews in a bunker on his property. There were three of them, the doctor and his sister, I don’t remember their name, and one Jewish lawyer. After a month Władysław S. from the Brzeziny group came with the blue police. As I recall there were eight of them, all of them from blue police. When they knocked on the door, my brother-in-law opened it and was immediately handcuffed by the police and led to the field. They accused him of hiding three Jews, two named Tratl, a doctor and his sister. I don’t remember the name of the lawyer. Then C. showed where the Jews were hiding, and the police started shooting. Jews were seriously injured as a result of the shooting. The police ordered the peasants to take the Jews out of the bunker.” (pp. 37-38)

Piotr W.: “There was a pit dug under the barn, and the Jews were hiding there. The police shot the Jews when they were in this pit. I didn’t know any of these Jews. After a while they finished shooting and ordered me and Józef O. or S. to take out the Jews from the pit. Two of them were still alive, so they tied them up and asked them some questions, but we didn’t hear it because they told us to leave. Then they shot them. Józef W. and Franciszek P. dug a hole in which the victims were buried. There were 4 men and 1 woman. After the burial, the police went to Wielopole by wagon and we went home.” (pp. 22-23)

Józef W.: “[…] When I got to C.’s property, I saw five killed Jews, I knew two of them who were called Trachlaki. After the Germans and the blue police had approached the crime scene, I was ordered to dig a pit and bury the killed Jews. There were two men and one woman who I didn’t know, because they were not from Brzeziny.” 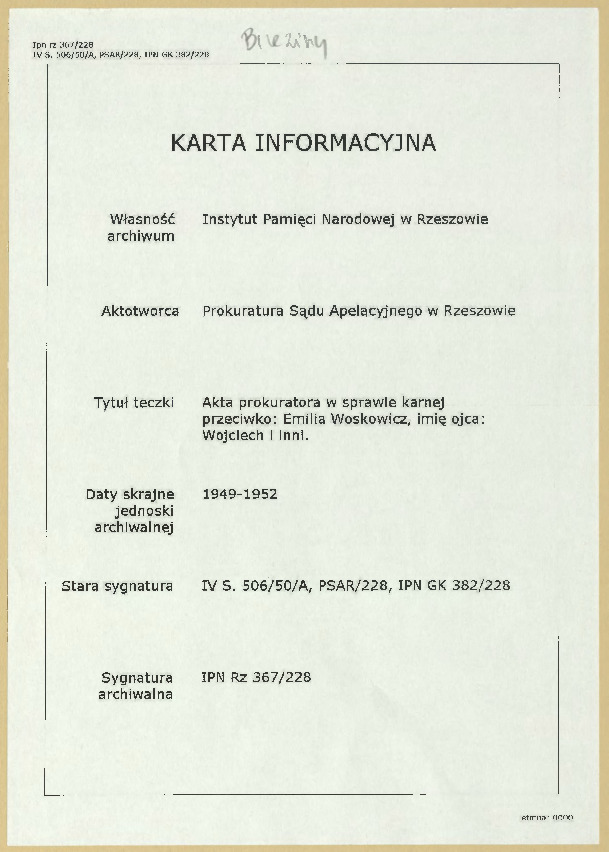 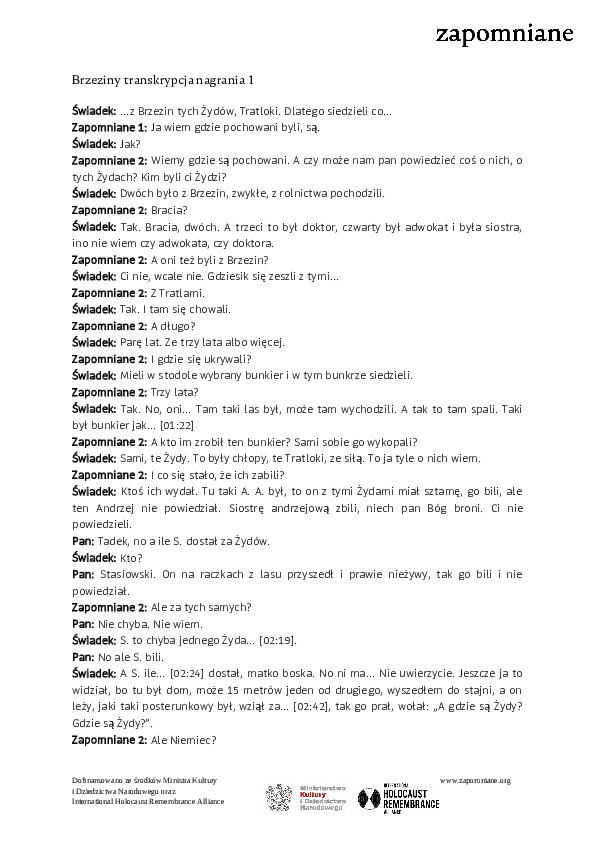 We are still looking for information on the identity of the victims and the location of Jewish graves in Brzeziny. If you know something more, write to us at the following address: fundacjazapomniane@gmail.com.

We would like to thank the International Holocaust Remembrance Alliance and the Embassy of the Federal Republic of Germany in Warsaw for funding the research project, which made it possible to obtain information about this village.