The Jewish cemetery in Brzesko.

Cyla Krauter died in a hospital in Brzesko in June 1942 as a result of shot wounds inflicted by Germans. Janina K. (born in 1914), a resident of Brzesko, keeps Cyla in her memories. We recorded Ms K.’s account in June 2017: “I used to have a friend in the secondary school, Cyla Krauterówna. She was so beautiful, she had long, blond, curly hair. She came from a very orthodox family, even their housekeeper was Jewish. Her father owned a bookshop and a printing house. I often visited their home. I remember a Saturday evening, after the Sabbath – it was before the war. A table, a challah, a 9-arm candlestick… in front of the table the old Krauter was standing dressed in a tallit [a prayer shawl.]

– No. But even if I was praying we could pray together, we have the same ten commandments. Do you remember?

I told him all ten commandments.

– Am I your neighbour as a Jew?

– Of course. That’s what I’ve been taught at home, we’ve got the same God.

– For your mother and your father, I am a neighbour, I know that. But for your brother?

Because at that time Młodzieżwszechpolska [a Polish youth organisation based on nationalist and fascist doctrine] came into being and my brother Leopold joined them. They were meant to distribute posters that read ‘Don’t buy from a Jew.’ Once at school several boys were called by the headmaster and later by the mayor. He told them: ‘Jews pay taxes like everyone else, you can’t treat them that way. If you still want to belong to this organisation I’ll tell the headmaster and you’ll be blacklisted – you won’t get into any school.’

All the boys promised to withdraw. My brother kept his promise. Later he worked in Radziwiłów near the Polish-Ukrainian border. He had a Jewish friend who saved his life. This friend learned that NKVD was going to take Poles away to Siberia. He informed my brother who managed to escape and wait out the Soviet occupation.

But Cyla didn’t survive the war. She had a fiance, Mundek Strauber. They were such a beautiful couple. Mundek’s mum converted to Catholicism so when Cyla fell in love with him her parents didn’t want to agree for the wedding. Only after Cyla’s mother’s death in 1938 the young couple could get married. Mundek was so handsome and clever. He was tutoring us in maths when we were still at school. Later on, he became a barrister. And Cyla was always so elegant. Her older sister lived with her husband in Vienna,  very often she sent her clothes. I remember her walking through Brzesko in a black fur. And her hat was also black.

She and Mundek were shot at the Uszwica river. I guess it was 1940 or 1941, I can’t remember. They were walking together. They saw a German and started to run. Mundek died on the spot but Cyla kept running. She was shot about 50 metres further, just next to the river. I was walking down the street and a friend shouted: ‘Have you seen Cyla?’ I ran towards the river and heard a strange sound. I saw my Cyla lying [on the ground.] The bullet hit her throat. When she was trying to breath pink bubbles were coming out of the hole in her throat. Her wheezing was terrible. I ran to her brother-in-law, he brought people who took Cyla to the hospital on Jóselewicz Street in the synagogue building. She lived for a few days. When I came to see her, she was still conscious. She kept asking about Mundek. I lied to her. I told her Mundek was waiting for her and that she needed to get well quickly. I held her hand when she was dying.

At her funeral I saw her friend, a Jewish woman dressed in light colours. She wore a beige jacket and a light skirt. I was surprised because it wasn’t a suitable outfit for such an occasion. But she replied: ‘We’re happy that Cyla died that way, in a bed, surrounded by her family.’ They were buried together near the entrance to the cemetery, on the left, just next to the wall. Their grave had a simple concrete slab, no tombstone. Several years later I tried to find their grave but everything was overgrown with grass. I couldn’t find it. Maybe you’ll ? […] When I was leaving Cyla’s hospital an old Jewish woman gave me her blessing. She was yellow like a lemon. She said: ‘You will live long.’ She was right, I’m still alive. I’m 102 years old. Sometimes I remember that blessing.” (Brzesko, 17 May 2017.)

On September 15, 2022, 80 years from their death, a Jewish tombstone was erected on Cyla and Mundek’s grave. The  unveiling of the tombstone took place as part of a memorial ceremony on the 80th anniversary of the liquidation of the Brzesko Jewish community. The founders of the tombstone are the “Pamięć i dialog. Wspólna historia” Association from Brzesko, the Matzeva Foundation and the Zapomniane Foundation.

The LIDAR survey due to small exploration facilities is not helpful. 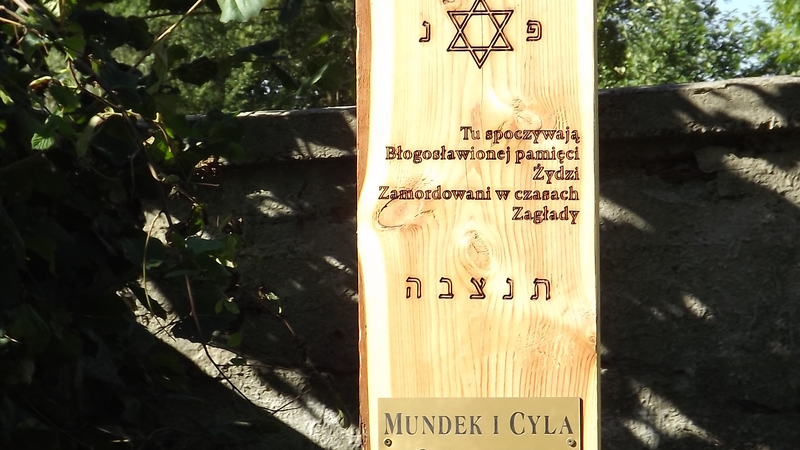 We are still looking for information on the identity of the victims and the location of Jewish graves in Brzesko. If you know something more, write to us at the following address: fundacjazapomniane@gmail.com.

Recording of the Zapomniane Foundation (audio file), name: Janina [witness to the story], date of birth 1914, subject and keywords: Jewish graves in Brzesko; story of the engaged couple Cyla Krauter and Mundek Strauber, interviewed by Agnieszka Nieradko and Anna Brzeska, transcription made by Anna Brzeska, Brzesko, 17 May 2017.