A square at the crossroad between the edge of the square and a pylon.

On 21 July 2016 a representative of the Rabbinic Commission came for a site inspection to the village of Borów to establish a site of burial of five Jews killed and buried near a square at the crossroad between the edge of the square and a pylon.

Three residents, Leokadia and Wanda (who lived in Borów during the war and have been living there since) and Marianna (from the village of Kowalków) independently of each other indicated the same place as the site of burial. According to their testimonies it was a Jewish family of five who probably came from a nearby town of Skaryszew. They reached Borów wearied and sat near the fence on the square at the crossroad. Apparently, this family has been warned by Poles about approaching Germans. They were so exhausted and emaciated that they said they didn’t care anymore and stayed put. Germans arrived soon. In the last moment the Jews tried to escape, but to no avail. One girl (the residents remembered that at the time of her death she was dressed in a red jumper and a black skirt) tried to run away but she was caught and shot. Eyewitnesses said that the Germans told the Jews to lie down on the square and they shot them. It happened in front of the residents. Then Germans ordered the residents of Borów to dig a ditch on the crossroad near the square. There the family was buried. Apparently, a mound was raised and the local community looked after it, lighting candles on the All Saints’ Day. Now there is no visible sign of the mound. The witnesses don’t remember the date or victims’ names. (Borów, 21 July 2016.)

The Register of Sites and Crimes for the former Radomskie Voivodship provides information about a murder committed in October 1942 in the village of Borów, the borough of Kazanów. “Four people of Jewish nationality [were killed], including one man, two women and a child. No information of their names. The bodies were buried in a field.”

On the 8th of August 2017, a GPR survey of the location indicated by witnesses was carried out (N51°14.483′ E21°23.0696′), to locate the mass grave of five victims. Despite the relatively accurate indication of the burial site, the precise location of the grave could not be determined. Probably the area has been excavated many times in the past, as the road and water ditch runs in a very close vicinity. There is a suspicion that the grave may now be under a gravel road, which for many years was used by the local residents and naturally increased its width.
The LIDAR survey shows ground disturbance at the confluence of gravel and asphalt roads.
The aerial photography query for this area wasn’t ordered. 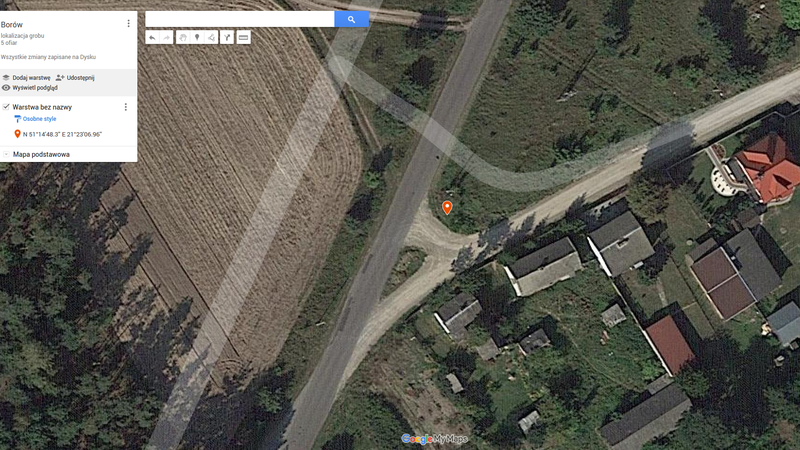 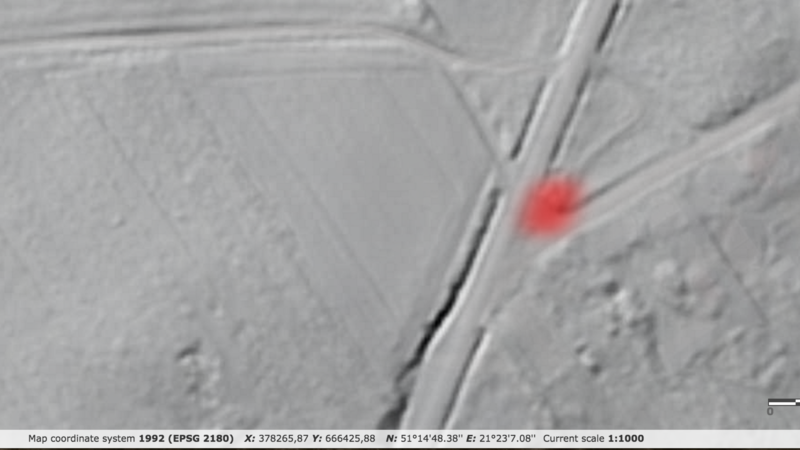 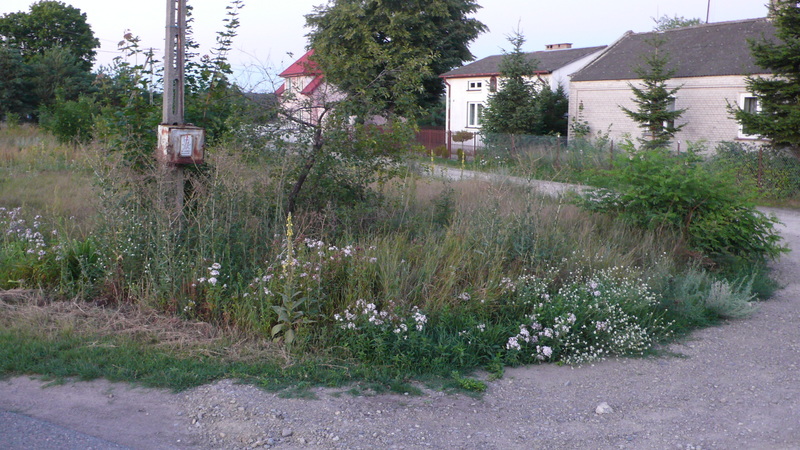 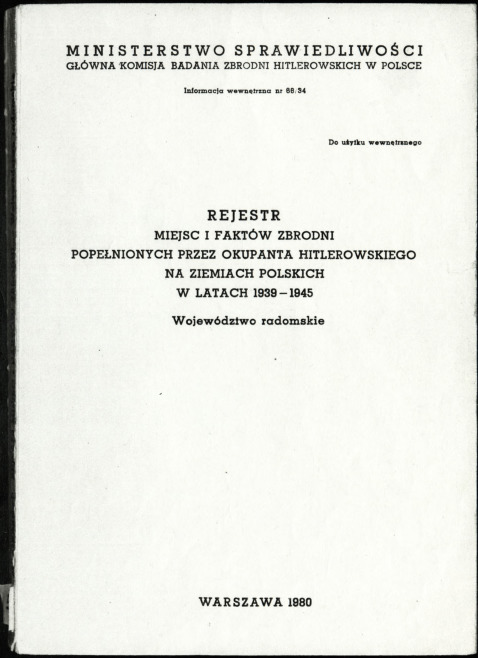 We are still looking for information on the identity of the victims and the location of Jewish graves in Borów. If you know something more, write to us at the following address: fundacjazapomniane@gmail.com.

Resources of the Zapomniane Foundation, report on the local visit carried out by a representative of the Rabbinical Commission for Cemeteries of 7/21/2016.