A grave of a Jewish woman under a tree.

In the so-called “factory forest” outside of the historical borders of the workcamp in Bliżyn there are 20-30 individual graves.

According to Bliżyn residents – Wojciech (born in 1935) and Ryszard (born in 1934) – there were no mass executions of prisoners in the camp. In the “factory forest” there could be around 20-30 individual burial sites of the victims of debilitating work, starvation diet, illnesses and maltreatment on the part of the crew. Wojciech says: “I never saw or heard any executions […]. But beatings… I can say that beatings happened every day. There was a kind of a trestle, a person lay on it and got pummelled. One trestle was on the roll-call square and the other opposite our windows, about 20 metres from our windows. […] Every day they brought five, six or ten Jews from the lager on the other side of the river. A German started the beating, hit a couple of times and gave the whip to a Ukrainian who continued. Many a time the beaten man couldn’t get down on his own, they had to push him out. Very often they screamed a lot… [crying]. They transported bodies … There were long, wooden wheelbarrows. [The bodies] were buried in very shallow [graves.] There were graves… one here, one there. They were still there after the war but later they disappeared, just small dents in the ground left. Later on, everything evened out and today is overgrown.” (Bliżyn, 8 May 2015.)

Helene G. (born in 1935 in Poland), currently living in Australia, spent three months in the Bliżyn workcamp. She also remembers the maltreatment of prisoners: “Beatings were terrible, every day on the roll-call they were saying: you did this, you did that… They beat [people] and took them away. I remember this. Sometimes they beat them and they came back but sometimes they beat them so much that they were lying on the ground half-dead so they were taking them away like corpses.” (Warsaw, 19 May 2015.) According to the workcamp questionnaire dated 28 September 1945, the Bliżyn workcamp functioned from 8 March 1943 till July 1944. The number of Poles and Jews who were imprisoned there has been estimated at 12,000 (IPN Gk 163/47). Sebastian Piątkowski, however, recognises two stages in the history of the workcamp. The first one was in 1941-42 when the camp housed Red Army soldiers imprisoned by the Germans as the POWs. Until this day there is a cemetery in Bliżyn with graves of prisoners of war – the victims of the workcamp. The second stage was in 1942-44. At that time civilians were held there – Poles and Jews with the latter as a majority. The largest transport of Jewish prisoners came from Tomaszów Mazowiecki, Kielce, Piotrków Trybunalski, as well as from Ostrowiec Świętokrzyski, Częstochowa and Białystok (Piątkowski, 2001.)

During our research conducted since 2014 in Bliżyn we focused on identifying the graves which – according to historical documents (IPN Gk 163/47) and local residents’ accounts were meant to be located outside of the historical borders of the workcamp, in the “factory forest”. We managed to reach eyewitnesses who remembered the workcamp and the suffering of its prisoners.

Wojciech, a resident of Bliżyn (born in 1935) remembered death of three Jewish women: “There are three women buried there for sure, one of them died of typhoid. The other one… I’ll tell you quickly. In March 1943 they brought Jews from different ghettos […], mostly professionals: tailors and others, maybe 3-4 thousand of them, with families, wives and kids. Children were very young but also older ones. But after 2 or 3 months they started taking away the children. There were scenes… I can’t describe it… [crying]. One Jewish woman, as young as you, grabbed the side of the car and ran after it through the gate. I was on the bridge fishing, about 15 metres from the gate. She ran through the gate and the German who was standing in the vehicle (there were several cars) hit her in the head with the butt of his rifle. She fell flat. I fetched my mother and we pulled her together next to a low wall […] and two trickles [of blood] came out and she died [crying.] And another Jewish woman came to us and asked my mother whether there was someone from Białystok here. My mother said that she didn’t know but maybe there was […] My mother said: Go towards the tower. They were trading next to the tower. And she left. A Ukrainian sat there and he shot her. How did he know she was Jewish…? He shot her in the stomach, I went there with my mother, she was lying under a tree. She died there and she’s buried there.” (Bliżyn, 8 May 2015.)

The terrible day of the deporation of Jewish children out of the Bliżyn workcamp which – according to our interlocutors – took place in mid-1943 is recalled by the former prisoner, Helene G.: “One day Germans came and took all the children. My uncle (Eugeniusz Trejwisz, a doctor in the Bliżyn workcamp) had two friends who were doctors. Each of them had a child and they took away those children […]. I think they killed them straight away. [The parents] were in despair. One doctor had a breakdown and didn’t survive the war. He was tall, large but he was so broken that he died. His wife survived, later she arrived in Australia. I knew her, she re-married and she had her life but of course she remembered that child she lost. One family was called Cytryn, doctor Cytryn. […] I don’t remember the other doctor’s name. […] One doctor started running around and into the barb wire… He wanted to go with the children.” (Warsaw, 19 May 2015.)

A very moving event related to the murdered children is recalled by Wojciech: “[A German] opened the door and [said]: Komme! And I saw lots of toys left by these Jewish children. Lots of toys: dolls and others, beautiful. There was a large green car with a cab […], it was giant, beautiful, with red wheels, I remember it. [The German] gestured for me to take it but my mother said not to take anything after the Jews who were surely murdered. And so I said no. I didn’t take it. Judging by the amount of the toys, there were many children. Later on, these toys ended up in the river. There was a river flowing through the workcamp, [it was called] Kamienna.” (Bliżyn, 8 May 2015.)

On the 23rd of July 2014, a GPR survey of the location indicated by the witness was carried out (GPS: N51°06.142′E020°45.432′). The results of GPR surveys confirm the presence of numerous ground disturbances. This area is relatively densely wooded and has underground tree roots infrastructure which makes it difficult to accurately identify mass graves locations. The place requires further in-depth research.

The result of the aerial photography query for this area is negative. 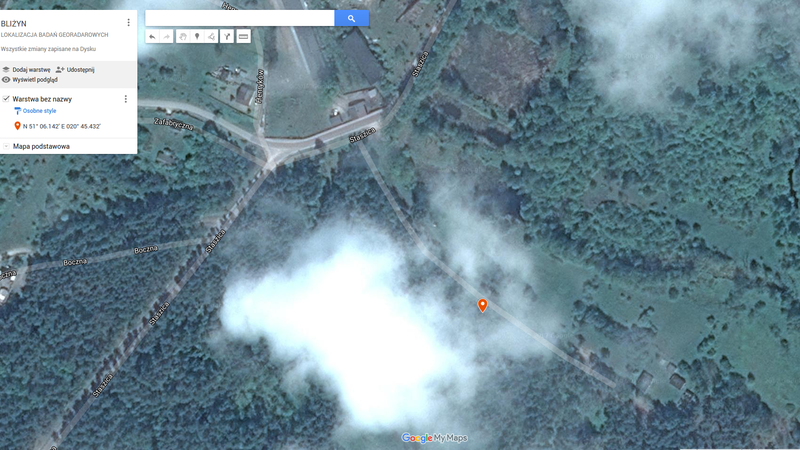 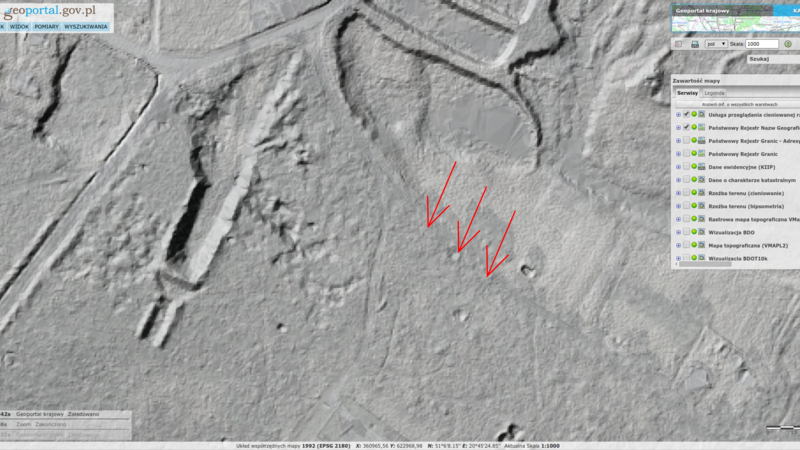 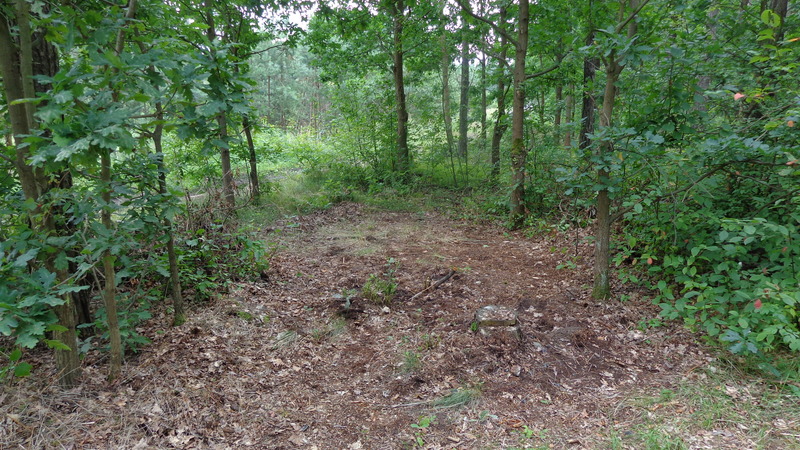 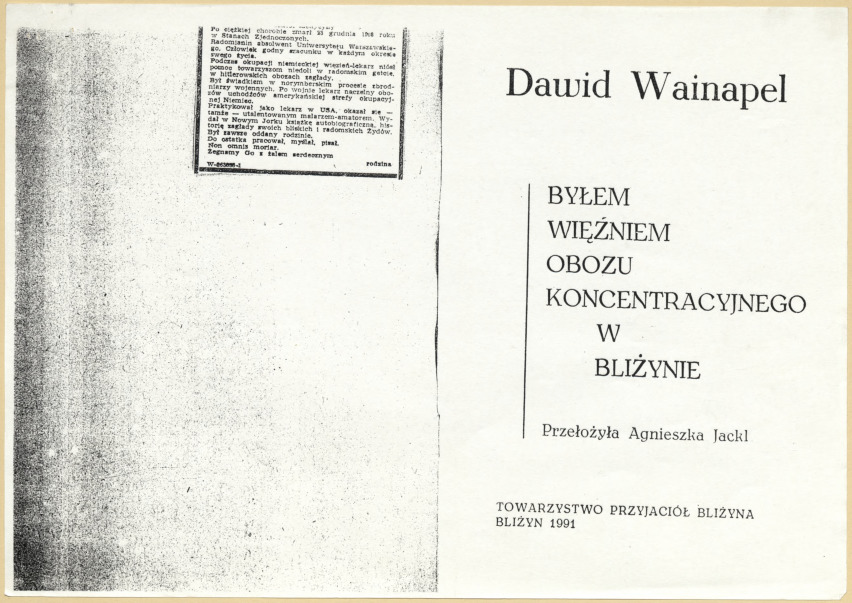 We are still looking for information on the identity of the victims and the location of Jewish graves in Bliżyn. If you know something more, write to us at the following address: fundacjazapomniane@gmail.com.

Recording of the Zapomniane Foundation (audio file), name: Helene [survivor of the Holocaust: she passed through the Białystok ghetto, from which she was sent to the labor camp in Bliżyn], place of residence: Australia, date of birth 1935, subject and key words: Jewish graves in Bliżyn, interviewed by Agnieszka Nieradko, Warsaw 19 May 2015.

IPN GK 163/47, selected documents regarding victims of Jewish nationality from Bliżyn from the files of the Chief Commission for the Examination of German Crimes in Poland, Questionnaire. Executions. Graves. Questionnaires about mass executions and mass graves – kieleckie province.